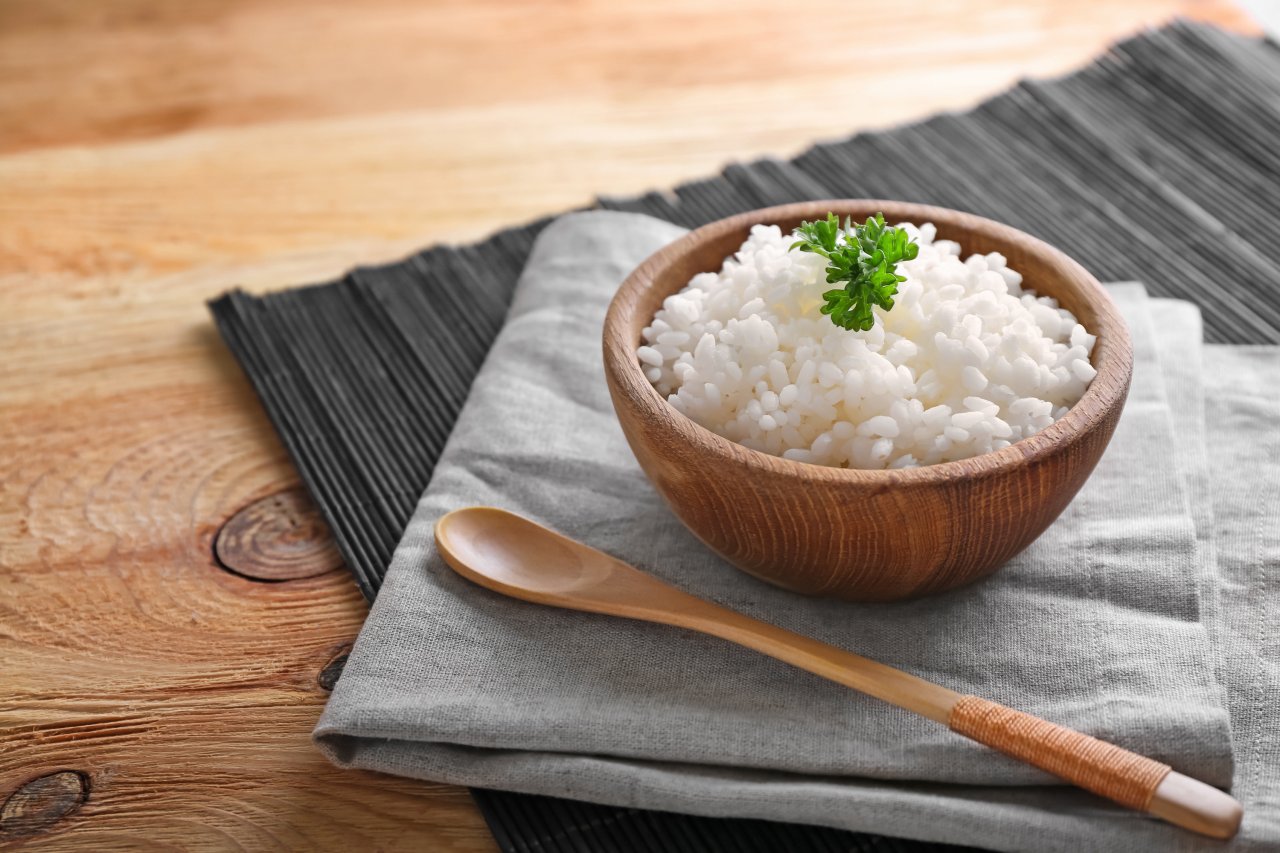 (123rf)
In an era when one-person households or double-income families are increasingly becoming the norm, families gathering around the dining table for a warm home-cooked meal can be considered a special occasion.

Finding the right type of meal at the right moment can make one’s day and Koreans turn to “baekban” for the comforting taste of home.

Baekban’s literal definition is “white rice,” but is generally understood in Korea as home-cooked style meals that consist of a bowl of rice, soup and banchan, or side dishes.

In a nationwide survey of 2,000 adults on where they go when craving home-style meals, more than 58 percent of the respondents selected “baekbanjib” or baekban restaurant, as their first choice, according to market research firm Macromill Embrain.

“Tell me what you eat and I will tell you what you are,” said Jean Anthelme Brillat-Savarin, a famous French lawyer and well-known gastronome, in his book, “The Physiology of Taste,” published in 1825. Finding the link between the type of food one eats and one’s identity has long been a topic of interest throughout human history, apparently. And when it comes to Korean sentiments and traditions, there is a lot to be said about baekban.

At popular restaurants in Korea today, side dishes are usually not the highlight. As soon as the main menu is put on the table, the rest stay untouched.

But with baekban, every side dish counts.

One’s taste palate developed during childhood becomes a lifelong standard, and at the core lies home-cooked meals. Therefore, your favorite baekban place comes to be associated with the region you come from. There are no strict rules as to what ingredients should be used in baekban, which leaves it in the hands of the boss in the kitchen, traditionally mothers, to choose from ingredients they happen to have.

“What could ever beat the warm sincerity of a mother’s heaping bowl of rice prepared on a wicker tray?” said Huh Young-man, one of the most beloved comic book artists born in Yeosu, South Jeolla Province. It is written in his book, “Huh Young-man’s Food (Korean title: Huh Young-man’s Baekban Trip),” that was published last year.

Finding the right place where you can feel the nostalgia of home takes both patience and passion.

Typical baekban eateries have no break hours, with baekban ready to be served at any time of day.

But be warned: Popular baekban places can have long waiting lines, especially during the peak lunch hour when office workers come in groups. 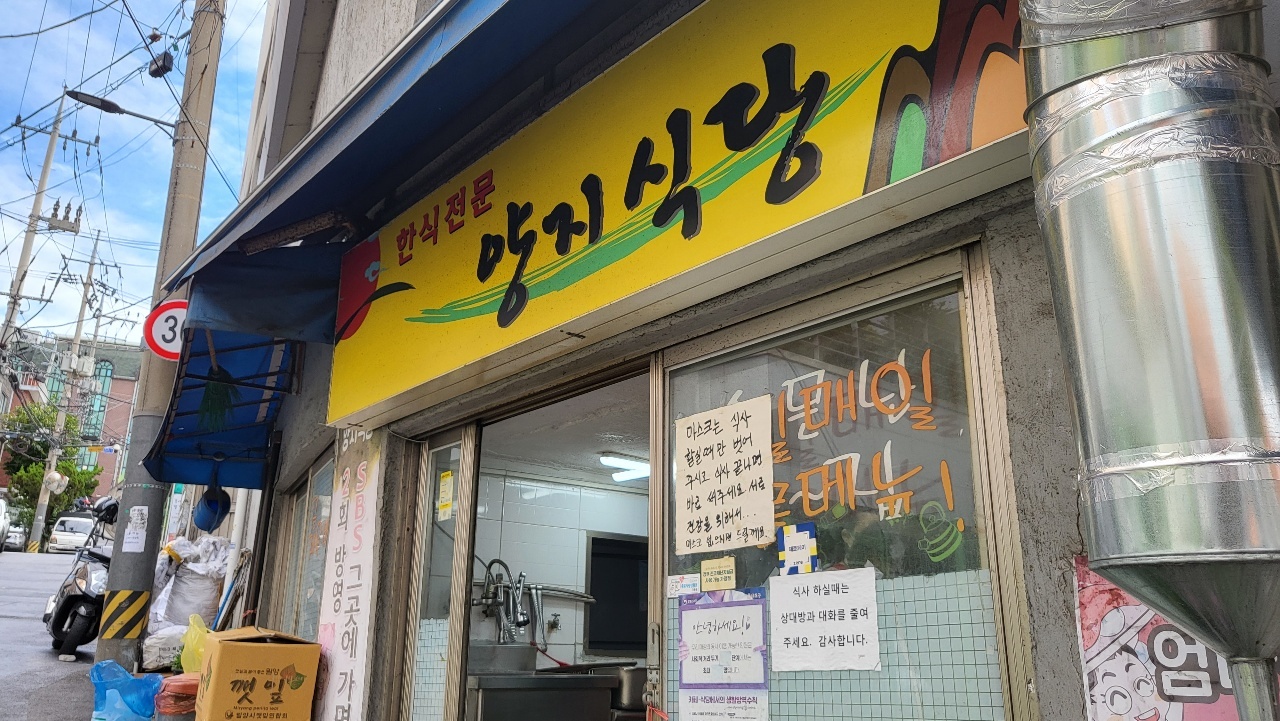 Entrance to Yangji sikdang (Kim Hae-yeon/ The Korea Herald)
Located a block away from Jongno Flower Market Alley, Yangji sikdang is a 10-minute-walk from Dongdaemun Station exit No. 1.

Inside, a small open kitchen is visible through the narrow hallway that leads into the dining area.

With old-fashioned interior and lighting fixtures and the absence of a menu, the only signs are handwritten requests on piece of a paper stuck to the wall: “Please talk in a quiet voice while eating. Thank you.”

Once you sit down, baekban is ready within three to five minutes. A bowl of white rice, soup and eight types of side dishes are served at once on a nickel-silver tray.

Although different side dishes all go well with rice, the first spoonful of soft and fluffy rice tastes just right.

(Yangji sikdang owner) Pyun Soon-ja, owner-chef of Yangji sikdang, prepares galchigui, pan-fried cutlassfish. (Kim Hae-yeon/ The Korea Herald)
“I have made baekban here for 29 years, and haven’t left the restaurant, not for even for a week.” Pyun Soon-ja, 68, owner and head chef of Yangji Sikdang said. Having put two kids through college who are now both married and working, Pyun feels that she has done her job, and has happy memories overall despite some hardships along the way.

Asked what baekban means to her, she answered without hesitating. “A source of strength,” she said. “I make baekban for my customers, as if they were my family and children, that’s all I do.”

While Pyun was grilling fish in the kitchen, her bandaged-wrapped right arm was noticeable. Pyun added with a big smile that she will keep working as long as her mental health allows her to.

Baekban at Yangji Sikdang costs 6,000 won ($5.05). The restaurant is open five-days a week from 10:00 a.m. to 2:00 p.m. Nurung-ji soup, scorched rice infused in hot water that Koreans eat after a meal to help digestion, is offered on your way out. 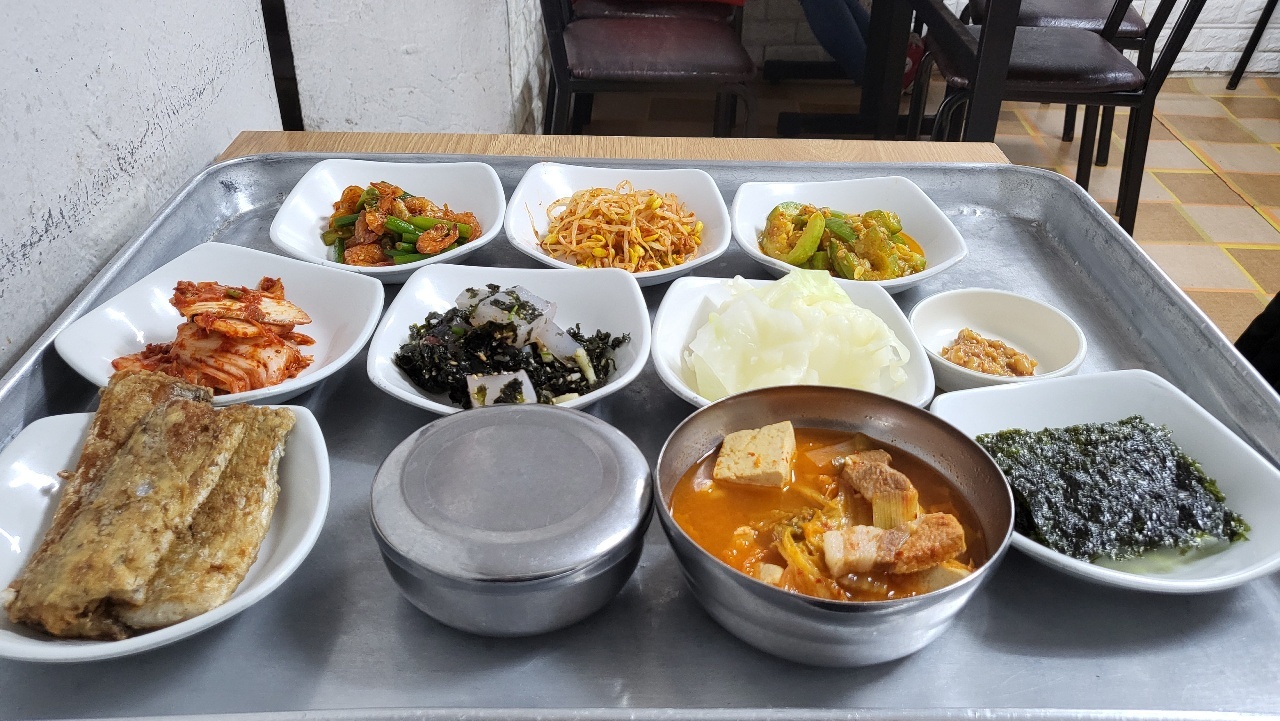 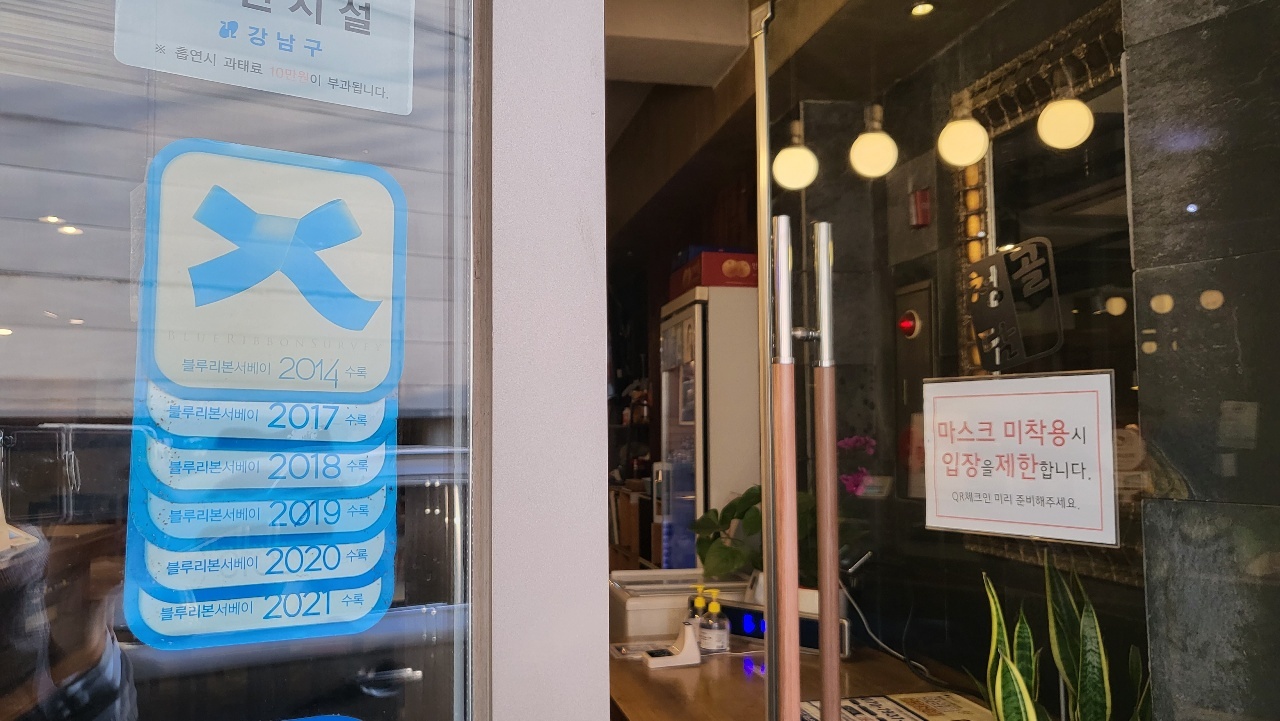 Award-winning restaurant stickers given by Blue Ribbon Survey are posted at the entrance of Cheongdamgol. (Kim Hae-yeon/ The Korea Herald)
A 10-minute walk from Apgujeong Rodeo Station Exit No. 3, neighboring Dosan Park, Cheongdamgol is located in Cheongdam-dong, southern Seoul.

Fancy cars are parked in the narrow alleys of this posh district in Gangnam.

The modest-looking restaurant welcomes visitors with a series of Blue Ribbon Survey badges awarded five years in a row since 2017, stuck on the main door.

A basic baekban with eight side dishes is priced at 8,000 won, and you can add various types of fish or meat for an additional price of 4,000 won. 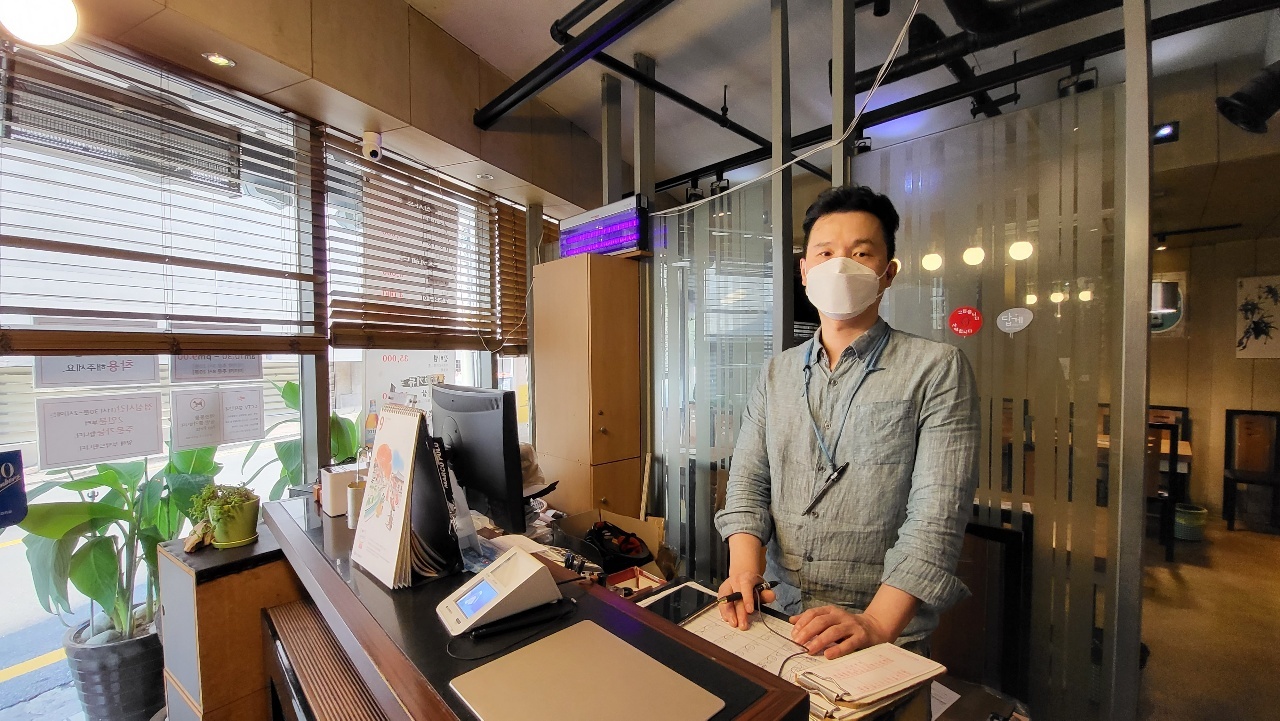 Baekban places are very rare in this neighborhood, but the scarcity makes it easier to bond with loyal customers, according to Jang. “I’ve seen little kids grow into college students, and visiting with her husband and families. I feel very proud to have been a part of their story, providing good food,” said Jang.

Before the pandemic hit, celebrities and fans of stars would visit often. Daniel Lindemann, a TV personality from Germany living in Korea, still visits the restaurant once in a while. “Daniel likes mackerels, so he often orders an extra piece,” said Jang with a friendly smile.

The lingering pandemic has led to slight changes in the menu in order to maintain the same price, but Jang tries to keep the best quality in every side dish the restaurant offers.

“I would be lying if I say I haven’t thought of opening franchises. But it’s nearly impossible for baekban restaurants, since quality control of all side dishes is extremely demanding. Nonetheless, people still have prejudice that a pasta for 20,000 won is worth the price, but baekban should be cheaper,” Jang said, adding that he hopes visitors can appreciate the time and sincerity put into preparing baekban. Cheongdamgol is open seven days a week, and last orders need to be made before 9:30 p.m. 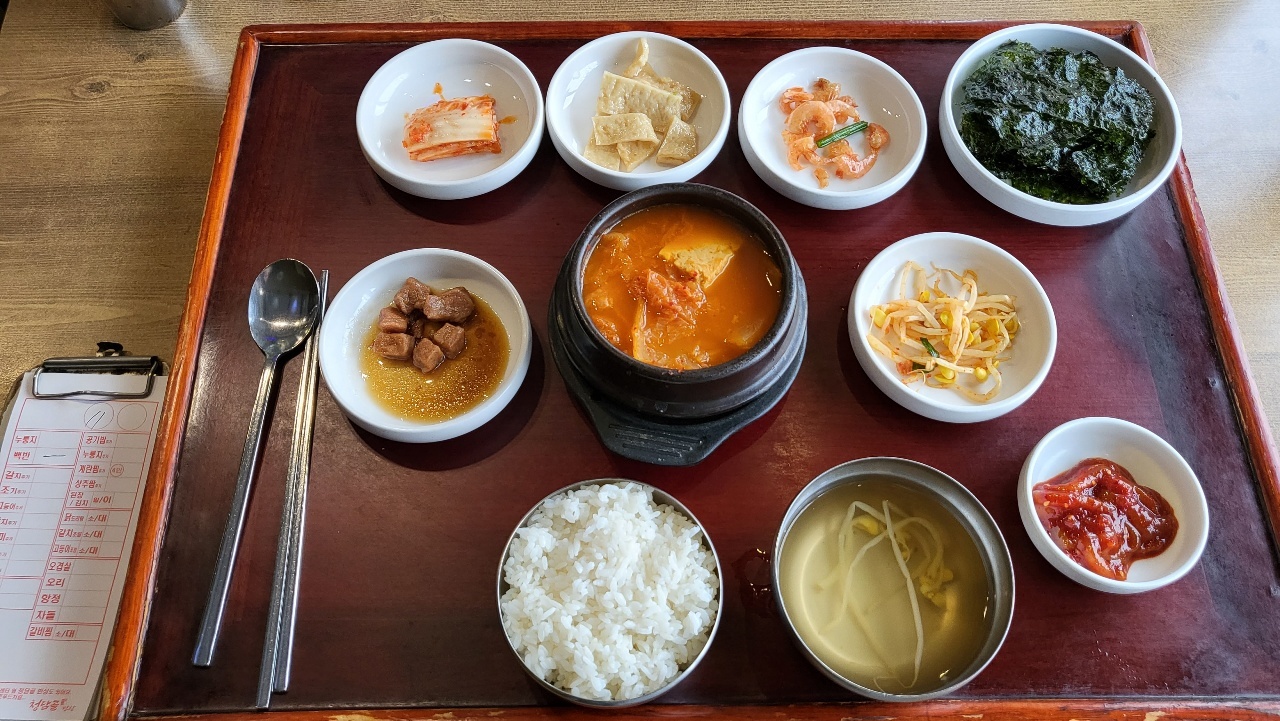 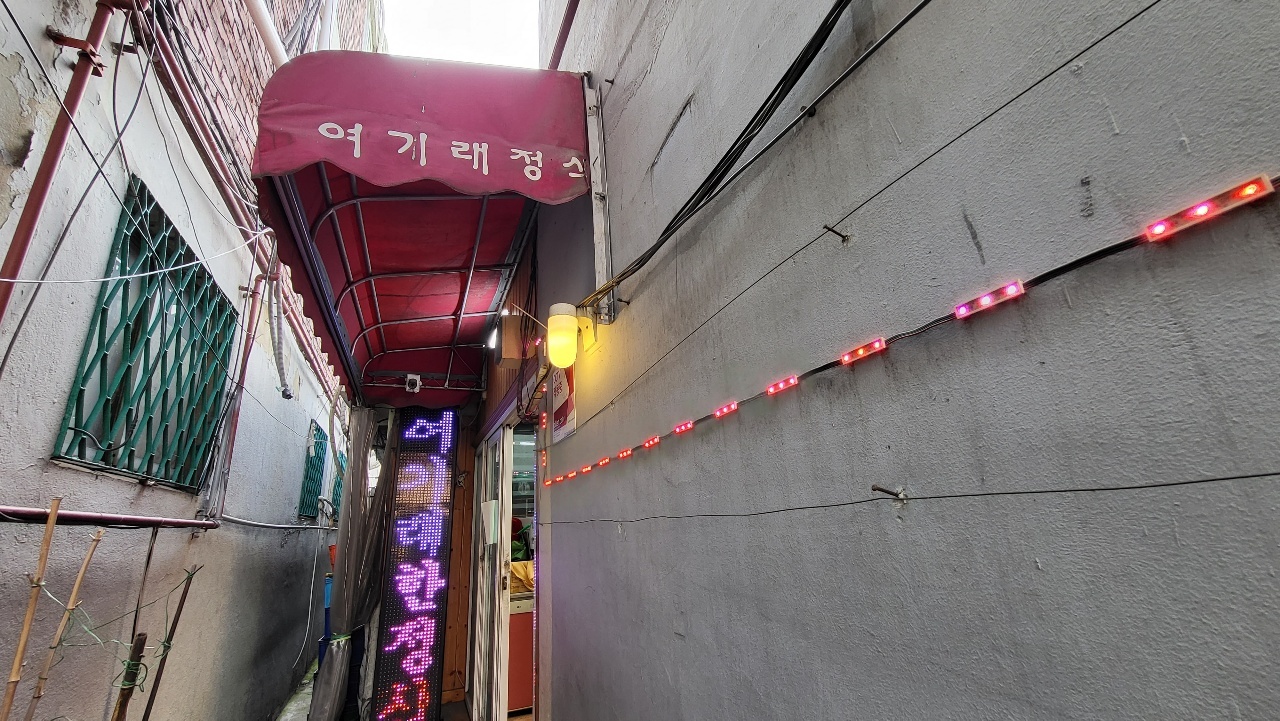 The restaurant’s signage is quite hard to spot, but look out for a flower shop right next to it.

The main menus are godeungeo (mackerel) jeongsik and gulbi (dried yellow corvina) jeongsik, each priced at 9,000 won and 12,000 won. Jeongsik is another word for baekban. Countless number of side dishes are served, which the owner says changes from time to time depending on the number of customers visiting on the day. When The Korea Herald visited on a late September afternoon, a total of 17 side dishes were served for godeungeo jeongsik.

“I am a regular customer here since I live in the neighborhood,” said a middle-aged visitor. “To be honest, sometimes banchan are too salty, and other times bland. But I enjoy them all without complaining, because our moms were like this when we were young,” the visitor said with a laugh.

Although there have been complaints on social media recently that the restaurant does not accept solo customers during crowded lunch hours, the place is a popular neighborhood restaurant. Yeogirae opens Monday through Saturday from 11:00 a.m. to 8:30 p.m., and is closed on Sundays. 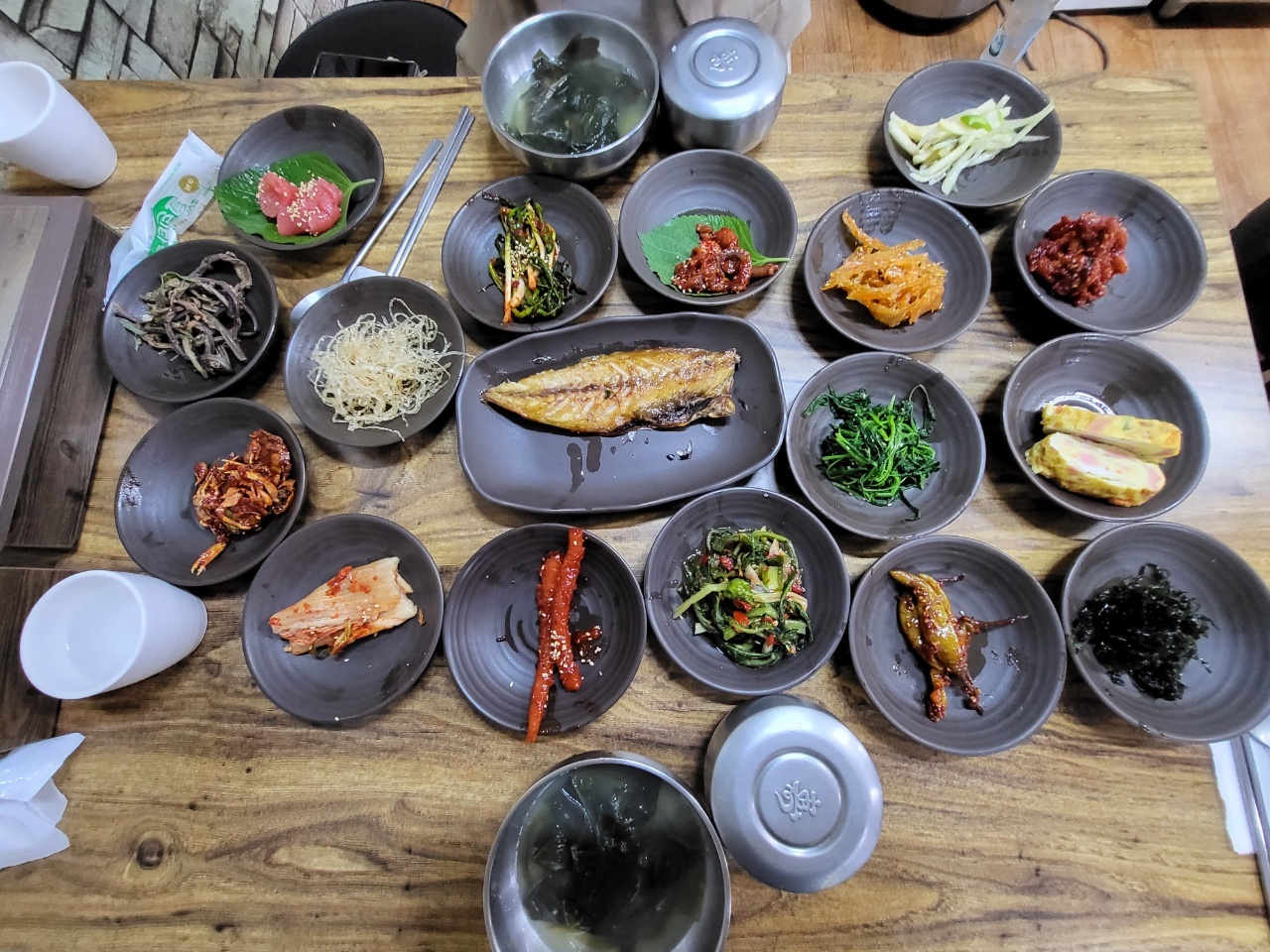