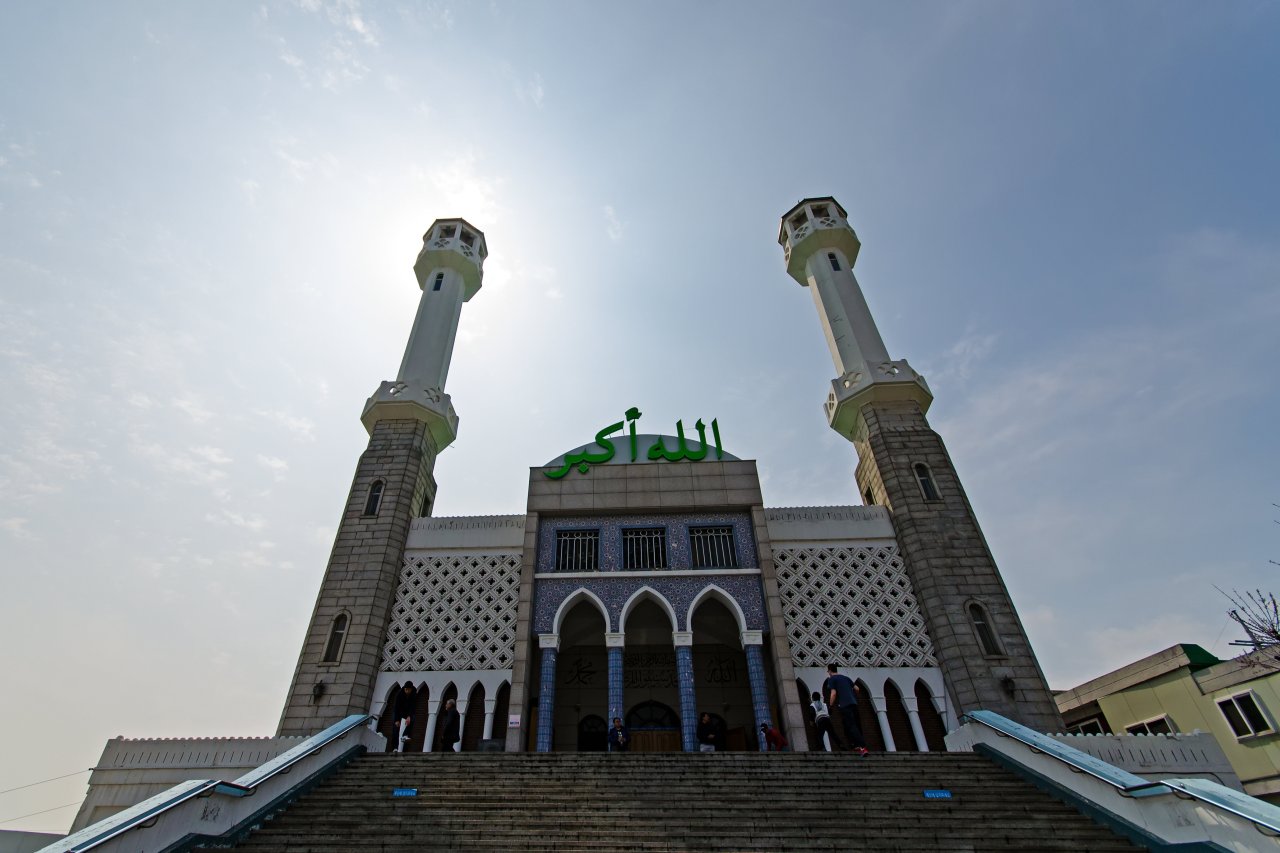 Seoul Central Mosque in Yongsan (123rf)
Muneer Ahmad, 47, who has run Islamic Book Center in Yongsan, Seoul, has rarely experienced hatred or discrimination because of his religion or religious clothing in his 20 years in South Korea. Most of the time he encounters reasonable Koreans.

Even when he walks in religious clothing with his wife, who wears a hijab headscarf, most people “just feel strange,” but do not “feel offended.”

“When I talk about my culture or religion, first of all, Koreans are not too much interested in it because they are busy with their own work. Second, when they hear it, they mostly have empathy and kindness toward me,” Ahmad said.

Several more Muslims studying or working here said that Koreans are quite tolerant of other religions. They are rarely offended, angered or hurt in their daily lives due to discrimination against their faith.

Korea is one of the rare countries where people without religion outnumber religious people, according to Seong Hae-young, associate professor at the College of Humanities of Seoul National University.

Forty-six percent of Koreans identify as belonging to a religion while 54 percent do not, according to the latest survey done by the National Statistical Office in 2015.

“Even most of the people without religion have a religious worldview and do not hate other religions. Violence or bombing (and terrorism) against other religions are rarely seen here,” Seong said.

As for Muslims, conflict is rare because they have never done anything to be antagonized in Korean society in a way that stands out due to their small number, he said.

Here, Muslims account for less than 1 percent of the total population, while Protestants account for 20 percent, followed by Buddhism (16 percent) and Catholicism (8 percent). According to the Korea Muslim Federation, it is estimated that there are 35,000 Korean Muslims and about 100,000 foreign Muslims.

When looking more closely, however, Koreans -- generally exposed to Christian-dominated American media and culture -- still have a psychological bias against Islam widely followed in the Middle East.

The most potent images of Arab and Islam for Koreans are “terrorism, war, conflict and danger,” based on a survey released by professor Kim Su-wan of Arabic Interpretation and Translation at Hankuk University of Foreign Studies. The survey was released in 2016, but the perception has not changed much for many Koreans.

A 30-year-old Korean man surnamed Kim, who converted to Islam from Catholicism about two years ago, has never been verbally attacked because of his religion. But he is puzzled whenever he sees malicious comments about Muslims online.

“When I told my parents (that I became Muslim), they were worried at first. They asked whether I was involved with some terrorists,” he said.

But as he continues to speak about his religion publicly on his YouTube channel, his parents have begun to understand him little by little.

“My friends also seemed to think it (my religion) is weird at first, but they don’t hate it or anything. I’ve never actually seen anyone hostile when I said I am a Muslim,” Kim said.

But what he sees online is different.

“On the internet, I see many swear words and they say Islam is evil and a terrorist group. Honestly, I don’t know why there’s such a big difference (between online and in person).”

A couple more Korean Muslims declined to be interviewed, saying they and their families had suffered from hate comments online after previous interviews with local media.

In articles related to Yemen refugee issues, online commenters described Muslims as terrorists, rapists and criminals that Korea should not accept.

Bookseller Ahmad is also aware of the poisonous comments. He believes they are not left by Koreans.

“Many non-Koreans live here. They are the ones who happen to learn the Korean language, and they try to fuel their anger. They benefit from fueling extremism. Most of them are lonely people. They feel powerful with angry comments.”

As Muslims begin to increase their presence here, conflicts start to loom in the physical world too.

Two Muslims, Imtiaz Mahmud, 31, from Bangladesh, and Asad Ullah, 37, from Pakistan, both of whom are postdoctoral research fellows at Kyungpook National University in Daegu, have also rarely faced discrimination during their seven-year stay in Korea.

But this year, they have faced conflict surrounding the construction of their mosque in a residential area in Daegu.

The mosque was used as a place where more than 100 Muslim students studying at Kyungpook National University prayed. It is now under construction with permission to extend the building due to space shortages, they said.

“We have been here for seven years. We bought this place in 2014 and started our worship in the existing building. We have very good relationships with neighbors, and on some occasions, we shared gifts,” Ullah said.

“Until Feb. 5, everything was going smoothly. When the metal beams were erected, suddenly neighbors gathered in front of the mosque and started protesting, complaining about noise and odor,” he said.

Hundreds of residents near the mosque submitted a petition calling for the suspension of the construction. The regional office accepted the request and ordered building to stop on Feb. 16.

“Now they are just saying that if we build a mosque the people of the whole area might become Muslim, and the area property prices could fall. Well, still, we don’t find a valid reason behind this. Rather we believe it is just a part of Islamophobia.”

Last month, the court temporarily suspended the order to stop construction of the mosque. And this brought backlash from residents again.

Seo Jae-won, a representative of residents opposing the construction, said, “Who would like it if religious facilities -- whether they are churches or mosques -- come to the middle of residential areas?”

“It’s noisy and women are worried about going out at night. I received more than a thousand opposing signatures.”

In early September, a petition titled “Protect South Korea” was posted on the Cheong Wa Dae website, in which a petitioner demanded that construction of the mosque be stopped. More than 120,000 people supported it.

The writer said huge Islamic forces seem to support the construction with strategies to convert Korea to Islam. “They are already a threat to our residents.”

In August, about 400 Afghans -- most of them Muslim -- fled to Korea over fears of Taliban retaliation for having worked with South Korean projects in their country.

Despite their life-or-death situation, some Koreans opposed accepting them as refugees. In a petition filed on the Cheong Wa Dae website in the month, a petitioner demanded Korea not accept them as refugees. “As soon as refugees are received, we begin to be exposed to terrorism,” the writer said. More than 30,000 people agreed.

One civic group held a press briefing in Seoul last week calling on the government to stop issuing visas to the Afghans and that it close mosques across the country. 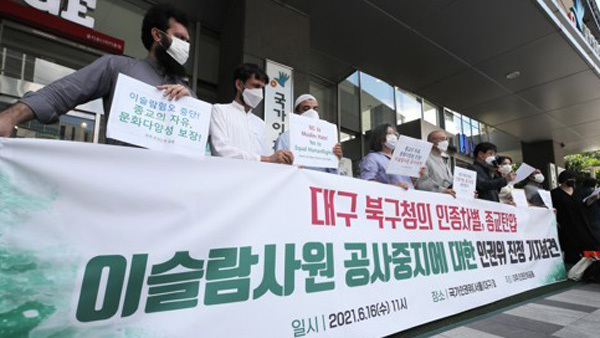 (Yonhap)
‘We are not ready’

Lee Hee-soo, a professor in the Department of Cultural Anthropology of Hanyang University, said there is a lack of understanding about Islam among Koreans.

Lee said Koreans still look at the Middle East using a 20th-century set of keywords, such as “oil” and “terrorism.”

“Because we lack channels to access the substance of their culture, we do not look into the humanistic values of their society, the level of history and culture,” he said.

More serious than the Daegu mosque case, a Korean bias was revealed in the 2018 Jeju Yemeni refugee situation, Lee said. A few years ago, about 500 people fleeing war in Yemen claimed asylum on Jeju Island. Only two were given refugee status.

“Despite Korea’s capacity to accommodate Muslim refugees and workers, we do not embrace them as extreme feminist groups oppose them, distinguishing them as potential sex offenders,” Lee said.

Oh Jung-il, a professor at the School of Public Administration of Kyungpook National University, said Koreans are still not prepared to see Muslims as full members of society.

Koreans still view people from multicultural families -- including Muslims -- as people in need of help, Oh said, as opposed to equal members of society.

“Conflict has not even begun yet,” he said. “When their children become lawmakers, judges, doctors, professors or even presidents, do you think native Koreans will accept them nicely? Will they obey their authority? I don’t think so as for now.”

“If we can truly obey their authority regardless of religion, gender or race, that is when we can say we embrace diversity and become a truly multicultural society,” he said.

The concept of “us” is a strong force in Korean culture, and to be counted as “one of us” in any group comes with privileges big and small within its boundaries. However, for those who fall outside the boundaries of “normal,” life in Korea is riddled with hurdles and sometimes open hatred. In a series of articles, we take a closer look at the biases that exist in Korea, and the lives of those branded as “them” by the mainstream of society. -- Ed.