(123rf)
Chuseok, the traditional fall harvest holiday celebrated on the 15th day of the eighth month in the lunar calendar, is an occasion when family members get together to give thanks for the past year while wishing good fortune for the remainder of the year over a special meal.

The festive mood of Chuseok remains the same today, but social customs deeply embedded in the holiday have changed. Just a few decades ago, men in the kitchen during Chuseok, or any time of the year, was a rarity. But today, more men are taking part in the preparations for the large family gathering.

Another noticeable change is the number and variety of dishes served.

Instead of a Chuseok table laden with rows of dishes, many households today pick only a few to lessen the burden of meal preparation and to allow all family members to spend more time together instead.

Meanwhile, due to the COVID-19 pandemic, this year’s Chuseok gatherings remain restricted. Family gatherings at home are allowed for up to eight people, including up to four people who have not been vaccinated, from Sept. 17 to 23 during the Chuseok holiday season under the current social distancing rules.

For large extended families, this Chuseok might be different from usual, but a hearty home-cooked meal can still warm up the soul.

Following are recipes for three all-time Chuseok favorites. The degree of difficulty varies from beginner to advanced. 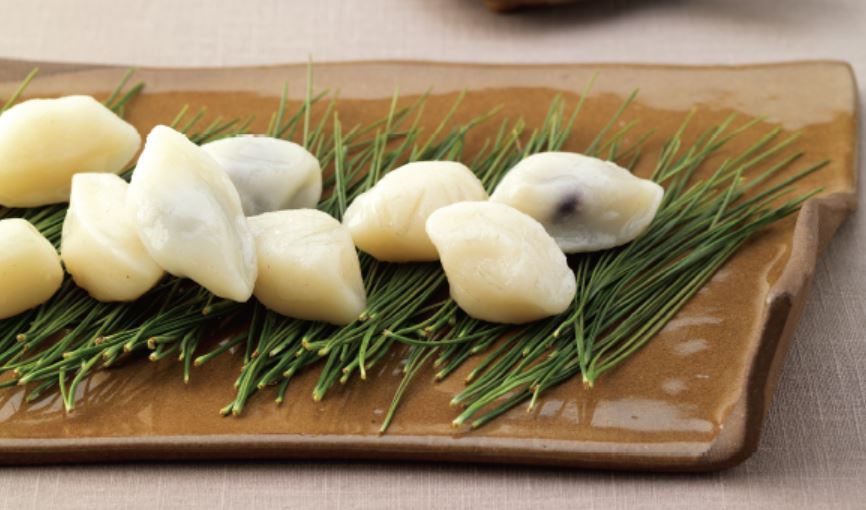 For farmers in the traditional agricultural society, the passing of time was measured according to the waxing and waning of the moon, and offered songpyeon to ancestors, thanking them for a bountiful harvest.

The ingredients for songpyeon vary slightly by region. For example, in Gangwon Province where potatoes are widely cultivated, the root vegetable is used in making the dough. In the Chungcheong provinces, yellow pumpkin, and in the Gyeongsang provinces, ramie leaves are used. The various types of songpyeon make it more enjoyable when families from different regional backgrounds gather to make them together.

Add boiled water to the rice flour and knead well until a smooth dough forms. Let the dough rest in a plastic bag for 30 minutes.

To make the sesame filling, toast sesame seeds in a frying pan or oven and crush. Mix them with honey to form a paste. For the bean filling, mix beans with salt. When using dried beans, rehydrate before using.

Separate the pine needles from the branches and get rid of any black tips. Rinse well and drain in a colander.

Make balls out of a small piece of the dough about the size of a chestnut. Using your thumb, press gently in the middle of the dough ball to form a small well, and fill them with sesame filling or bean filling using a spoon. Seal the well making sure the filling doesn’t leak out and mold it into a shell or half-moon shape.

Steam for 30 minutes until they are cooked well. Remove songpyeon from the steamer. 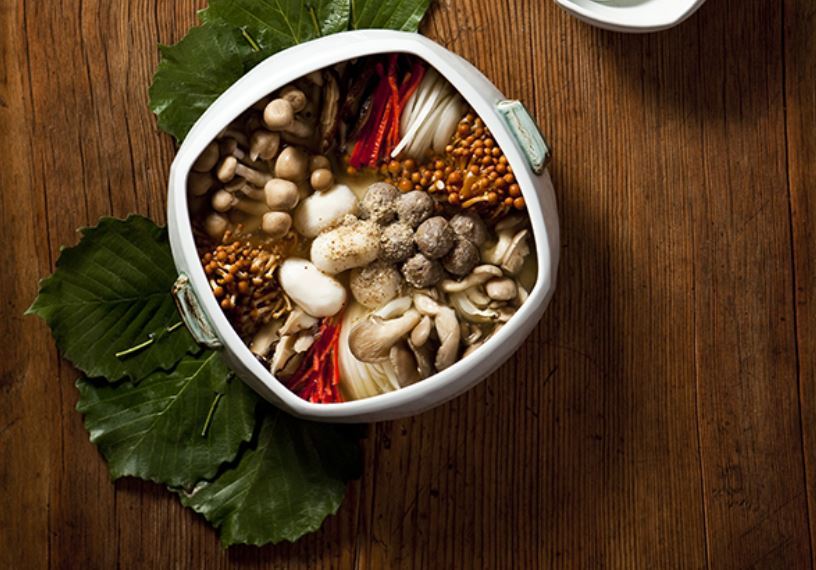 Torantang (Korean Food Promotion Institute)
Torantang, also known as toranguk or taro soup, is featured as one of the most representative Chuseok dishes in “Nongga Wollyeong-ga,” a popular farmhouse song dating back to the Joseon period.

The soup is a mix of savory and nutty broth, tender beef brisket, with soft and nutty taro.

Resembling the shape of potatoes, toran is relatively small in size and has a soft but chewy texture. It is best enjoyed in the fall.

Toran is alkaline, which helps digestion and is effective in preventing constipation by stimulating intestinal movements. This makes torantang a perfect complement to the heavy Chuseok meal.

A little bit of sesame oil and pepper

120 grams of mushrooms and toran (taro)

Whites of one egg

Mix beef with seasoning to make meatballs, apply egg whites, roll them in a pan, and cook them slightly.

With 5 cups of water, boil and add taro. Cook for another 10-15 minutes over medium heat. Soak them in cold water, then peel off the taro with a potato peeler or small kitchen knife. After, soak them in rice water to remove the stinging taste.

Heat all the ingredients in a pot and bring the broth to a boil.

Season it with soy sauce, add perilla seed powder at the end and boil it for a little longer. (Recipe from KFPI’s hansik magazine website) 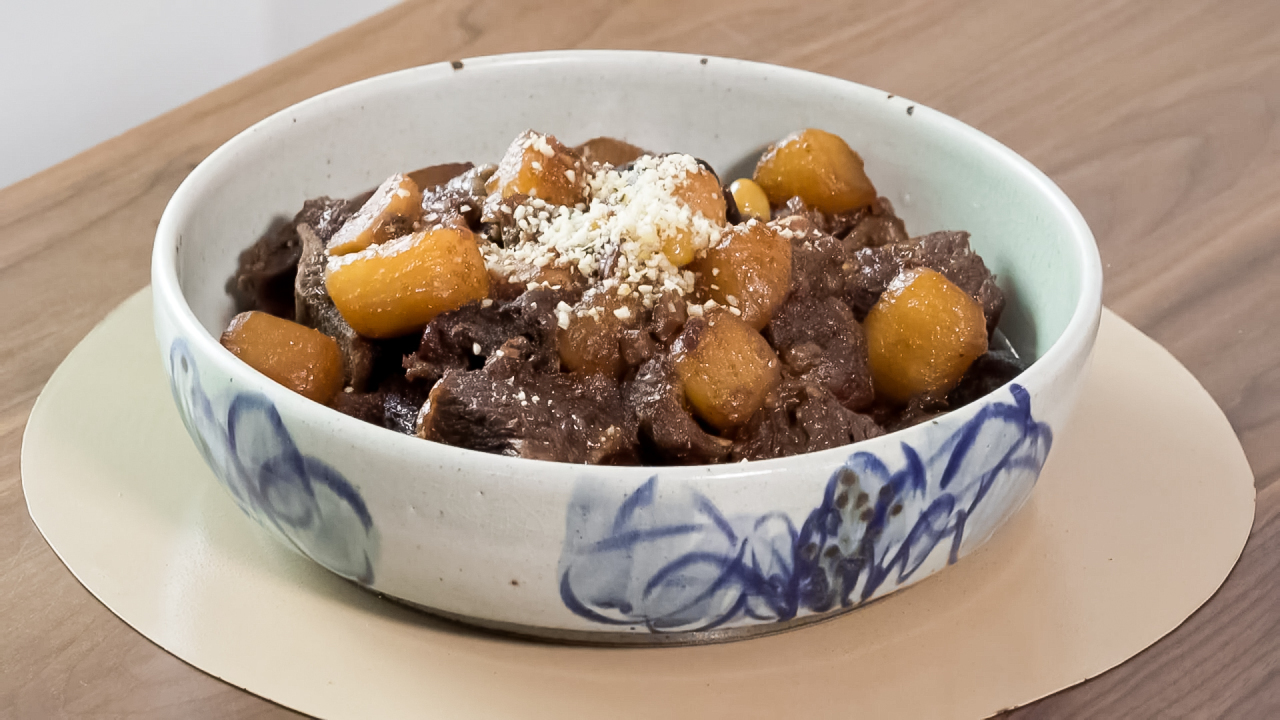 In modern day Korea, galbijjim is served to celebrate special occasions and is also popular among international diners.

Braised meat is a healthier option compared to grilling and the soft texture of galbijjim is easier to digest.

Mix all the marinade seasoning (soy sauce, water, minced garlic, minced ginger, chopped green onions, sugar, pureed Asian pear and rice wine) and set it aside in a big bowl. In a large pot, mix seasoning with cleaned ribs, making sure that the seasoning liquid covers the meat.

The short ribs should be boiled in the marinade mix until the meat is tender and feels soft to the touch. Add the mushrooms and dried dates first. Let it braise at medium high heat for about 40 minutes. Then you can add the radishes, carrots and chestnuts and braise them for another 30 minutes until all the vegetables have soaked up the seasoning.

Rice cakes and ginkgo nuts can be added to give color and texture to the dish. Before serving, add 1 tablespoon of sesame oil and pepper to taste.
(Recipe from “Diana’s Table” by Diana Kang)