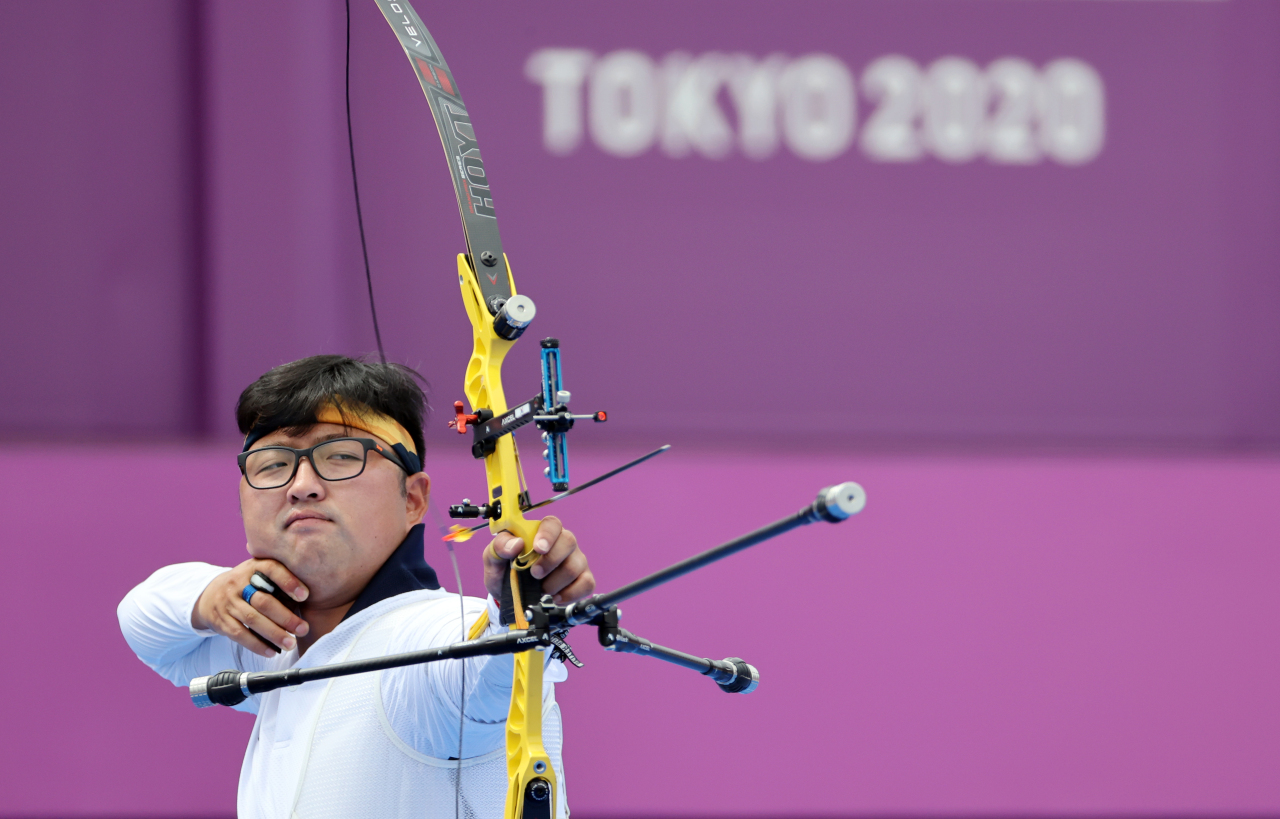 Kim Woo-jin shoots his arrow during the semi-final of the men's individual event at the Tokyo Olympics at Yumenoshima Park Archery Field in Tokyo on Saturday. (Yonhap)
A two-time Olympic archery gold medalist Kim Woo-jin suffered a shocking loss to a 20-year-old archer from Chinese Taipei in the men’s individual event at the Tokyo Olympics on Saturday.

Check that: Kim doesn’t think it was so shocking at all.

“I don’t appreciate the use of the word ‘shocking,’” Kim said in mock anger, after losing to Tang Chih-Chun in the quarterfinals at Yumenoshima Park Archery Field in Tokyo. “Nothing is guaranteed in sports, and no one can predict results. That‘s why people watch and fall in love with sports. I am disappointed that I didn’t get to show everything that I‘d worked on, but I feel good right now.”

Tang beat Kim by the set score of 6-4. In the individual match, archers each shoot three arrows per set. A set win is worth two points and a tie is good for one point. The first to reach six points is the winner.

Asked how that uncharacteristic score happened, Kim, sounding slightly agitated, said: “I just shot it poorly. That’s how it happened.”

“I can’t undo whatever took place in the past,” Kim added. “I am disappointed with how the event played out. But that’s life. You can‘t always have a happy ending.”

South Korea was going for a clean sweep of archery gold medals in Tokyo. The country had already won titles in the mixed team, men’s and women’s team, and women’s individual events.

Kim insisted he didn‘t feel any pressure to try to complete the unprecedented gold medal sweep.

“I did get a little more nervous than I normally do at other events,” Kim conceded. “But I have no more arrows left to shoot here. I’ll have to go back to the drawing board and work on some things, and get ready for the next Olympics in three years’ time.”

Despite Kim’s misstep, winning four out of five gold medals is still an outstanding accomplishment for South Korea. Kim said it was his biggest takeaway from Tokyo too.

“I think there were maybe some whispers that Korean archery wasn’t quite as strong after the Rio Olympics (in 2016),” Kim said.

"I think we were able to silence them here.” (Yonhap)