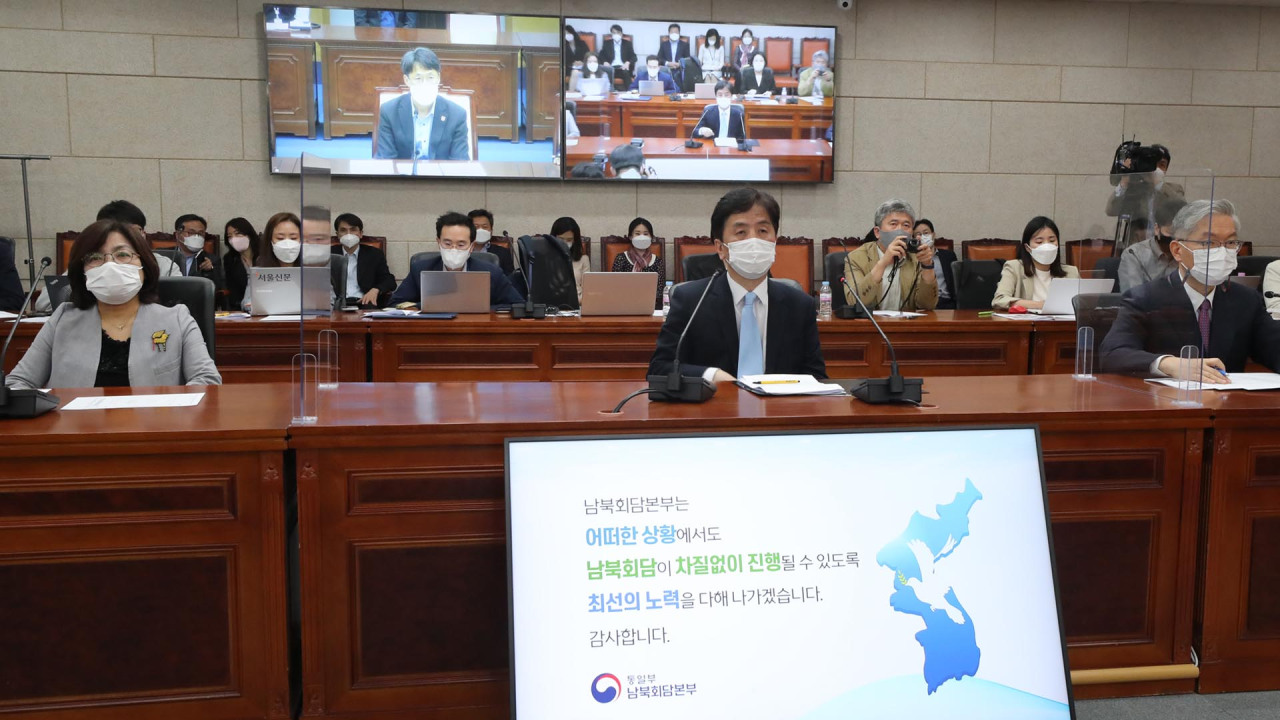 The Unification Ministry unveiled a new video conference room exclusively for inter-Korean talks in April. (Yonhap)
Cheong Wa Dae is considering setting up a virtual meeting system for inter-Korean talks, signaling that working-level talks could start soon following Tuesday’s restoration of the hotlines between the two Koreas after a 13-month hiatus.

“The direct hotlines may not be enough for intensive talks and negotiations,” President Moon Jae-in’s senior secretary for public communication, Park Soo-hyun, said during a radio interview on Wednesday.

“Building a virtual meeting system may be one of the options to have more convenient conversations.”

His remarks came one day after South and North Korea reopened direct communication lines. Both countries’ governments confirmed that the hotline restoration was the outcome of months of exchanges between Moon and North Korean leader Kim Jung-un.

Restoring the communication links signaled a thaw in the almost collapsed diplomacy between the two Koreas since the breakdown of the second summit of Kim and then US President Donald Trump in Hanoi in early 2019.

In June last year, the North unilaterally cut off all communication channels with the South in protest over Moon’s “failed” mediator role, blowing up an inter-Korean liaison office in the North Korean city of Kaesong a week later.

Park called the hotline restoration “the lowest-level starting point” for the ultimate goal of denuclearization of the Korean Peninsula, saying: “That would pave the way for future discussions on more realistic and agreeable matters like a hotline (between the two leaders) or a virtual meeting system for working-level talks.”

With the latest agreement, four hotlines – two operated by the Unification Ministry and two operated by the Defense Ministry – have been restored, but other communication channels like the one connecting the two leaders directly seem to have not yet been fully restored.

Park said that if working-level talks start, a wide range of topics from summit talks to COVID-19 aid could be discussed, but made it clear that no discussions have been made on the issues in the exchanges for the hotline restoration.

COVID-19 is still a key factor in resuming inter-Korean talks. According to Cheong Wa Dae sources, the North is highly cautious about making in-person contacts amid its prolonged border shutdown.

In April, the Unification Ministry completed a virtual conference system for inter-Korean talks, with 400 million won ($345,000) being injected to install two 98-inch giant screens and other communications equipment.

Because the two Koreas have already maintained an exclusive internet network for direct communications, officials predicted no technical issues in holding a virtual meeting with the North anytime soon.