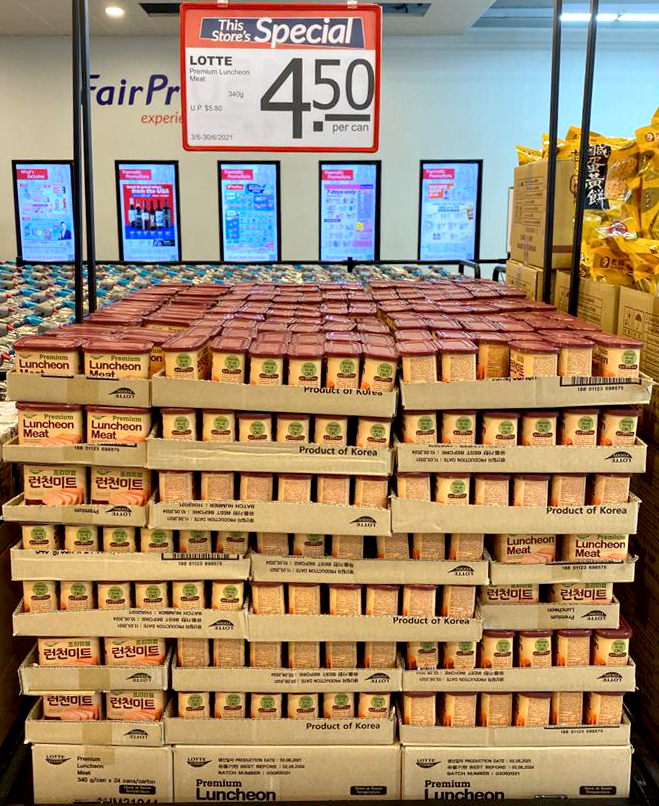 Lotte Foods’ flagship canned ham Luncheon Meat is on the shelves of NTUC Mart in Singapore. (Lotte Foods)
South Korean food company Lotte Foods is expanding the exports of its canned ham products with a goal of doubling the profit from ham exports this year, the company said Tuesday.

Lotte Foods said it achieved $9.4 million from exporting a total of 1,111 tons of canned ham in 2020 -- accounting for almost half of the country’s total ham exports at 2,249 tons in the year.

As of June this year, the company had exported 921 tons of its canned ham products, accounting for 51 percent of the country’s exports of 1,790 tons, Lotte Foods said, citing data from the Korea Customs Service.

For this year, Lotte Foods said it aims to achieve 10 billion won ($8.68 million) in overseas sales from the canned processed meat products.

The growth in the firm’s overseas sales led the country into the black for its canned ham exports in the first half of this year for the first time since 2000, with the trade surplus reaching $2.65 million, the company said.

Introducing the first square-shaped canned ham in the country in 1983, Lotte Food said it started to work on its canned ham sales in overseas markets more actively from the end of 2019.

Lotte Foods said it currently exports its canned ham products, which includes the flagship Luncheon Meat, to Singapore, Taiwan, Hong Kong, Malaysia, the Philippines, Australia, Chile and Mexico. The company plans to expand the number of countries to include Indonesia, Thailand, Mongolia, Japan and Russia, the company added.

“We will introduce more products that fit with the export countries to pioneer new roads for Korean canned ham and expand exports.”