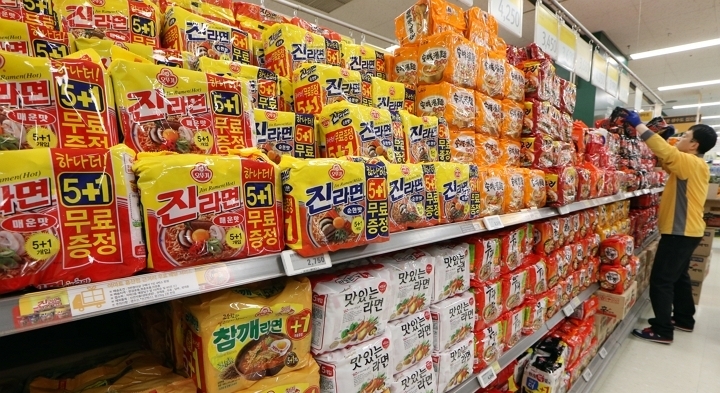 Instant noodles are displayed at a supermarket in Seoul. (Yonhap)
South Korean food manufacturing company Ottogi announced on Friday it will raise its instant ramen prices by an average of 11.9 percent from next month.

The company cited rises in ingredient prices, including flour and palm oil, as well as the increasing labor costs as reasons behind the decision.

The decision to hike the ramen prices comes more than 13 years after the company‘s last price rise back in April 2008.

In February, the company was forced to withdraw its decision to raise the price of Jin Ramen following backlash.

With Ottogi taking the initiative, other instant noodle manufacturers are expected to follow suit.

Nongshim, the country’s largest instant noodle maker and Samyang Foods have not announced price increases since 2016 and 2017, respectively.

Han Yoo-jung from Daishin Securities said Ottogi’s move to raise ramen prices marks a shift in strategy in the ramen market and it could lead to a “meaningful rise in corporate value.”