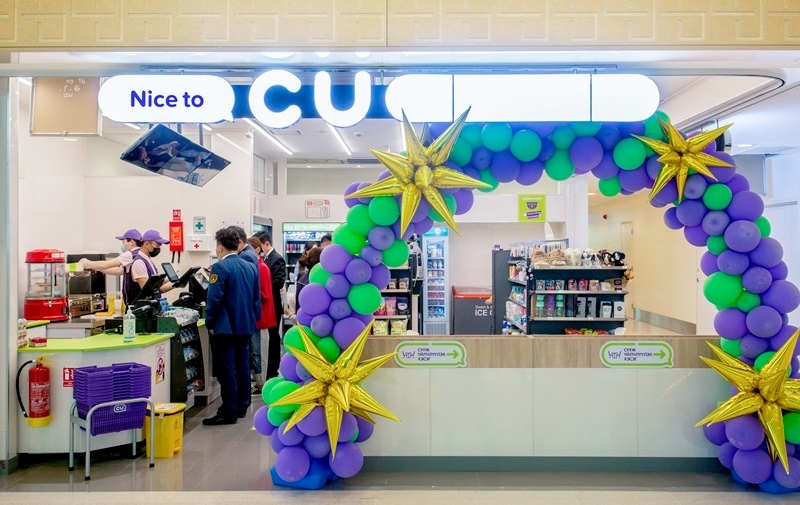 This photo, provided by CU on Thursday, shows one of its two stores that have opened in the New Ulaanbaatar International Airport. (CU)
South Korea's major convenience store chain CU said Thursday it has launched two stores in a new international airport in Mongolia as part of efforts to boost its presence in the country.

CU said the company has become the first South Korean convenience store chain that has established outlets in the New Ulaanbaatar International Airport.

The sole international airport in Mongolia, which opened on July 1 and is also known as Chinggis Khaan International Airport, is about 50 kilometers from the Mongolian capital and has a daily passenger capacity of around 12,000.

The opening of the two outlets in the airport came four years after CU made forays into the Mongolian market through a franchise deal with local retailer Central Express.

One store in the departure lounge caters to travelers and offers instant noodles, snacks, beverages, instant coffee and instant prepared foods, with the other outlet available only to airport staff, CU said.

CU currently operates 130 stores in Mongolia after launching its first outlet in Ulaanbaatar in August 2018.

Mongolia is seen as a promising market for South Korean convenience store operators, with the number of people aged under 35 accounting for more than 60 percent of the total population.

South Korea's convenience store chain operators have been setting their sights on the overseas market as the domestic market has become increasingly saturated. (Yonhap)