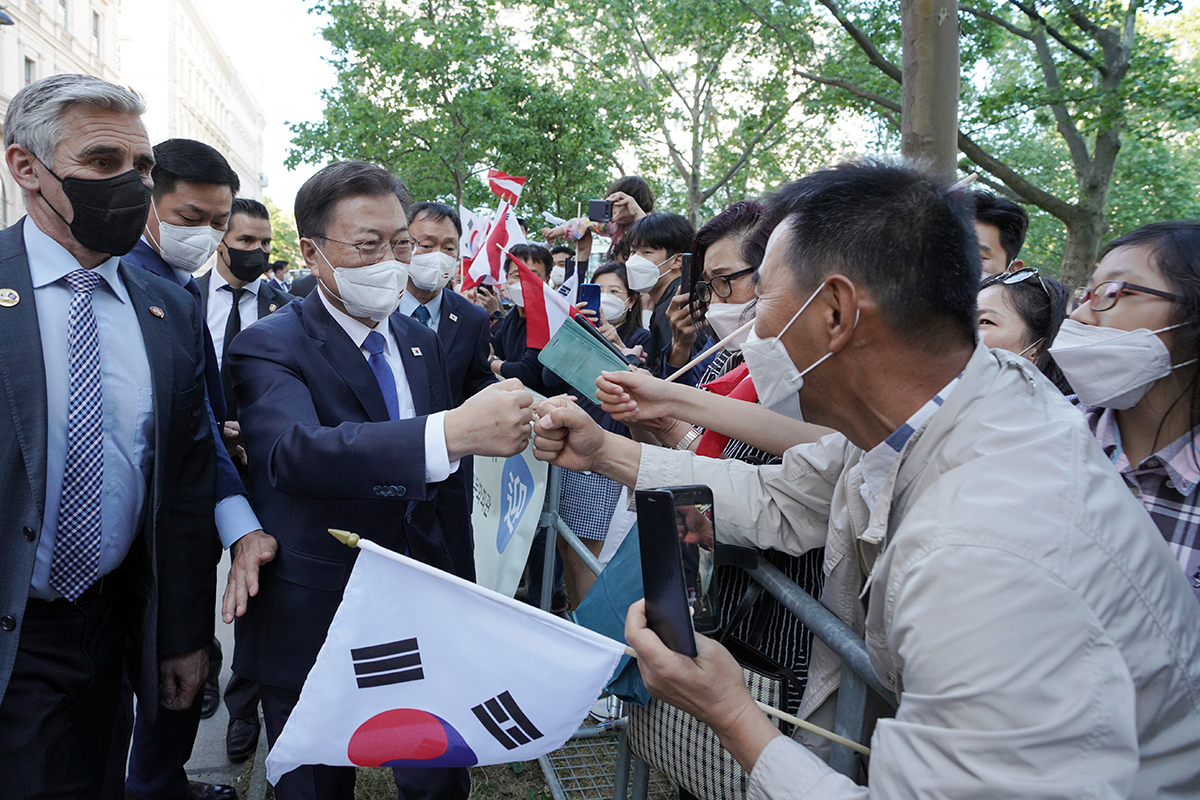 President Moon Jae-in gives a fist bump to a Korean resident in Austria upon his arrival in Vienna on Sunday. (Cheong Wa Dae)
VIENNA/SEOUL -- President Moon Jae-in and his Austrian counterpart, Alexander Van der Bellen, held a summit Monday to bolster ties as the 130th anniversary of bilateral relationship approaches next year.

Moon, coming from the UK after attending the G-7 meeting over the weekend, arrived in Vienna on Sunday. He is the first Korean president to make a state visit to Austria since the two nations established ties in 1892.

With the latest visit, the two nations agreed to elevate the relationship to
a more upgraded "strategic partnership," according to Cheong Wa Dae.

The two leaders discussed extending partnerships in diverse areas as they exchanged views on issues of mutual concern ranging from climate change to the peace process on the Korean Peninsula.

They agreed to bolster economic exchanges, touting the strong growth in the trade volume between the two nations over the past years. Despite the COVID-19 pandemic, the trade volume increased to $2.69 billion last year, up 11 percent compared with a year prior.

As for climate change, the leaders pledged to work together closely to realize their shared goal of carbon neutrality. Moon also expressed gratitude to Austria for joining the virtual P4G climate summit in Seoul last month.

The leaders vowed joint efforts to achieve peace and stability on the Korean Peninsula. Moon briefed Van der Bellen on the South Korean government’s peace-keeping efforts in the region and the Austrian president pledged his full support.

Moon, in particular, praised Austria as one of the leading nations in promoting disarmament and arms control.

Under the upgraded strategic partnership, the two nations plan to promote  more active business and cultural exchanges, including joint projects on the occasion of the 130th anniversary of the ties next year.