[ The Korea Herald – Send E-mail ]
[Herald Interview] How banking giants can survive the disruption of digitalization
Banking leaders need to ditch top-down approach, be ready for speedy decision to solve multifaceted conflicts
By Son Ji-hyoung
Published : May 6, 2021 - 18:01
Updated : May 6, 2021 - 18:06 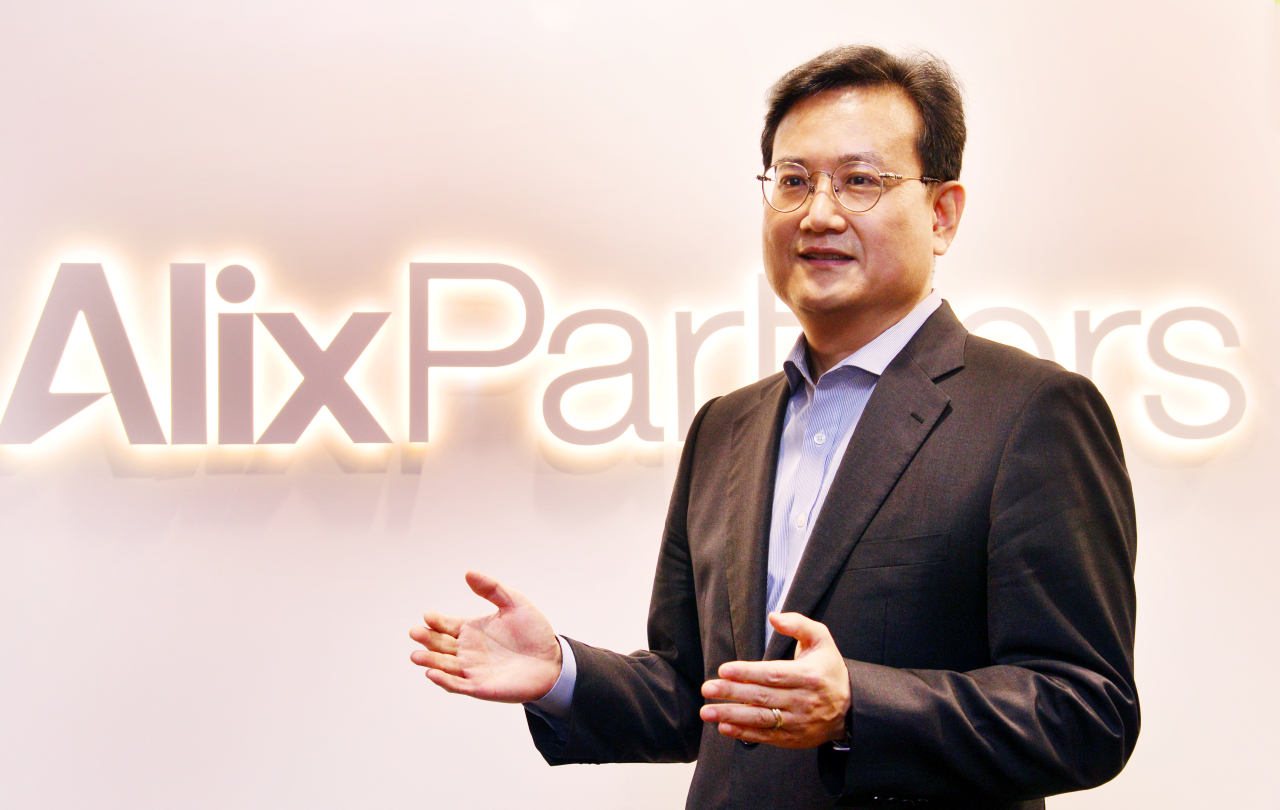 AlixPartners Director Kim Joo-wan speaks in an interview with The Korea Herald (Park Hyun-koo/The Korea Herald)
Technology disruption is already playing out among the commercial banking sector in South Korea, triggering a massive transformation of their services to fend off fast-rising online-only banks launched by internet companies with no banking experience.

The legacy players are tasked with increasing online presence in the market, in part by moving to establish their own respective online-only lending arms for retail customers. But such investments should be made not just to keep their market leadership by jumping onto the digital transformation bandwagon, but to achieve a certain goal, such as cost-efficiency, a local expert said.

“Digital innovation is a means to an end, not an end in itself. Leaders must understand what ends they want to achieve,” said Kim Joo-wan, director at US consulting firm AlixPartners.

”Digital transformation must come with a purpose. An end to it? Automated work process to save time and cut costs of manual efforts, improved customer experiences, an increase of revenue with a wider online product distribution channel or a foray into a new realm of business.”

The Seoul-based consultant said that a headache to banking group leaders is not so much the new technology itself, but the changing expectations of customers who already have had a taste of the new technologies. Tech-savvy domestic customers here are increasingly influenced by instant messaging services, search engines, door-to-door delivery services and one-click e-commerce platforms, among many others.

“So you want that level of convenience in other fields of customer service,” said Kim, who was formerly a veteran consultant at McKinsey & Co. and a senior executive at Samsung Electronics.

The view comes as the disruptive force has taken a toll on the banking industry at home and abroad. According to a report titled “2021 Disruption Index” by AlixPartners, businesses in the financial services sector, among eight industries, were most likely to identify themselves as “worse off” in 2020 than a year before.

Each of its subsectors -- banking, insurance, payments, fintech, asset management, private equity and market infrastructure -- were identified as highly disrupted with that situation expected to worsen, the report also showed.

The same disruptive trend is being observed in Korea.

The market, largely dominated by four giants -- KB, Shinhan, Hana and Woori -- has been facing a rapidly changing landscape as disruptive forces emerge, such as online-only banks Kakao Bank and K bank. Citigroup’s decision to pull its brick-and-mortar retail banking business out of Korea also resonated with the banking sector.

The new players thought to be behind in the race by traditional banks are narrowing the gap at hyper speed. In this new era, speed is far more important than the scale of operation.

“What a disruptor does is to proactively digest the needs of the customers and find itself ahead of a race to win their minds,” he said. 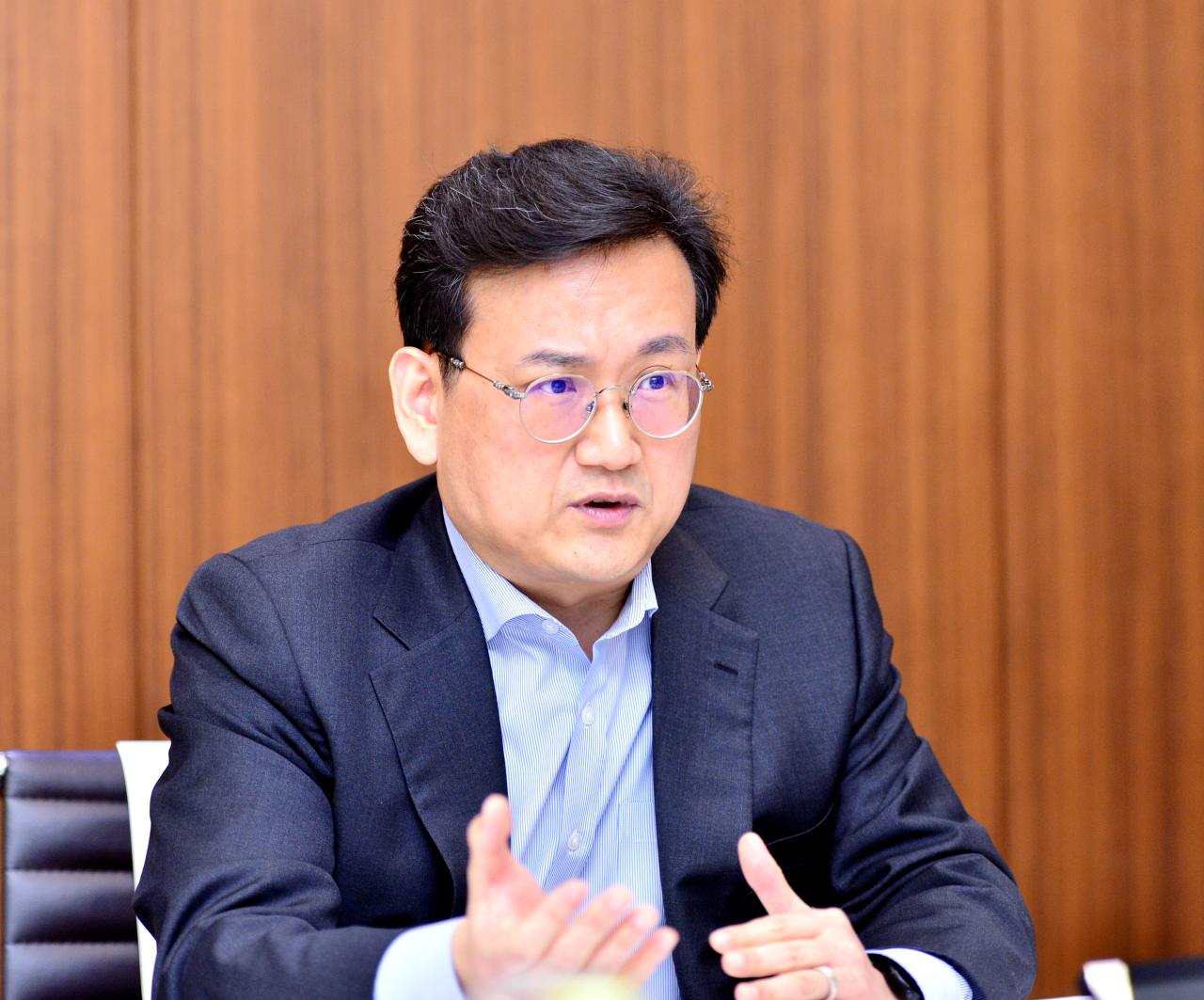 AlixPartners Director Kim Joo-wan speaks in an interview with The Korea Herald (Park Hyun-koo/The Korea Herald)
The digital transformation with purpose, however, appears to be a tall order to legacy players, as they face various constraints from the inside.

Given the highly regulated nature of the financial services sector, persuading employees to change the way they work to nurture an adaptive and agile work environment is never an easy option. Even the task of automating a service could make a risk management department’s job much harder.

Who can manage to force its employees to change? Few can, said Kim, who has experience consulting for clients dedicated to financial services here.

“When we talk about the talent gap, we do not necessarily mean to say that the whole industry is suffering a shortage of tech-savvy software developers,” he said. “We mean to say that we need a leader to overcome the multifaceted conflict.”

Despite challenges, finding a right agent of change is the only shortcut to achieve digital transformation with purpose, Kim said, on the premise that the banking group leaders’ bold show of endorsement comes with that.

The correct fit could be a technology expert who is keen on end-user experience and capable of strategic thinking, or a consultant who can play an interim role in the company.

“Financial groups are capable of learning fast about the technology itself, but what they can’t learn is an outsider viewpoint,” Kim said. “Once the group secures an agent of change, its leader must show a commitment to the agent. Without a commitment, the agent will wither.”

He also called for banking group executives to ditch their top-down approach. The new era -- a combination of digital disruption and slower growth of the economy -- has signaled the end of the “winning formula” that routine banking group executives honed decades ago. Executives often played the role of a crusader for problem solving, coming up with the solutions and executing them in a top-down manner.

Those that survive the wave of disruption will be organizations that know the life cycle of an idea is becoming shorter, that are capable of brainstorming, developing and operating a service at the same time, and that are agile enough to collaborate with teams of different functions.

“An evolution occurs from a disruptive force,” Kim said. “Such an environment gives birth to a mutant, and the mutant becomes the only survivor.”