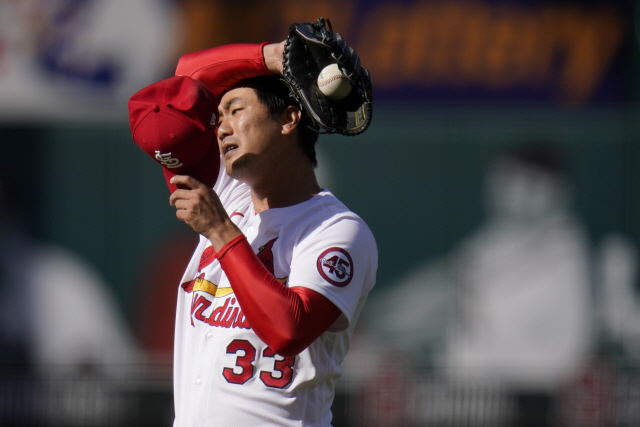 In this Associated Press photo, Kim Kwang-hyun of the St. Louis Cardinals pauses on the mound in the top of the third inning of a Major League Baseball regular season game against the New York Mets at Busch Stadium in St. Louis on Wednesday. (AP-Yonhap)
Kim Kwang-hyun has been a professional pitcher since 2007. He has seen a lot over his career, which began in his native South Korea and has taken him to the majors with the St. Louis Cardinals.

So a bizarre fourth inning against the New York Mets at Busch Stadium in St. Louis on Wednesday (local time), an extended frame that included multiple delays and two reviews, did little to faze him.

Kim walked away with a no-decision after holding the Mets to a run in four innings on two hits and three walks. Kim was lifted for pinch hitter Matt Carpenter in the bottom fourth with the Cardinals nursing a 2-1 lead, and they went on to win 4-1.

In the top fourth, Kim loaded the bases with a single and two walks -- one more free pass than the total from his three previous starts combined. Along the way, umpires had to stop the proceedings to discuss whether an earlier visit by Kim's interpreter, Craig Choi, constituted an official mound visit.

If it had been ruled so, then a later visit by pitching coach Mike Maddux would have been the second mound trip by the Cardinals in that same inning. Kim would then have had to be pulled.

Kim was allowed to stay on, but more delays awaited him. First, it was his catcher Andrew Knizner, who got hit by a foul tip and had to be checked by a team trainer. Then the umpires had a video review on a play by St. Louis third baseman Nolan Arenado, who fielded a grounder and stepped on the bag simultaneously to get the force out at third in a bases-loaded jam. The initial safe call was overturned.

"I kept telling myself, 'I have to stay focused,'" Kim said in his postgame Zoom session with the media about the fourth inning.

"I've been in situations where the game stopped in the middle of an inning because of rains and where there were multiple replay reviews. So I tried not to think too much about what was going on."

The 32-year-old, who threw 30 pitches in the fourth, did have a few more thoughts on his mind after he was pinch-hit for by Carpenter in the bottom fourth.

The Cardinals put runners at the corners with no out, but then Knizner struck out. Kim was due up next, but manager Mike Shildt sent in veteran Carpenter instead, trying to extend the 2-1 lead.

Carpenter struck out, and the Cardinals failed to cash in on the opportunity. Kim said he was a little disappointed he didn't get to pitch in the fifth.

"I still had some gas left in my tank at that moment," Kim said. "I think I was lifted because I'd thrown too many pitches in the fourth. I am disappointed I didn't go deeper into the game."

Kim blamed his shaky command in the fourth inning on the glare off the catcher's gear caused by the setting sun. This was the first game of a doubleheader and thus had the unusual starting time of 4:15 p.m. local time.

One blessing in disguise for Kim in that protracted inning was that, while the game was on hold, the sun set behind him and the glare was gone. He struck out his final two batters.

Asked whether he should have made his case to stay in the game longer, Kim said, "The manager has the right to make pitching changes. If I think those decisions are made in the best interest of the team, then I'll have to accept them. I'll try to be more efficient with my pitch count in future outings." (Yonhap)