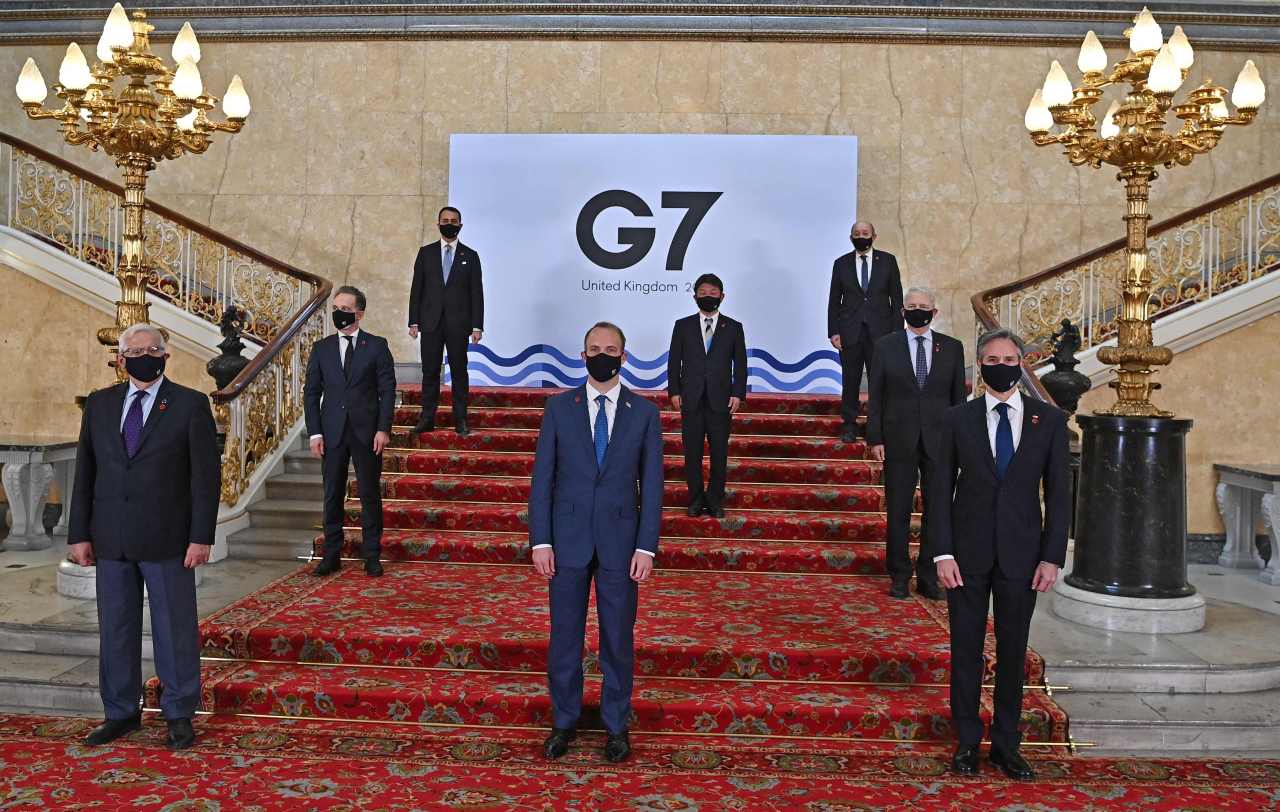 This AFP photo shows the top diplomats of the G7 countries, including US Secretary of State Antony Blinken (front row, R), posing for a group photo during their meeting in London on Tuesday, together with Joseph Borrell, high representative of the European Union for foreign affairs and security policy (front row, L). (AFP-Yonhap)
The top diplomats of the Group of Seven (G7) countries on Wednesday urged North Korea to return to talks on ending its nuclear programs, while also urging Pyongyang to engage in inter-Korean dialogue.

The foreign ministers also expressed their support for US efforts to denuclearize the Korean Peninsula diplomatically.

"We call on the DPRK to refrain from provocative actions and to engage in a diplomatic process with the explicit goal of denuclearization. We remain committed to the goal of complete, verifiable and irreversible abandonment of all of the DPRK's unlawful weapons of mass destruction and ballistic missile programs in accordance with relevant UN Security Council resolutions," they said in a joint statement, issued at the end of the G7 Foreign and Development Ministers' meeting in London.

DPRK stands for the Democratic People's Republic of Korea, the North's official name.

"We welcome the readiness of the United States to continue its efforts in that regard and we remain committed to providing support," said the joint communique.

The London meeting involved the top diplomats of G7 countries, including US Secretary of State Antony Blinken, as well as those of South Korea, India, Australia and Brunei, who took part by invitation.

The meeting came after the US said on Friday that its comprehensive North Korea policy review had concluded and that its new approach toward the North will pursue "calibrated and practical" ways to make progress toward the complete denuclearization of the Korean Peninsula.

To that end, the G7 ministers underscored the need to fully implement UN Security Council resolutions on North Korea.

"It is critical that sanctions which target the DPRK's unlawful weapons development remain in place while its programs exist," they said. "We regret that the DPRK has not taken concrete, verified actions towards denuclearization, and urge the DPRK to comply with all of its international obligations."

They also expressed their support for an early resumption of inter-Korean dialogue.

"We support the peaceful resolution of tensions on the Korean Peninsula and call on the DPRK to resume inter-Korean dialogue."

North Korea has boycotted any serious dialogue with South Korea and the United States since Kim Jong-un's meeting with former US President Donald Trump in Hanoi ended without a deal in February 2019.

The new Joe Biden administration has said it had reached out to North Korea for dialogue since mid-February but that Pyongyang remained unresponsive.

"We remain gravely concerned about the documented accounts of human rights violations and abuses in the Democratic People's Republic of Korea, including in the regime's extensive network of political prison camps," they said, while calling on the North to allow access by a UN special rapporteur.

They also expressed concerns over dire human rights conditions in North Korea, insisting such conditions have been created by the North's choice for weapons over the well-being of its own people.

"Following the closure of the DPRK's borders, and in light of the lack of information about conditions in the country, we are deeply concerned about the welfare of vulnerable communities, in particular their access to adequate nutrition, clean water, and medical facilities," said the statement.

"We remain deeply preoccupied by the precarious humanitarian situation in the country, which is the result of the DPRK regime's choice to prioritize its unlawful WMD and ballistic missile programs over the welfare of its own people." (Yonhap)