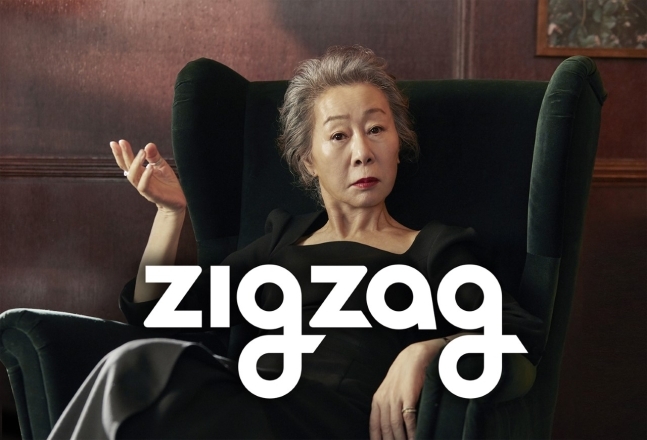 Youn Yuh-jung in Zigzag promotional poster (Zigzag)
Zigzag, a fashion e-commerce platform that mainly targets customers in their 20s and early 30s, has recently hired Oscar winner Youn Yuh-jung, who is 73 years old, as a model.

In Zigzag’s advertisement revealed online, Youn asks, “There are a lot of people who are younger and prettier, but then, I got the role (for the advertisement). Did you guys make a mistake?”

The hire came as a “fresh” idea, attempting to break the norm that young figures are hired as models to attract young customers.

Youn’s predecessor was Han Ye-seul, a popular actress in her late 30s and a fashion icon. For choosing Youn and her wide age gap with the target customer group, Zigzag said it viewed Youn as the right person to deliver their message to the “MZ generation” -- millennials and Generation Z, together encompassing those born from the 1980s into the 2010s -- that it is OK to break away from what others think and pursue their own tastes in fashion.

“Why would you care what other people think about how you dress? Dress by your style, it is not against the law,” Youn says in the video released on Zigzag’s YouTube channel.

“Buy whatever you want,” she adds. As the Korean word for “buy” has a dual meaning, it can also be interpreted as “live however you want” in Korean.

As of Wednesday, one of the two main advertisement videos starring Youn had gained 2.81 million views and over 4,200 likes, since it was posted on April 16.

When combined with other promotional videos with Youn that Zigzag revealed in the past weeks, the total amounts to over 5.2 million views. Yoon’s recent win at the Oscars for best supporting actress appears to have boosted the popularity of the videos.

Oriental Brewery, the country’s largest brewer, has also tapped Youn as the new brand ambassador for its flagship beer brand Cass, for her “frank,” and “straightforward” personality, the company said.

The Cass brand recently underwent a renewal, changing its bottles from brown glass to more transparent. For the All New Cass, the company viewed Youn as an appropriate figure to promote their flagship beer that sets simplicity and transparency at the core of its brand identity, an OB official explained.

“Youn is a character who is not afraid to speak her mind, and we thought it matches well with the brand identity of Cass in transparent bottles,” an OB official said, adding that they had hired her before her Oscar win.

The latest trend of old music and TV programs gaining popularity among younger generations has also made senior celebrities desirable as brand models among retailers. 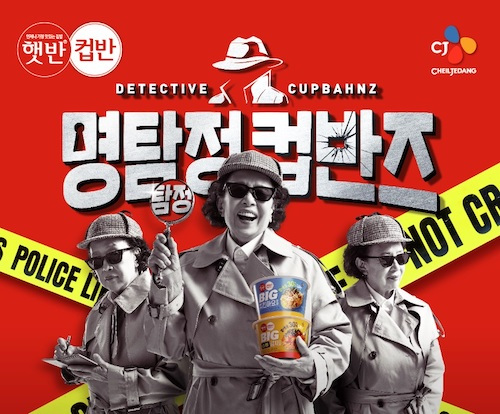 According to CJ, the main groups consuming their Hetbahn Cupbahn products are mostly teenagers and those in their 20s and 30s who want a quick meal.

“Hetbahn is an old brand, so we wanted to rejuvenate the brand image and conducted preference surveys to find that Na was popular among the younger generations,” a CJ official told The Korea Herald. CJ’s Hetbahn was launched in 1996.

Na debuted as a voice actress in 1961 and has appeared in numerous TV shows and movies. Na is gaining popularity among millennials, Generation Z and those even younger, as video clips and screen captures of Na appearing in old drama series and movies are trending, the official said.

Because it is important to add a fun factor to advertisements to attract viewers on social media platforms, the food company created a series of videos on YouTube in which Na appears as a detective who tries to find out who kidnapped a Hetbahn Cupbahn researcher. In the comments, viewers are seen complimenting how “cute” and “adorable” Na is.

“It is the first time for CJ Cheiljedang to come up with such an ad campaign, to make a short content with a story plot of its own to promote a product,” the CJ official said. 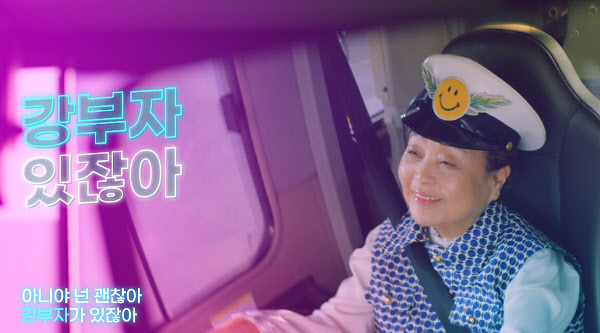 Kang Boo-ja in Leaders Cosmetics promotional poster (Leaders Cosmetics)
Leaders Cosmetics also recently hired Kang Boo-ja, a veteran female actor born in 1941, as its brand model to promote its skin care products that are mostly used by those in their 20s. Before, male actors Lee Seung-gi, 34, and Yang Se-jong, 29, were the faces of the cosmetics company.

Kang dances and raps along with younger models in the advertisement video released by Leaders Cosmetics in February.