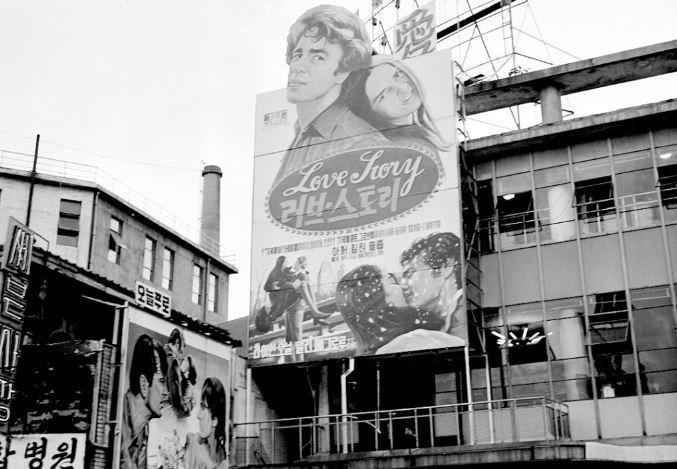 This photo shows the signboard of a movie theater in Seoul in 1971, when the city’s population was growing at a high rate to hover around 6 million, from 2.4 million in 1960. (National Archives of Korea)
SEJONG -- About three decades ago, nearly 1 out of every 4 South Koreans were residing in Seoul. But it has been found that less than 1 in 5 today are Seoulites.

The population of Seoul peaked at 10.969 million in 1992, accounting for 24.6 percent of the entire population of 44.503 million, according to unofficial demographic statistics held by the government.

Data from the Ministry of Interior and Safety showed that the share of residents in Seoul of the population of Korea fell to 18.5 percent, 9.588 million of 51.702 million, in April 2021. This marked the lowest since the nation started compiling the figures.

This also contrasted to 20.3 percent, posted a decade earlier in April 2011 -- 10.3 million of 50.59 million. The capital’s population has seen a steady decline since then. 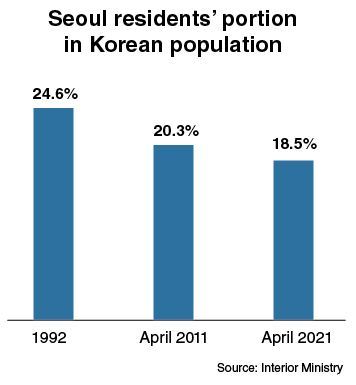 Though the demographic data includes resident-registered foreigners, their proportion is relatively meager in terms of affecting a regional residents’ share in the entire population.

The continuous outflow in the number of residents from the city is mainly attributed to state-led active fostering of new residential towns in satellite cities, such as Goyang, Seongnam, Hanam, Bucheon and Gimpo, since the early 1990s.

In recent years, the skyrocketing apartment prices in Seoul have fanned the outflow, under which more and more Seoulites have moved to Gyeonggi Province and are commuting to the capital.

Seoul has been leading the nationwide population decline for more than a year since late 2019. In April 2021, its population decreased by 9,773 on-month, while the drop for the figure of Korea stood at 3,805.

Despite the desirable drop in Seoul’s population, the government has not been successful in resolving the problem of the densely populated Seoul metropolitan area, which includes Gyeonggi Province and Incheon.

“The population density in some cities of Gyeonggi Province -- for example, Suwon, Goyang and Yongin -- are emerging as a fresh problem,” said a research analyst in Seoul.

While each of the three cities in Gyeonggi Province has more than 1 million residents, the population of Suwon, 1.18 million, surpasses that of Ulsan, one of the nation’s six metropolitan cities, at 1.12 million.

Over the past decade, the populations of Gyeonggi Province and Incheon have climbed by 13.8 percent and 5.9 percent, respectively, to 13.47 million and 2.93 million.

The rising population density is also becoming an issue in Gyeonggi Province’s fourth-largest city, Seongnam, and its fifth-largest city, Hwaseong -- home, respectively, to 932,000 and 864,000 residents. Figures for Bucheon and Namyangju in the province have reached 812,000 and 721,000.

As for Seoul -- despite the rapid population slide -- a noteworthy point is that the city saw the portion of single-person households continue to grow.

Meanwhile, Seoul posted the lowest figure in the sex ratio -- the number of men per 100 women -- as of last month among eight major cities and nine provinces, at 94.6, or 4.66 million males vs. 4.92 million females.