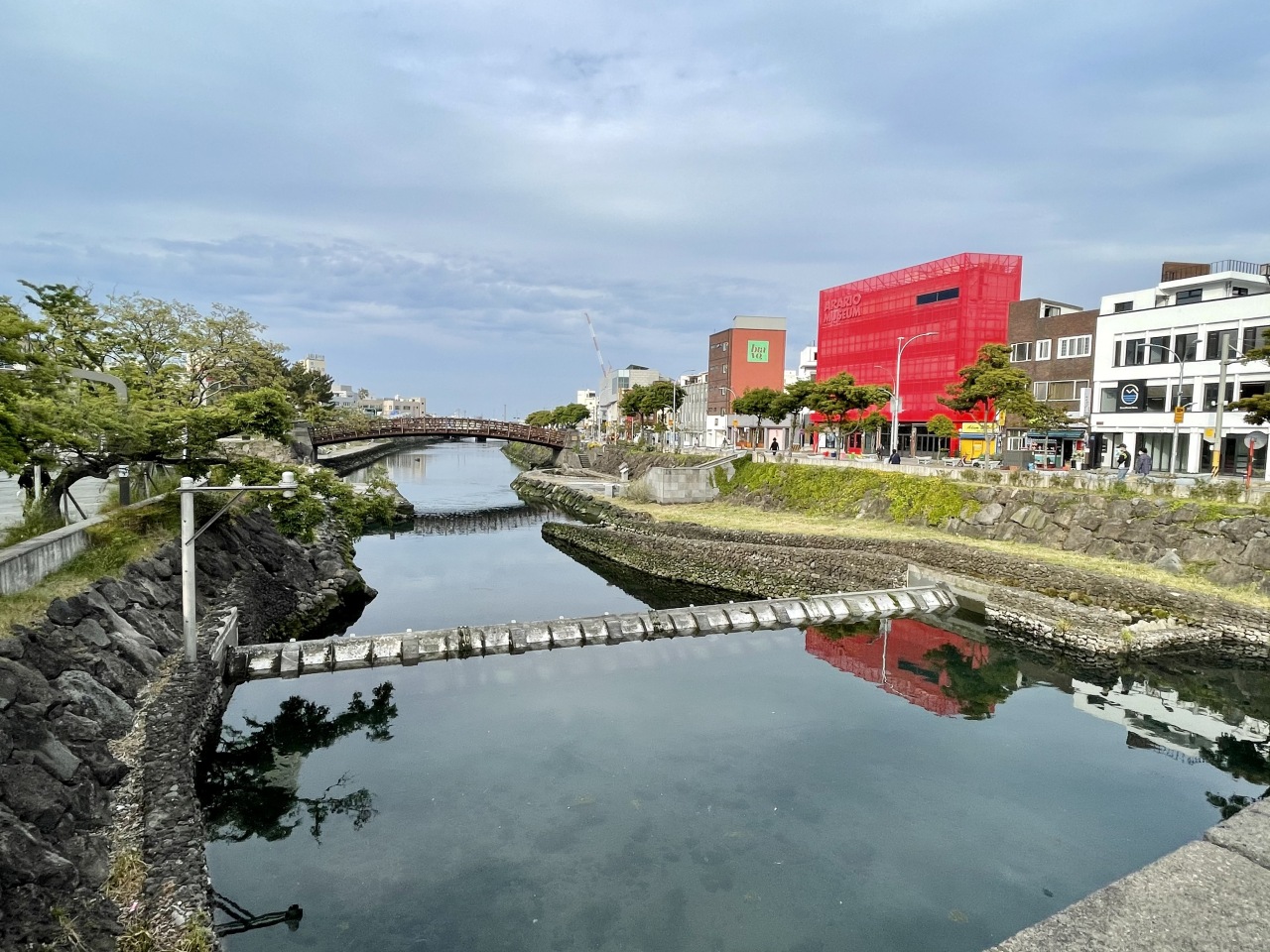 The following is the first article in a three-part series that explores art galleries on Jeju Island. -- Ed.

JEJU CITY, Jeju Island -- An old neighborhood near Jeju International Airport has come into the limelight, attracting young hipsters looking for an artsy experience on an island best known as a holiday destination.

Tapdong, situated near the airport -- the main gateway to the island -- was once a bustling area. Tapdong Plaza, a outdoor entertainment hub for young people, opened in 1991 and cinemas, cafes and fast-food restaurants soon followed.

Over the years, however, the Tapdong area became an outdated, derelict neighborhood, failing to attract travelers seeking scenic views on the island. movie theaters shut down and stores went out of business.

But recently, the area has been receiving more attention, as young people who land on the island are making sure to visit the Tapdong district before anything else.

Driving into the Tapdong area, a red building catches the eye -- the Arario Museum Tapdong Cinema. Run by Arario Group, an influential art gallery business with a number of galleries in Seoul and Cheonan, South Chungcheong Province, the contemporary art museum is housed in a renovated six-story cinema building. 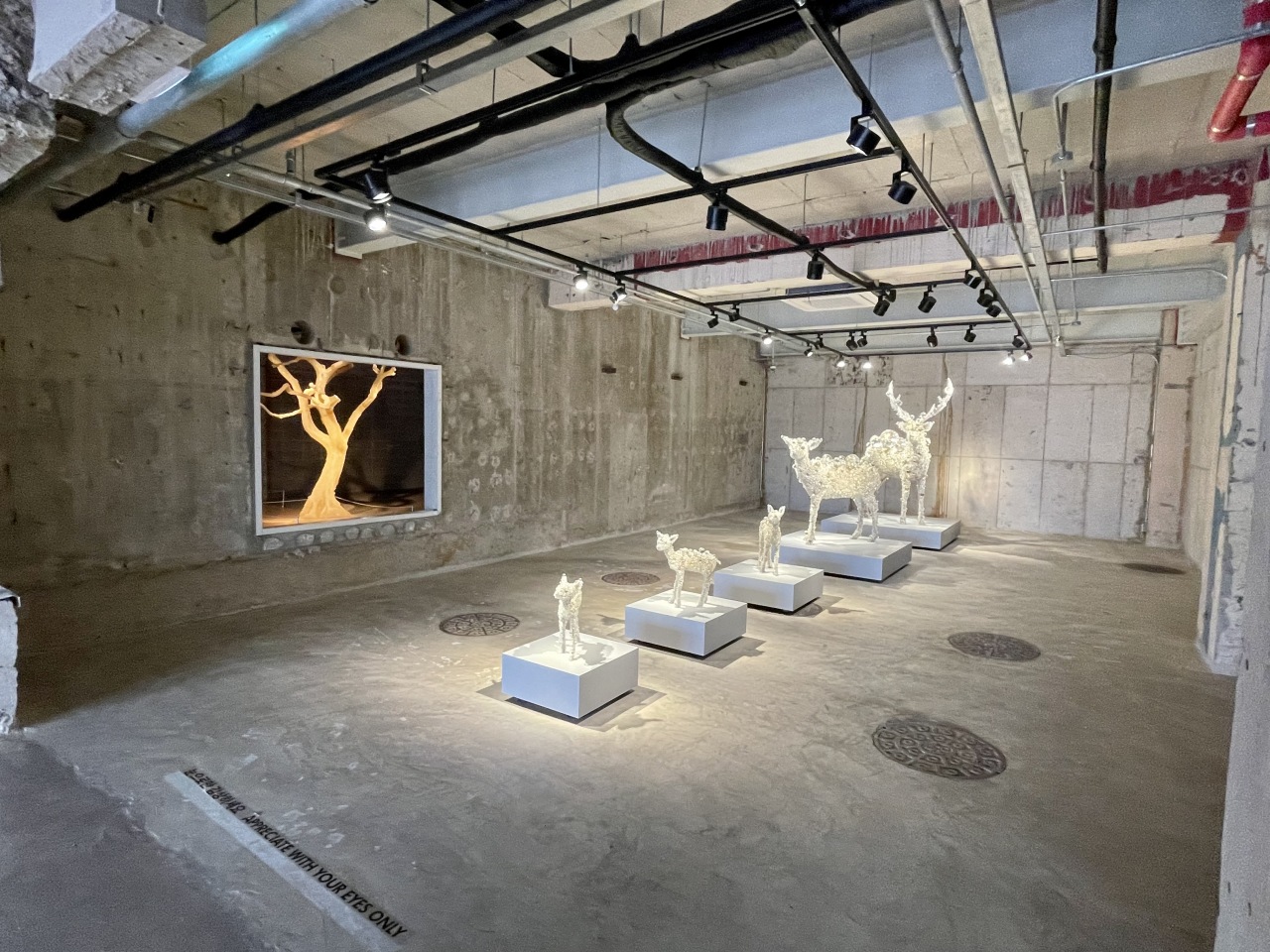 Visitors line up in front of the crystal deer for selfies, as the white installation work is highly “Instagrammable.”

“A large number of young people visit Arario Museum Tapdong Cinema. About 40 percent of the visitors are in their 20s and 30s,” Song Ye-jin, a curator at Arario Museum said. Next to the deer collection is the hip cafe Cream, famous for its Jeju-inspired drinks and desserts, such as a matcha, or green tea, latte, hallabong-ade and more.

Lifestyle select shop D&Department opened in July 2020 across the street from the museum. Run by the D&Department Project design group based in Japan, the store sells design products made by artisans from Jeju Island.

Those who would like to buy something other than the classic tangerine or hallabong chocolate at the airport to take home can take a look at artisanal ceramic tableware crafted with Jeju Island soil or objects made with basalt from Jeju Island. 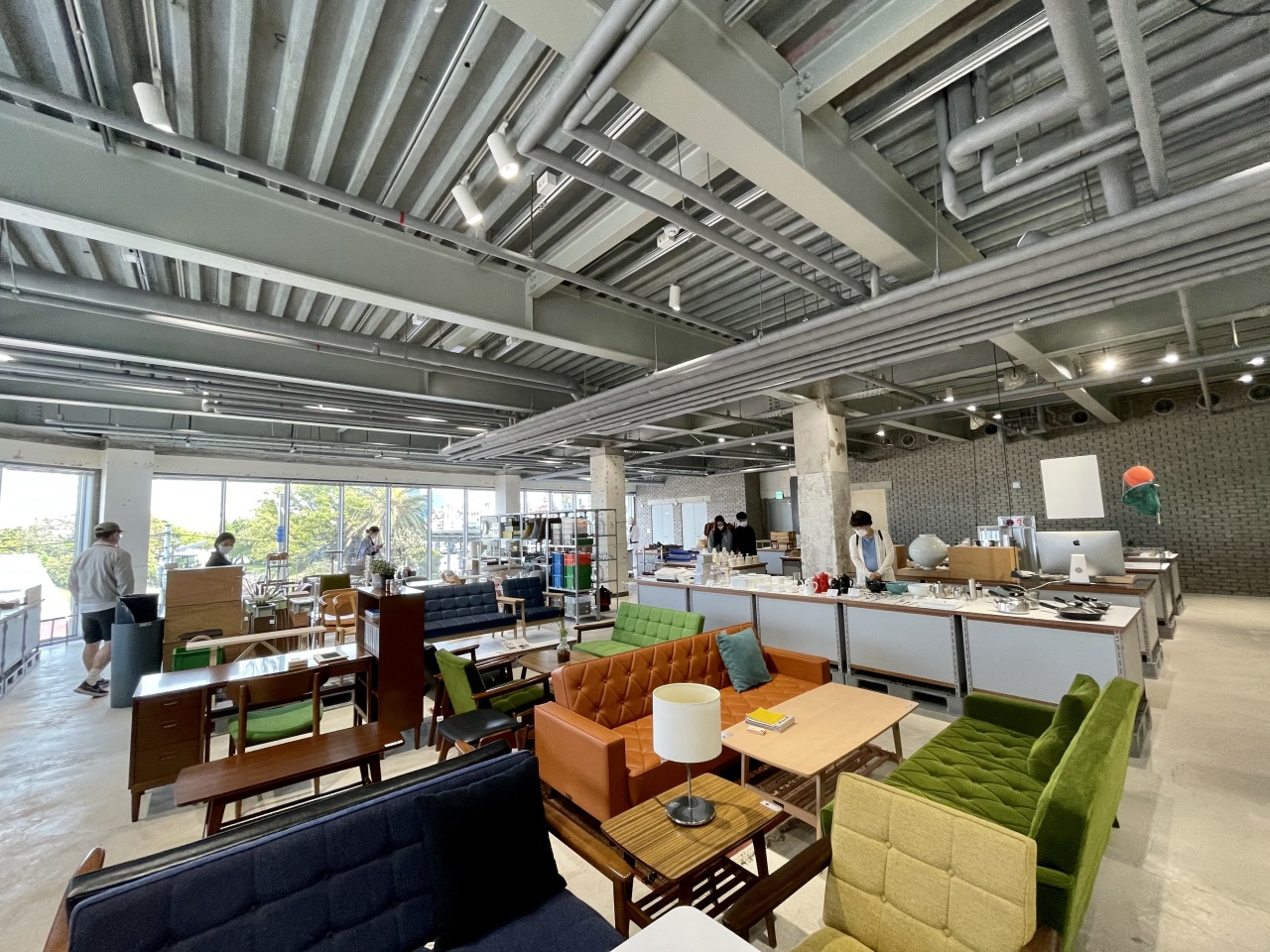 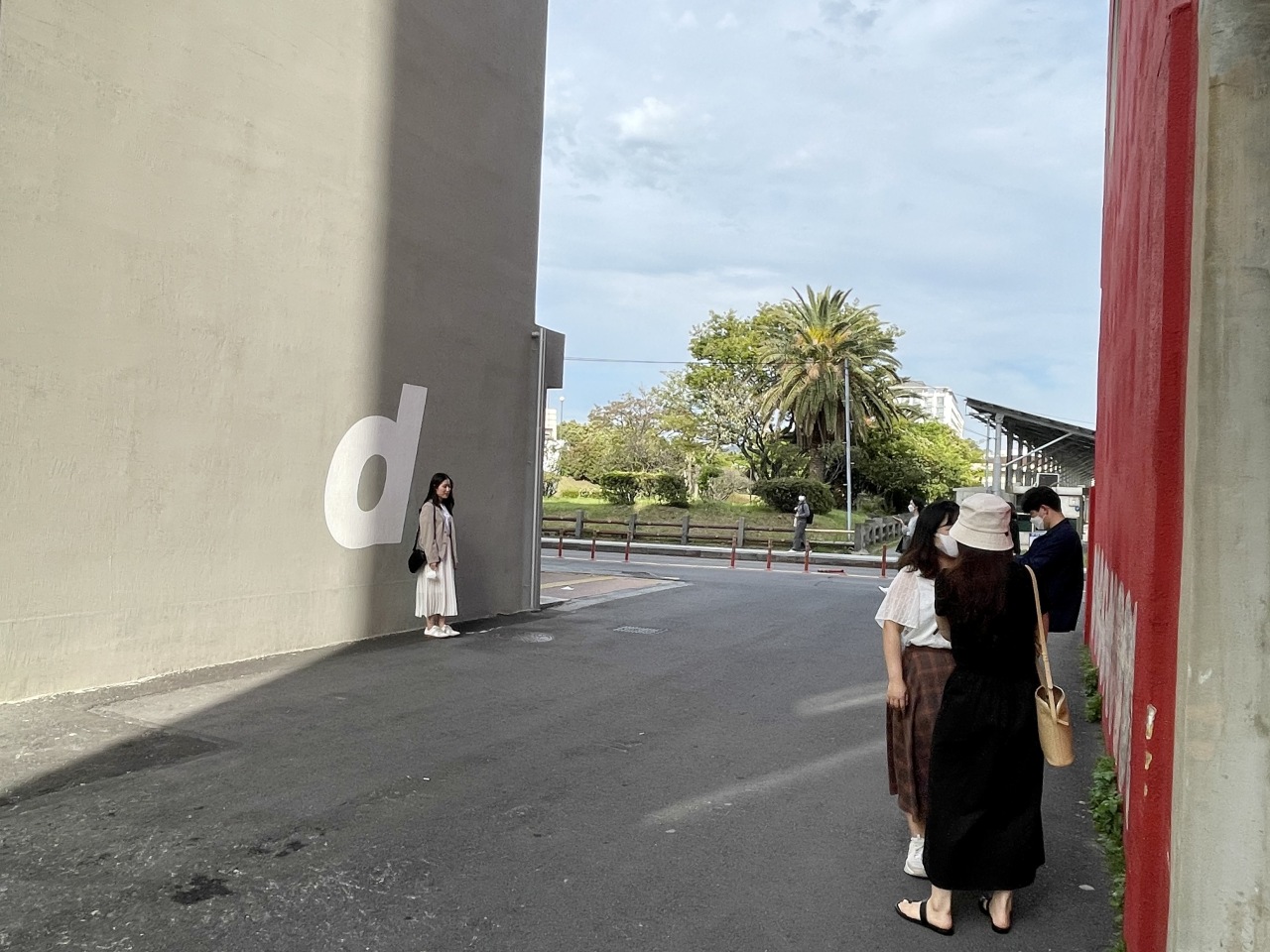 Visitors line up to take a picture in front of the “D” on the D&Department building. (Im Eun-byel / The Korea Herald)
A large white “d” is printed on the building wall and visitors stand in line to take a photo in front of the letter, to show their friends on social media that they have visited the art gallery district.

A five-minute drive from the Arario Museum Tapdong Cinema is the Arario Dongmun Motel, a motel-turned-art gallery. The gallery looks out to Sanjicheon Stream, where residents washed their laundry in the past. One can see the black basalt rock on the river floor. The Dongmun Motel is currently closed due to the COVID-19 pandemic. According to the art gallery, a reopening date has not been set yet due to the prolonged virus situation.

More information on art museums on Jeju Island can be found at the Jeju Tourism Organization site at www.visitjeju.net. 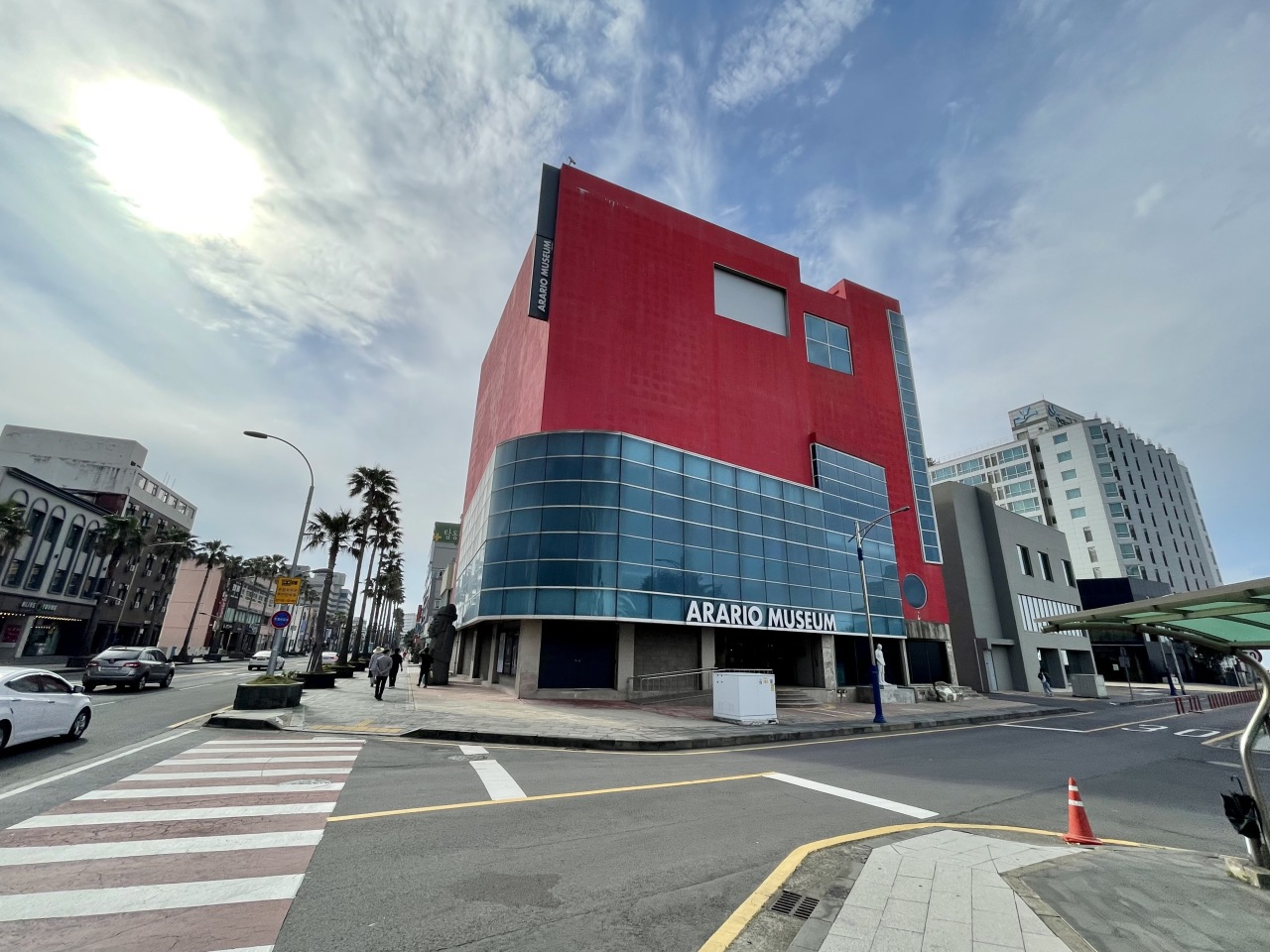