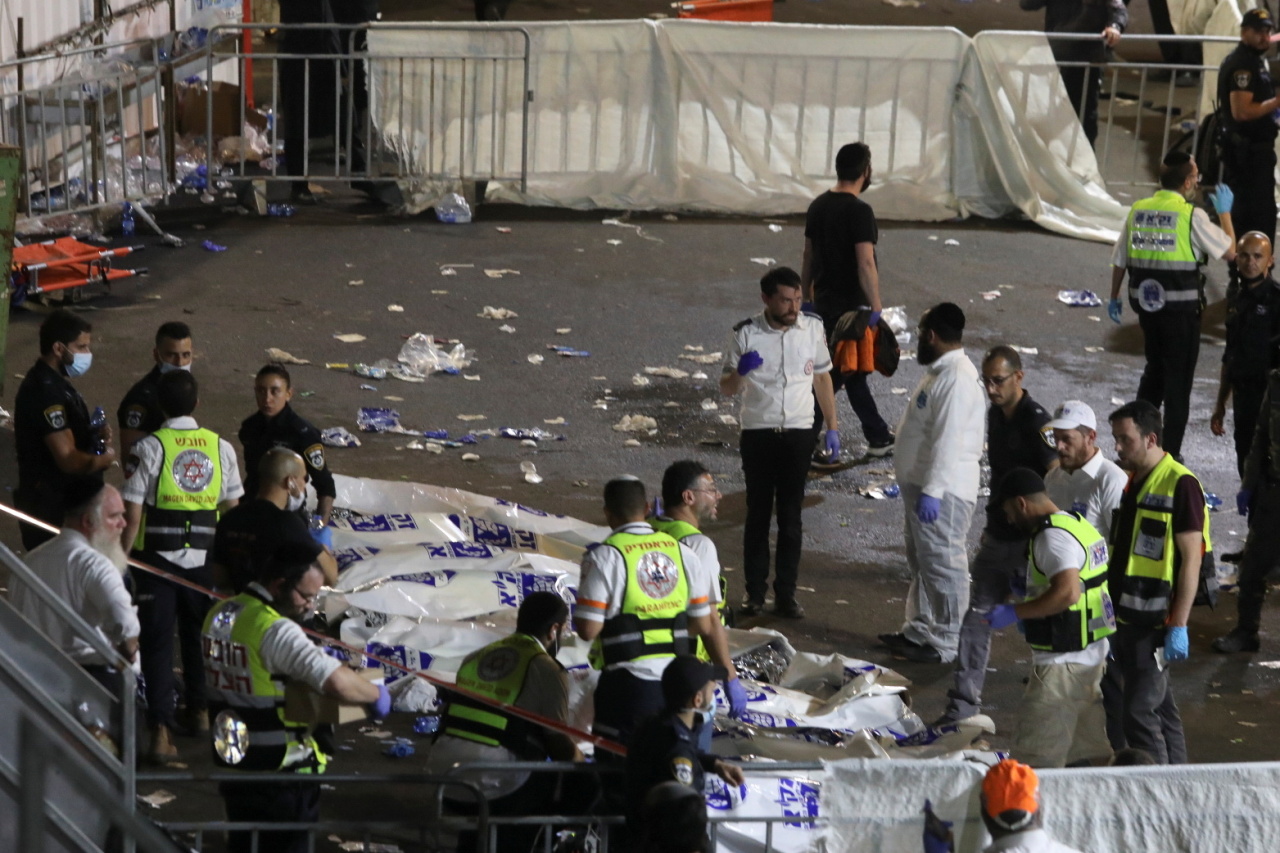 Medics and rescue workers attend to the Lag B'Omer event in Mount Meron, northern Israel, where fatalities were reported among the thousands of ultra-Orthodox Jews gathered at the tomb of a 2nd-century sage for annual commemorations that include all-night prayer and dance, at Mount Meron, Israel Friday. (Reuters-Yonhap)
MERON, Israel  (AFP) -- A massive stampede at a densely packed Jewish pilgrimage site killed at least 44 people in northern Israel on Friday, with rescue workers facing chaotic crowds while trying to evacuate the injured.

The disaster occurred in Meron at the site of the reputed tomb of Rabbi Shimon Bar Yochai, a second-century Talmudic sage, where mainly ultra-Orthodox Jews flock to mark the Lag BaOmer holiday.

Closed last year due to coronavirus restrictions, this year's pilgrimage was expected to be a celebratory event in a nation that has largely re-opened thanks to a successful vaccination effort.

The pilgrimage was largest public gathering since the pandemic began, with reports that there were three times more people there than authorised.

Initial reports indicated that the carnage began when a section of stadium seating collapsed but rescue workers later linked the casualties to a stampede.

A spokesman for the Magen David Adom, Israel's rescue service, told AFP "there were 38 dead at the scene but there were more at the hospital."

A source at the northern Ziv hospital, one of several receiving casualties, told AFP it had recorded at least six deaths.

Israel's Prime Minister Benjamin Netanyahu called it a "heavy disaster" and said he was "praying for the injured".

The army and emergency services deployed helicopters to evacuate the wounded.

Scenes from Meron hours after the accident showed an ultra-Orthodox Jewish crowd in distress, with debris scattered across the ground.

Some survivors had lit candles for the victims while other prayed at a nearby wall.

Israeli media have published an image of a row of bodies covered in plastic bags on the ground. "This is one of the worst tragedies that I have ever experienced," said Lazar Hyman of the United Hatzalah volunteer rescue service, who was at the scene.

"I have not seen anything like this since I entered into the field of emergency medicine," he added.

Yehuda Gottleib, one of the first responders from United Hatzalah, said he saw "dozens of people fall on top of one another during the collapse".

"A large number of them were crushed and lost consciousness."

Opposition leader Yair Lapid lamented the "terrible disaster", and described it as a "sad" night for the country.

Israel has fully vaccinated more than half of its 9.3 million population against the coronavirus, but restrictions on massive public gatherings remain in place to stem the spread of the virus.

Authorities had authorised 10,000 people to gather at the site of the tomb but organisers said more than 650 buses had been chartered from across the country, bringing 30,000 pilgrims to Meron.

Ultra-Orthodox Jews, known in Israel as haredim, have throughout the pandemic shown resistance towards health and safety measures mandated by the government.

Around 5,000 police had been deployed to secure the event.

After the stampede, police closed access to the area to prevent a crowd from building further, while rescue workers and security forces worked to clear the area and identify the victims.

Some of the injured have been transported by military helicopter to Tel Aviv and Jerusalem, rescue workers said.