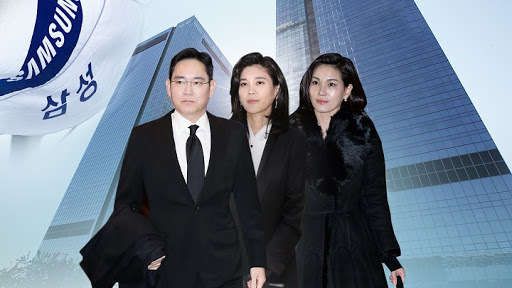 Children of the late Samsung chairman are set to receive massive loans from local lenders to pay more than 12 trillion won ($10.8 billion) in inheritance taxes, the largest-ever amount in the country’s history, according to industry sources on Thursday.

Two domestic commercial banks, which were not identified, will issue credit loans of hundreds of billions of won to the family of the late Samsung Group Chairman Lee Kun-hee, later in the day, they said.

The decisions were made during their high-ranking in-house committees in charge of approving large-scale lending. In general, credit loans approved by these decision-making bodies are not bound by the banks’ existing regulations on credit assessments that apply to ordinary customers, having a flexible interest rate and maximum loan amount.

Lee, who died last year at age 78, was survived by his wife, Hong Ra-hee, only son, Lee Jae-yong, and two daughters -- Lee Boo-jin and Lee Seo-hyun. He left assets amounting to more than 22 trillion won, including stocks estimated at around 19 trillion won.

With their loans as well as stock dividends, Lee’s family members are likely to pay one-sixth of their inheritance taxes, or 2 trillion won, by Friday. The remainder will be paid in six installments over five years.

Market insiders worry that local banks’ issuance of extensive loans for the Samsung family may cause a sense of deprivation among people whose loan requests have been easily deferred by lenders in the wake of the financial authorities’ stricter lending rules to curb rising household debts.

The debt service ratio is the maximum amount in credit loans allowed for individuals compared to their disposable income. Under the rules, high earners whose total annual debt payments surpass 40 percent of their income can‘t receive additional bank loans.

“I’m a bit concerned that ordinary customers would feel frustrated by the news when they can’t borrow even 100 million won from banks under the current regulations,” an industry source said.

Experts highlighted the role of financial authorities, including the FSC and the market watchdog Financial Supervisory Service, in soothing public discontent over commercial banks’ massive lending to significant figures like the Samsung family.

“People wouldn’t express criticism toward local banks for providing massive loans to Samsung heirs if the lenders didn’t give out illegal benefits and the loans were properly used for tax payments. The financial authorities should closely monitor whether commercial banks’ lending procedures meet their standards or legal requirements,” said Ha Joon-kyung, an economics professor at Yonsei University.