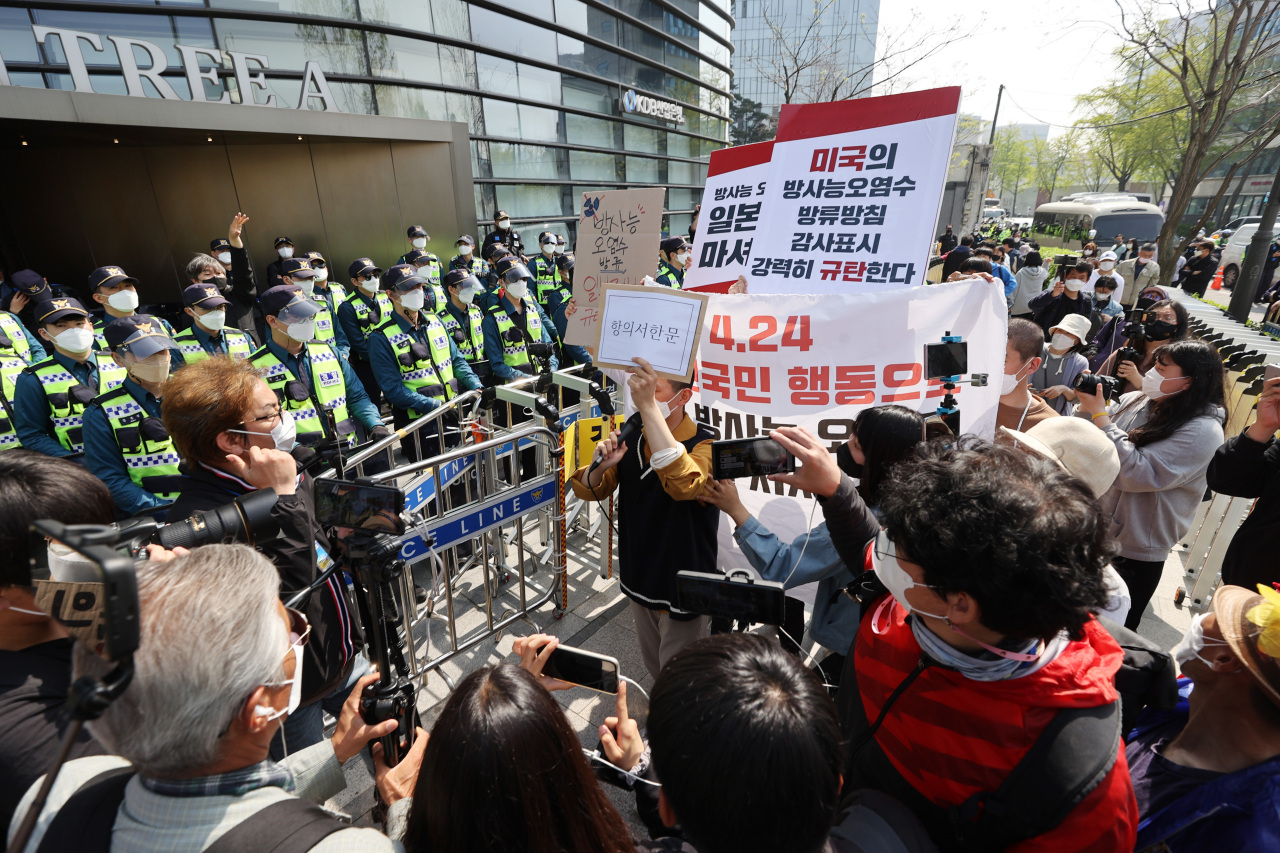 Police block a group of civic activists in front of the Japanese Embassy in Seoul on April 13, as the activists try to convey a letter of protest. Earlier that day the Japanese government announced its decision to dispose of radioactive water from the crippled Fukushima nuclear plant by dumping it into the Pacific Ocean. (Yonhap)
Since the Japanese government announced plans to dispose of radioactive wastewater from the stricken Fukushima nuclear plant by releasing it into the sea, Seoul is scrambling to stop it from happening. At the very least, it wants Tokyo to provide transparent information to the international community.

South Korea, Japan’s closest neighbor, views the discharge of more than 1 million tons of contaminated water as a threat to its people and the surrounding marine environment.

Even though the water will be filtered and diluted, Seoul objects and is weighing its diplomatic and legal options. President Moon Jae-in has ordered his officials to look into filing a complaint against Japan with the International Tribunal for the Law of the Sea.

But analysts here question the effectiveness of legal action and whether it can override Japan’s decision to release the wastewater. Court proceedings should be considered only after all the necessary diplomatic endeavors have been tried, they say, as they could fan the flames of animosity between the two countries at a time when they are already embroiled in various disputes over historical issues.

“Seoul needs to find diplomatic methods first, continue talks with Japan and create a system where South Korea could be part of the monitoring system of the entire release process,” said Jin Chang-soo, director of the Center for Japanese Studies at the Sejong Institute.

“South Korea can’t stop Japan’s planned release. What is possible for Seoul now is to join in with other countries to make sure the discharged water is at a safe level and in line with international standards, and for Japan to provide transparent data and information.”

He added that legal action should be a last resort if Japan is unwilling to cooperate by sharing information and if diplomatic efforts don’t work.

Choi Eun-mi, a Japan expert at the Asan Institute for Policy Studies, expressed a similar stance.

“The most realistic and feasible way now is for Seoul to be part of the International Atomic Energy Agency’s monitoring team for the discharge of the water,” said Choi, adding that changing Japan’s mind on the wastewater disposal would be tough, as Seoul would have the burden of proving that the radioactive water presented a clear danger.

“What’s more important is to check the safety of the water through a scientific verification process, and measure the damage and discuss what kind of compensation could be possible. Tackling the matter emotionally, trying to protest through legal means and public opinion, wouldn’t help resolve the problem.”

On April 13, Japan decided to dump 1.25 million tons of wastewater it has collected since the Fukushima Dai-ichi nuclear plant was crippled by a 2011 earthquake and tsunami. With storage space for the radioactive water expected to run out in the summer of 2022, Japan said its disposal was unavoidable.

Japan plans to start releasing the water two years from now, and the process is expected to take decades. It insists the wastewater will be filtered and diluted to remove all radioactive substances except tritium, which it says is harmless to humans in small doses.

The decision, however, was met with fierce backlash from neighbors including South Korea, China and Russia, as well as from the Japanese fishing industry and environmental activists around the world. Opponents say the sheer volume of water to be released could harm human health, food safety and the maritime environment.

According to the South Korean Foreign Ministry, Seoul will focus on publicizing its concerns through multilateral channels, including the United Nations and the World Health Organization. It will also press Japan to share related data and information, and make sure South Korean experts are included on the IAEA’s monitoring team. Seoul also plans to bring up the matter during diplomatic talks with other countries with Pacific Ocean coastlines.

Last week, South Korea and China held working-level talks on maritime cooperation, with both countries reaffirming their opposition to Japan’s decision without full consultations with neighboring countries. The two sides agreed to work together on follow-up measures depending on Tokyo’s future responses.

But forming such a coalition against Tokyo needs to be done in a careful manner, while considering the bigger picture of geopolitics, experts say.

South Korea-Japan ties have already deteriorated over territorial and wartime history disputes rooted in Japan’s 1910-45 colonial rule of the Korean Peninsula, which have morphed into an economic feud.

“At a time when talks between Seoul and Tokyo are difficult due to deep discord, realistically, it is hard to expect a dramatic turnaround or cooperation over the water issue,” said Asan’s Choi. “Managing the relations to prevent them from plummeting further would be critical.”

The unresolved strain between the two countries could also hamper Washington’s attempts to bolster trilateral cooperation with its two Northeast Asian allies and form a united front against a more assertive China and a nuclear-armed North Korea.

Meanwhile, the US has thrown its weight behind Tokyo’s decision, with US climate envoy John Kerry expressing confidence in the transparency of Japan’s process and its willingness to follow due procedures.

In this regard, Choi stressed that Seoul needs to look at the bigger picture, as it has to consider not only bilateral ties, but also the trilateral relationship and other interests in the region.

A lengthy international tribunal with an uncertain outcome

With Seoul eying legal means to stop the wastewater disposal, experts say filing a lawsuit in an international court should be considered only after careful preparation. Litigation is lengthy, they say, and it is uncertain whether the verdict would be in Seoul’s favor.

“The verdict entirely depends on how prepared South Korea will be. If Seoul wants a ruling that can block the discharge, it requires full-fledged preparations to build the case and provide evidence that Japan has violated the UNCLOS,” said Lee Ki-beom, a professor at Yonsei University Law School, referring to the United Nations Convention for the Law of the Sea.

Those preparations could take months or years if Seoul is to present a winnable case, Lee stressed, adding that it was difficult to predict the results at this point.

If Seoul aims to fight Japan’s decision at an international tribunal, the two parties would have to choose among four alternative procedures to settle the dispute. If the two sides could not agree on one, as seems likely, they would proceed to an arbitral tribunal in accordance with Annex VII of UNCLOS.

After filing a petition, Seoul could in the meantime request “provisional measures” from the ITLOS. This is the equivalent of an interim injunction preventing Japan from taking action until an official decision could be reached. It normally takes months for a case to be heard and years for a final ruling. Lee said in this case, a final ruling could take up to three or four years.

But for the court to order provisional measures, the claimant would have to prove two things, according to Kim Hyun-jung, a political science professor at Yonsei University specializing in international law: that the situation is urgent and that a delayed ruling could cause serious, irreparable harm to the marine environment.

“Proving urgency at this time, when Japan hasn’t released the water yet, would not be easy,” she said. “There is more possibility of demonstrating urgency and obtaining provisional measures when the discharge is impending.”

And at the provisional measures level, suspending the wastewater discharge entirely could be difficult, said professor Lee, adding that the international tribunal might rule only that the two countries “must cooperate and exchange information.”

With the burden of proof on Seoul both at an international tribunal and an Annex VII arbitral tribunal, experts say the most difficult thing to do would be to provide data and scientific evidence showing that the water discharge would have long-term health effects on people and could damage the marine environment.

Some raise concerns that the viable evidence of the damage and its impact would not be available until years after Japan discharges the water and it would be already too late by then.

“The impact from marine pollution will happen over the long term, and the causality is often difficult to pinpoint in many environmental pollution cases because it is hard to confirm the amount damage,” said Kim.

But she also suggested the latest emphasis on “precautionary principle” in environmental lawsuits, where preventive actions could be ordered, even in the absence of complete scientific data identifying risk, if a certain activity may have a strong suspected risk of harm to the environment.

“Therefore, what’s most pressing now is to request Japan for exchange of information, as well as scientific data from the IAEA.”