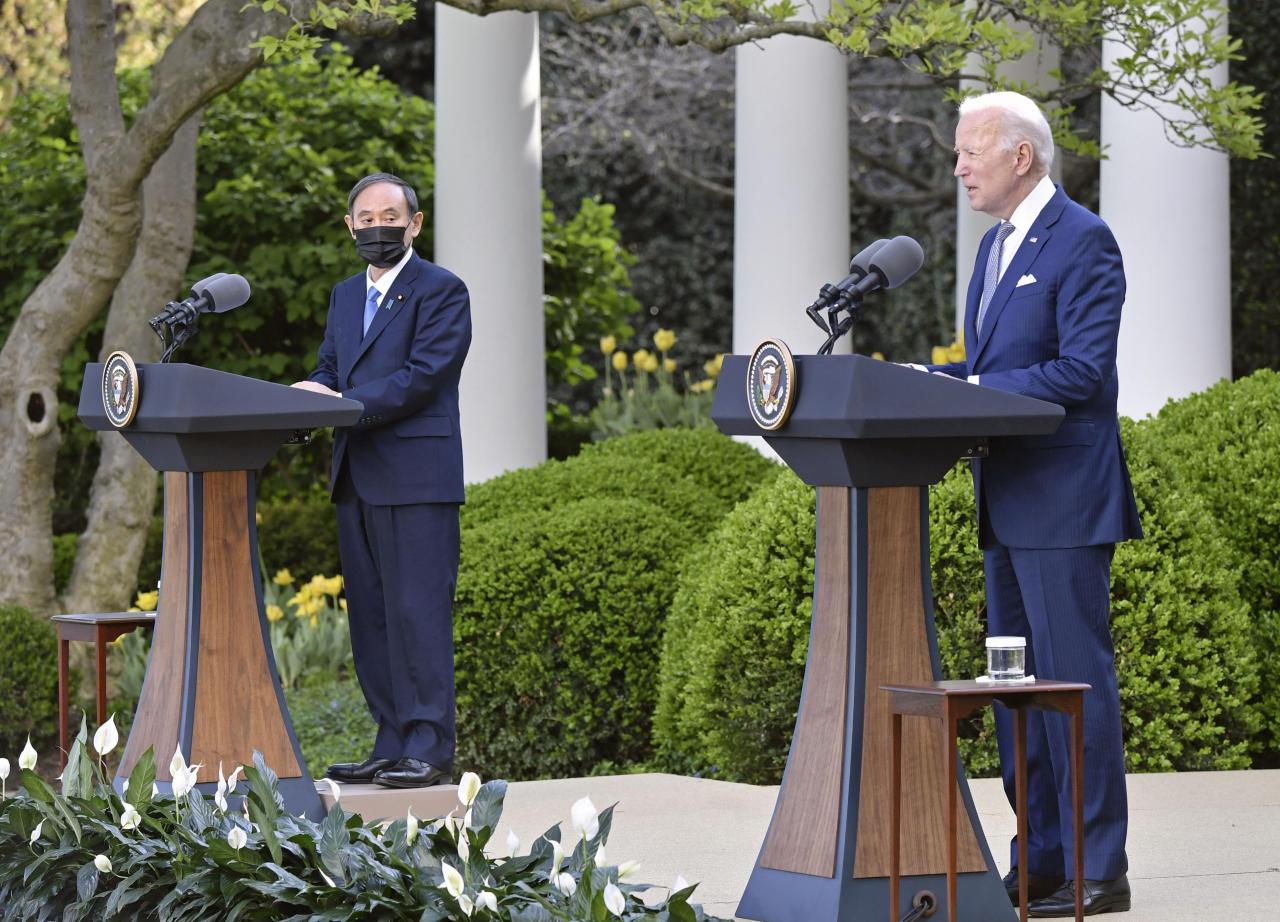 Suga said they are also committed to the complete, irreversible and verifiable dismantlement of all weapons of mass destruction in North Korea.

"We committed to working together to take on the challenges from China and on issues like the East China Sea, the South China Sea, as well as North Korea to ensure a future of a free and open Indo-Pacific," the US president said in a joint press conference that followed his bilateral summit with the Japanese leader in Washington.

"Japan and the United States are two strong democracies in the region, and we're committed to defending, advancing our shared values, including human rights and rule of law," added Biden.

The meeting at the White House marked Biden's first in-person summit with a foreign leader since taking office on Jan. 20. The US leader is set to hold a bilateral summit with South Korean President Moon Jae-in in Washington next month.

Suga said the leaders have also agreed to work to rid North Korea of all weapons of mass destruction, including ballistic missiles.

"On North Korea, we confirmed our commitment to the CVID of all weapons of mass destruction and ballistic missiles of all ranges, and agreed to demand North Korea to fulfill its obligations under Security Council resolutions," he said through an interpreter.

The leaders reaffirmed their commitment to the complete denuclearization of North Korea in a joint statement.

"The United States and Japan reaffirmed their commitment to the complete denuclearization of North Korea, urging North Korea to abide by its obligations under UN Security Council resolutions, and called for full implementation by the international community," the joint statement said.

Biden and Suga said they will strengthen their deterrence against threats stemming from North Korea.

"We intend to strengthen deterrence to maintain peace and stability in the region and will work together and with others to address the dangers associated with North Korea's nuclear and missile program, including the risk of proliferation," they said in the joint statement released by the White House.

North Korea has stayed away from denuclearization dialogue since leader Kim Jong-un's summit with former US President Donald Trump in Hanoi ended without a deal in February 2019.

Pyongyang continues to maintain a self-imposed moratorium on nuclear and long-range missile testing, but resumed its short-range ballistic missile testing last month after a one-year hiatus.

Suga said he and Biden also recognize the importance of working closely with South Korea to denuclearize North Korea.

"Both of us recognize that trilateral cooperation, including the ROK, has never been as important as today, and agreed to promote such collaboration," he said, referring to South Korea by its official name, the Republic of Korea.

Later speaking in a virtual seminar, the Japanese prime minister said he is prepared to meet with the North Korean leader unconditionally to resolve the issue of Japanese nationals believed to have been abducted by Pyongyang decades ago.

"I am prepared myself to meet Chairman Kim Jong-un without conditions toward the resolution of the abduction issue and toward the establishment of a fruitful relationship with North Korea," he said in the webinar hosted by the Washington-based Center for Strategic and International Studies think tank.

Biden reaffirmed his country's commitment to the immediate resolution of the abductions issue, according to the leaders' joint statement.

Suga also highlighted the importance of working with other countries in the region to face various other challenges.

"We agreed that while Japan and the US will take the lead to promote the vision through concrete efforts we will also cooperate with other countries and regions, including the ASEAN, Australia and India," said Suga.