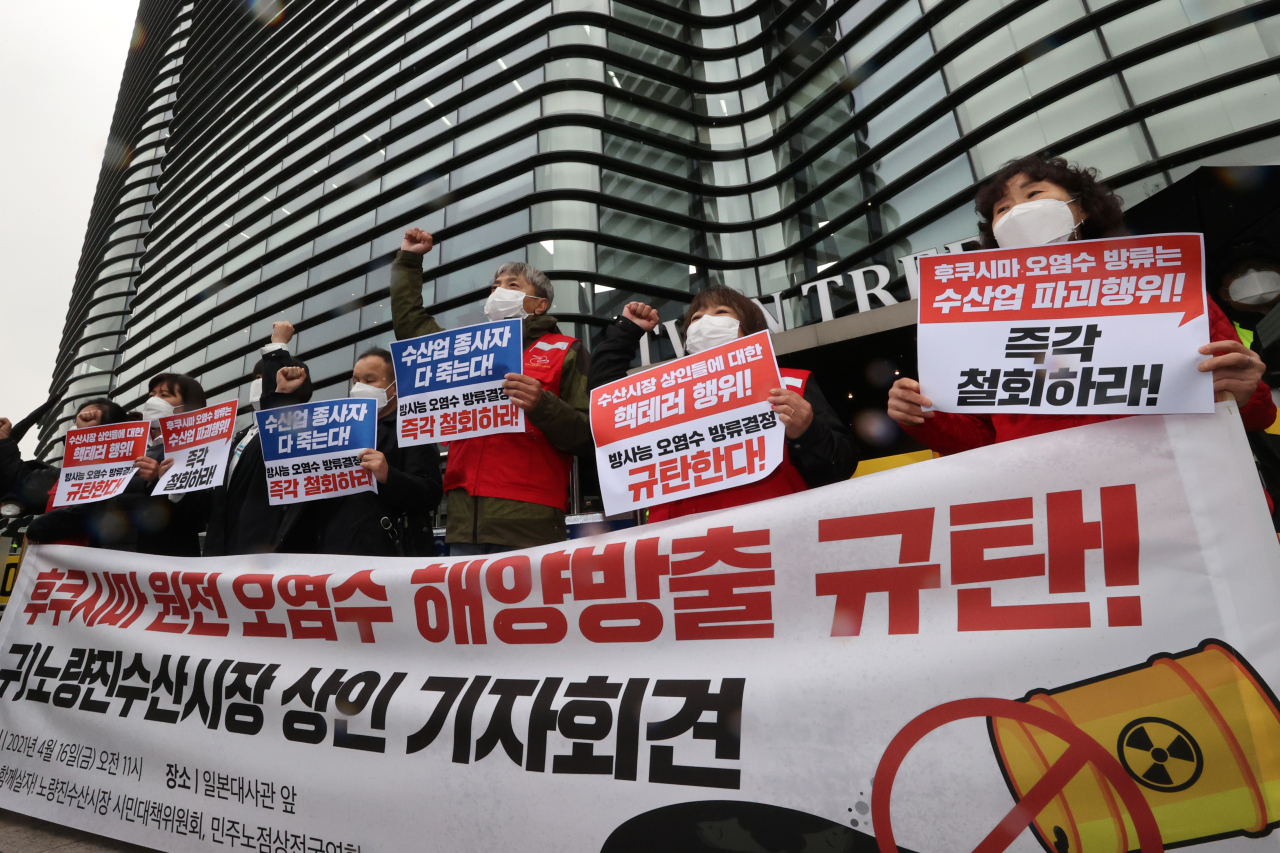 Fish sellers protest Japan’s decision to release wastewater from Fukushima in Seoul on Friday. (Yonhap)
United Nations experts said Japan’s plans to discharge contaminated water from the destroyed Fukushima nuclear plant into the ocean were “very concerning” as this action could impact millions of lives and livelihoods in the Pacific region.

“The release of one million tonnes of contaminated water into the marine environment imposes considerable risks to the full enjoyment of human rights of concerned populations in and beyond the borders of Japan,” independent experts appointed by the UN Human Rights Council said in a statement Thursday.

“The decision is particularly disappointing as experts believe alternative solutions to the problem are available.”

The Fukushima water may contain radioactive carbon-14 as well as other radioactive isotopes, including strontium-90 and tritium, the experts said, adding that a water processing technology called ALPS had failed to completely remove radioactive concentrations in most of the contaminated water stored at the Fukushima plant.

A first ALPS treatment failed to clean the water adequately and there is no guarantee that a second treatment will, the experts said.

Japan has said that the levels of tritium are very low and do not pose a threat to human health.

But scientists warn that the tritium in the water binds to other molecules and affects fish and humans through the food chain.

The experts said they had expressed their concerns to the Japanese government and “remind Japan of its international obligations to prevent exposure to hazardous substances, to conduct environmental impact assessments of the risks that the discharge of water may have, to prevent transboundary environmental harms, and to protect the marine environment.”

The Japanese Cabinet approved on Tuesday a decision to dump into the Pacific Ocean contaminated water from the Fukshima nuclear plant, which was destroyed due to an earthquake and tsunami in 2011.

Over a million tons of water have been used to cool three reactors at Fukushima, which melted down after the tsunami knocked out their cooling systems.

The discharge will begin in about two years, after the water is filtered, and will take place over 30 years, the Japanese government said.

South Korea has summoned the Japanese ambassador in Seoul to protest, while China said Japan’s decision was “extremely irresponsible.”

On Friday, a Japanese newspaper reported that a nuclear reprocessing plant on the outskirts of Tokyo had released contaminated water into the Pacific Ocean over 30 years until 2007. It contained nearly five times the amount of tritium as the Fukushima plant water, the report said.

The Tokyo Shimbun said the Tokai reprocessing plant, which is currently being shut down, continues to discharge water containing tritium.