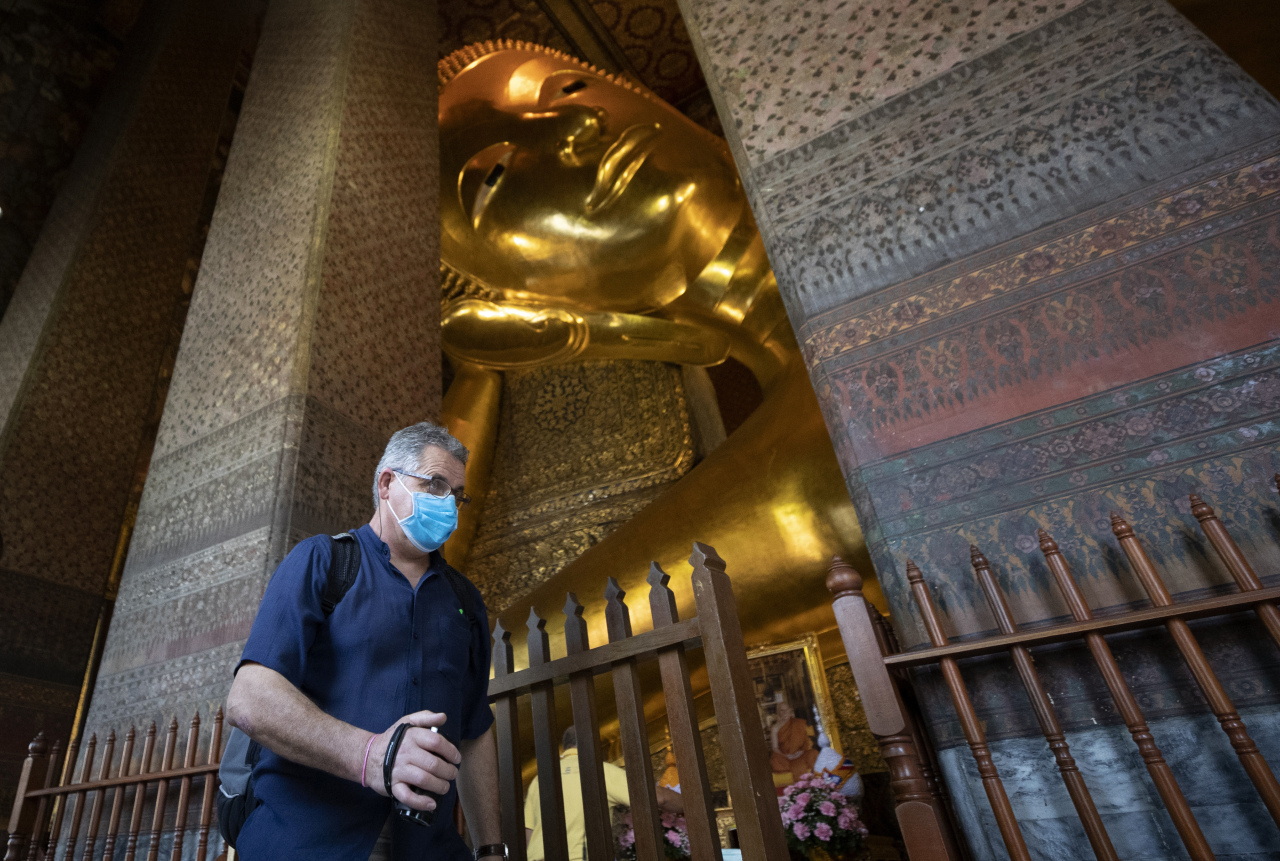 A tourist wearing protective mask walk in front of giant Buddha at Wat Pho temple in Bangkok, Thailand. (AP-Yonhap)
BANGKOK (AP) -- Thailand's Health Ministry warned Sunday that restrictions may need to be tightened to slow the spread of a fresh coronavirus wave, as the country hit a daily record for new cases.

The ministry confirmed 967 new infections, the highest ever in a 24-hour period, bringing Thailand's total to 32,625 cases since January last year  including 97 deaths. The expanding outbreak comes after the country kept the virus largely in check for most of last year.

If the number of cases is still rising in two weeks, measures beyond the current restrictions on nightlife and longstanding social distancing rules will need to be put in place, said Dr. Sophon Iamsirithaworn, deputy director general of the Department of Disease Control.

Most of the recent cases have been traced to an outbreak that originated last month at several nightlife entertainment venues in Bangkok, Sophon said. He said people should be working from home and exercise vigilance.

Tests among those infected at the Bangkok nightspots found some patients infected with the UK variant of the coronavirus, which has been found to be more infectious than the original strain.

The rapid rise in cases has been most marked in the capital, Bangkok, and the tourist destinations of Chiangmai in the north and Chonburi province in the east, home to the seaside resort town of Pattaya.

As a hub for commerce and transport throughout the country, Bangkok is a potential vector for the transmission of any disease. The risk is heightened this week as Thais celebrate their traditional Songkran new year's holiday, during which many normally leave the capital to celebrate with their families in their old hometowns.

Despite the risk, Prime Minister Prayuth Chan-ocha did not issue any ban on inter-provincial travel when he announced measures last week to combat the spread of the virus.

His government ordered 41 provinces to close their entertainment venues for 14 days. Provincial governors were given the power to take additional measures, including entry bans, closures, curfews and tests of visitors from other provinces.

Chiang Mai provincial health officials are requiring visitors from Bangkok and four surrounding provinces to self-quarantine for the duration of their stay, up to 14 days, the state Thai News agency reported. A 280-bed field hospital has been set up to treat COVID-19 patients.

Bangkok Criminal Court on Saturday sentenced the managers of two clubs to which the outbreak was traced to two months in jail for violating emergency measures instituted last year covering health regulations to guard against the virus, said Maj. Gen. Sophon Sarawat, chief of the district where the establishments are located.

The outbreak has become a political issue because of charges that senior members of government may have patronized the clubs and flouted health regulations. The country's transport minister tested positive for the virus, but he and other Cabinet members have denied the allegations.

Dr. Sophon explained that another reason the situation is "worrisome" is because the age groups among which most cases are found are in the 20-29 and 30-39 age brackets.

"These groups have active lifestyles, therefore they can spread the virus to larger numbers of people," Sophon said. He noted also that they are relatively young and strong, tending to show little or no symptoms, thus masking their illness.

Bangkok has already made arrangements for hospitals to expand their number of beds and to set up field hospitals on military property.

A longer-term concern is that Thailand has been lagging in vaccinating its 69 million population, making it more difficult to bounce back from the latest outbreak. According to Deputy Government Spokesperson Traisuree Taisaranakul a total of 537,380 coronavirus vaccine doses were administered in 77 provinces though Friday.