[ The Korea Herald – Send E-mail ]
[Weekender] The Chuseok experience: It all depends on the family
Foreign spouses share their experiences on spending Chuseok with their in-laws
By Paul Kerry
Published : Sep 20, 2018 - 16:13
Updated : Sep 22, 2018 - 10:23
The big Korean holidays are notorious for daughters-in-law.

While their husbands enjoy the luxury of being banished from the kitchen, some women spend several solid days cooking and washing dishes before going back to work.

Others married to less traditional families have an easier time.

For women from overseas, the language and cultural barriers are another potential issue.

“It really depends on the family, if you are lucky, you get a better Chuseok,” said Katherine Corteza, who has spent 12 years in Korea and wrote a thesis on the experiences of foreign spouses here. 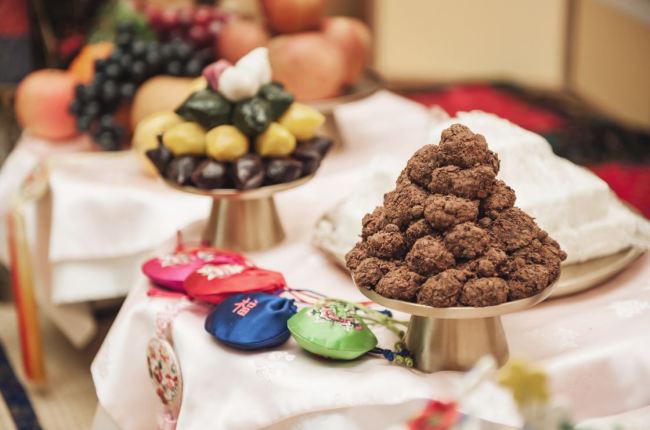 Suwanna Phatratanasan is from Thailand, and some of her family is from Hong Kong, so she was somewhat familiar with the culture of honoring one’s ancestors, but the number of people who came and the amount of preparation for “jesa,” Korea’s ancestral rituals, came as a surprise.

“We wouldn’t have to really cook anything. We would just buy the food and do the offering to the ancestors. But here there is more cooking, and there is a very specific way of cooking things, and the time that it would take to cook the food and the way that the table has to be set up, I’m still confused.”

Phatratanasan’s in-laws do jesa quite often -- about seven or eight times a year. Her mother-in-law tries not to put too much pressure on her or the other women in the family, but her sister-in-law still feels a sense of obligation.

“It puts more pressure on her that she is married to the eldest son, and also that she is Korean and I am not and I don’t feel the same pressure that she feels,” she said.

Not all families do the jesa rites. Anne Campos said her family did not carry out the ritual because they are Christian, although they do visit family graves before Chuseok to pay respects.

Instead, the holiday becomes a big family get-together. There is still a lot of food involved, but they also go out hiking, or to the park or movies. Last year, they rented a bus and traveled round South Jeolla Province.

Campos still had to get used to it, as her family in the Philippines is not that close.

“I would feel like ‘Why are you doing this? You have to eat and gather together?’” she said.

“Before I just wanted to be with my husband or something like that. Now that I have kids I think it’s good to be with their cousins and aunts and uncles. So it’s actually me adjusting more, rather than them having a foreigner in the family. They are very open actually.”

Campos’ parents moved to Korea, and they join them on some family gatherings. It also means she can be like the other women in the family and spend the second or third day of Chuseok with her own parents.

Corteza already knew a lot about the holiday and had heard her fair share of stories, both good and bad, with the most common problem being that they are immersed in a very intense and unfamiliar environment in which they have to cook, bow and behave in a specific way.

“And then when they cannot do it properly they get reprimanded for that,” she explained. “And because they don’t speak Korean very well, they cannot really explain themselves. Someone has to teach them for them to know these things.”

She said it was especially difficult for mothers whose children are still babies “And it’s more difficult for women who are working, because they have to do the three.”

“I think compared to Korean women, the biggest advantage is that we don’t have the emotional baggage that we can’t see our families at Chuseok.”

As the wife of the eldest son, Corteza initially felt a lot of pressure on her first family Chuseok in 2014.

“I do cook Korean food, but it’s always with a twist, because I am a foreigner so I just cook what I like to cook,” she said.

Luckily, the family hasn’t done jesa since they have been married and so have less expectations than some for traditional food. And her husband suggested to her that, as the host, she should just cook whatever she wanted.

The food was popular, although she feels that some of her family would prefer something more traditional.

For her, communication is one of the biggest issues. She speaks Korean well, but she is worried about making a faux pas, as her in-laws are a bit stiff at gatherings.

“I know I am a foreigner so the feeling of being an outsider is something I am accustomed to but still when they are all gathered together you still feel a visitor all the time,” she said.

“I would actually just tell my mother-in-law I will do the dishes. I would rather stand there doing the dishes than stand there awkwardly staring and waiting for someone to talk.”

Communication is also an issue for Leila Quintos. She is enjoying married life in Seoul, but the language barrier is the biggest problem for her.

Chuseok is a relaxed time, yet she isn’t really able to join in the conversation. So while her in-laws are playing Go Stop, she spends more time with her son and the other children.

Chuseok still leaves her with an unsatisfied wish to be part of something, so she has developed her own ritual: Taking photos of herself in hanbok.

“That’s the best thing I could do to celebrate Chuseok for myself,” she said.

“It’s not really traditional, but somehow I feel part of this country wearing that hanbok.”