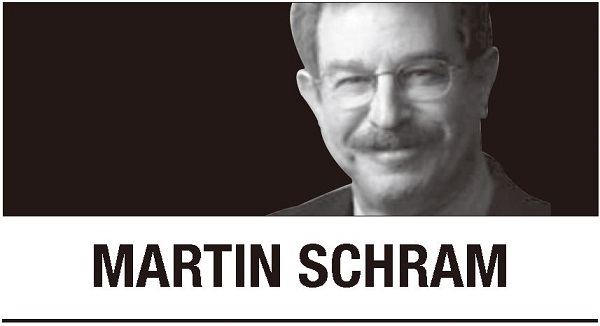 Our news screens were erupting with breaking news of yet another mass shooting. But this time the news that began with a barrage of bullets also became something special -- a tale of battlefield heroics on the homefront of a nightspot in Colorado Springs.

A brave military veteran, Richard Fierro, had rushed toward the first flashes of light as he had been trained to do. He smashed the gunman to the ground and pummeled. Mercifully and miraculously, a horrific fatality count of five innocent souls never became 50.

A day later we saw yet another godawful newsbreak. This one should have sent scores of famous-name Republican veterans of America's political wars rushing toward the news flash. Yet it didn't. But it may not be too late for scores of Republicans to once again show they can be a "Grand Old Party." After all, we know that sometimes it takes a while before words of political incitement trigger warped individuals to commit horrific acts.

Now we have heard what sounded sickeningly like another political battle call -- and we are all smart enough to sense the danger that could follow.

Mike Pompeo, Donald Trump’s former secretary of state and CIA director, made precisely the news he wanted to make last week. In an interview with Semafor correspondents David Weigel and Shelby Talcott, Pompeo, a conservative Republican, issued a carefully politically calculated pronouncement about an individual most Americans probably think they never heard of: “The most dangerous person in the world is Randi Weingarten. It’s not a close call.”

Pompeo was talking about the president of the American Federation of Teachers. Indeed, he was so intent upon making his attack on Weingarten the headline of his story that he asked himself a question he hadn’t been asked -- just to attack the teachers union leader. He said:

Pompeo did not just stumble into this populist name-calling demagoguery out of ignorance. He graduated first in his class at West Point, then went to Harvard to get his law degree. He’s been traveling the country to see if he can generate his own groundswell of Trump-like loyal voter support if he chooses to run for president in 2024 against his former boss and others.

Indeed, Pompeo is trying to play the Trump demagoguery card well before 2024, just as Trump found a way to make headlines long before his 2016 campaign. Remember Trump got himself on TV by initially repeating his blatantly false claim that President Barack Obama wasn’t born in the United States, but Kenya.

Now Pompeo is trying to lure Trump’s base by demonizing the teachers and their union. But the Republican Party that once stood for patriotism, law and order, still has many prominent political leaders who understand that Pompeo’s self-serving political public relations ploy can spin horribly out of control. Pompeo’s words can inflame any of the many warped minds who have access to weapons. He could endanger not only the teachers union president, but all teachers, in all schools, who go to work each day, are woefully underpaid -- but represent the infrastructure that is building America’s next generations.

On Wednesday, Weingarten appeared on MSNBC’s “Morning Joe,” whose host, Joe Scarborough, was a former conservative Republican congressman from Florida who broke with his party over its support of Trump. Scarborough told her “It’s not just an attack on you, it’s an attack on all teachers.”

“You and I both know the history of incitement,” Weingarten told her host, “And what happens when you start with words that get increasingly demagogic -- and what that then does. … Do we need to have a mass shooting every night? Every day? … This is intended incitement. … What I’m concerned about is what it does for teachers in classrooms. And for parents. And for kids. … What does that do in terms of bringing people together.”

Perhaps the ultimate point is that Pompeo’s attack on Weingarten and teachers must do just that. Pompeo’s demagogic words must bring together all the sane patriots who still call themselves Republicans. They must unite to condemn his message -- and tell Americans we must work with our teachers to help them build the infrastructure that will be America’s ultimate bridge to tomorrow.