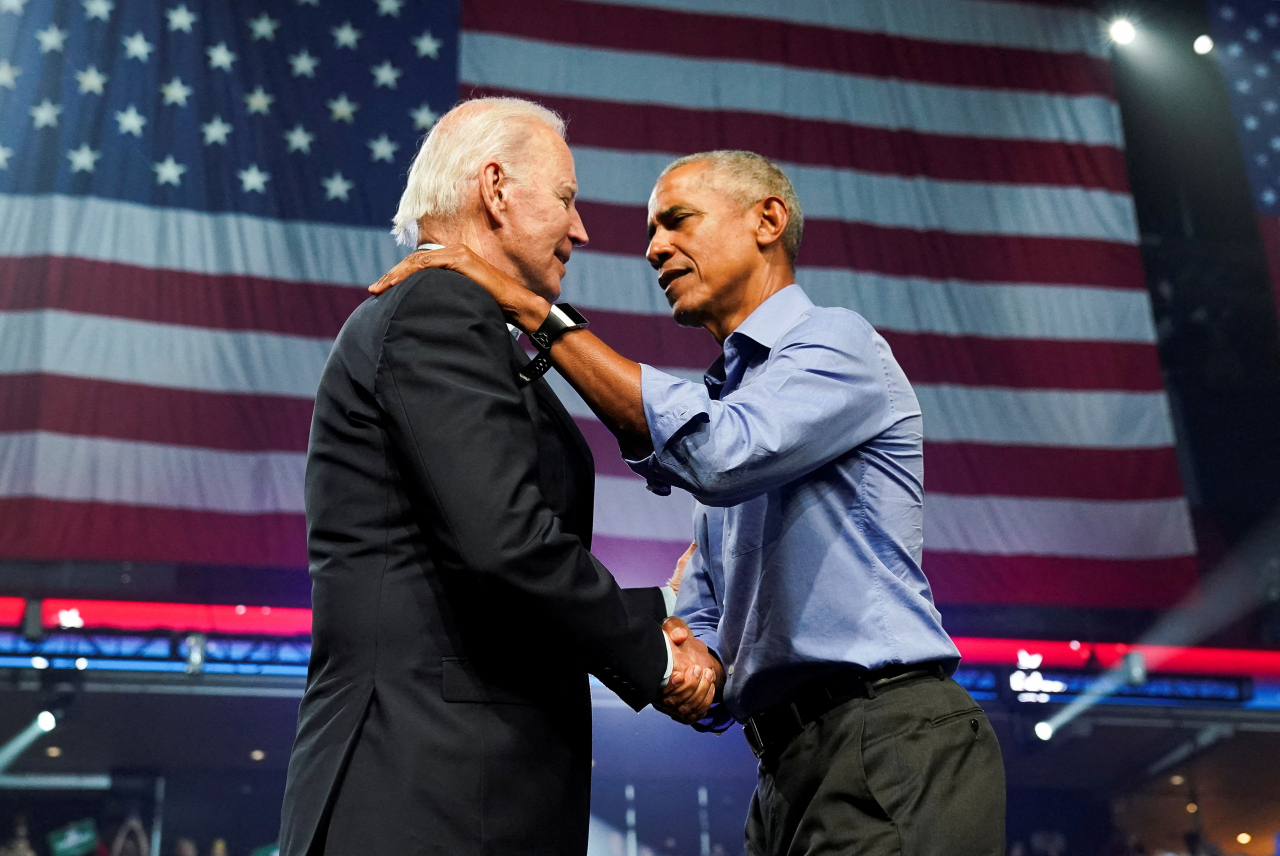 PHILADELPHIA -- US President Joe Biden, Democratic superstar Barack Obama and Republican firebrand Donald Trump all converged in Pennsylvania on Saturday to push their parties to the finishing line in a race Biden said marks a "defining" moment for US democracy.

The battle of the serving and two former presidents marked the start of a final crescendo before Tuesday when Americans will decide who controls Congress during the last two years of Biden's first term.

Polls put Republicans well ahead in the fight for the House of Representatives and also show them with momentum in the Senate. Voters, who are already riled up by culture wars around gay rights and abortion, are seeking to take out their frustration over four-decades-high inflation and rising illegal immigration.

With Pennsylvania as one of the handful of swing states that will decide the overall balance of power, both sides brought out their big guns.

Trump -- who was defeated by Biden in 2020 but has spent the interval promoting conspiracy theories and plotting a possible White House comeback -- flew to Latrobe to boost Fetterman's opponent, TV celebrity doctor Mehmet Oz, and Shapiro's far-right opponent Doug Mastriano.

Speaking to thousands in a Philadelphia arena, Biden and the Democratic candidates labeled the Republicans as the party of the wealthy and emphasized their support for trade unions, social security and abortion access.

But Biden, citing Trump Republicans' growing support for conspiracy theories, said an even bigger agenda was at stake.

"Democracy is literally on the ballot. This is a defining moment for the nation and we all, we all must speak with one voice," Biden said.

Obama, who had also addressed an earlier rally in Pittsburgh, got the loudest cheers of the night, repeatedly urging supporters to make sure they vote.

But "fundamental rights ... reason and decency are on the ballot," he said, attacking Republicans as increasingly averse to everything from science to respect for rules.

"Democracy itself is on the ballot. The stakes are high," Obama said in an echo of Biden's warning, his voice going hoarse.

Still the party's most bankable star six years after leaving the White House, Obama hopes his support will give Fetterman the crucial extra shove.

Although Fetterman faces the added challenge of recovering from a serious stroke, he and Oz are in a dead heat.

In Latrobe, Trump was tapping into support from a working class region that delivered him big margins in the 2016 and 2020 presidential elections.

Success for candidates he supports on Tuesday would help Trump launch his own comeback campaign, despite facing serious legal threats over attempts to overturn his 2020 defeat and the hoarding of top secret documents from the White House at his Florida golf resort.

One supporter arriving early for the rally, Shawn Ecker Grey, 44, voiced excitement about a possible Trump candidacy for 2024 "because we need our country back. We really do. And it's not going to happen if someone doesn't stand up like he is."

Pennsylvania is seen as a must-win for control of the Senate, but it also weighs on the balance of power among the country's 50 state governors, whose decisions impact most aspects of voters' lives, from education and health care to voting rights.

Democratic gubernatorial nominee Shapiro has been spotlighting the fringe views of Mastriano and his involvement in the Trump-led attempt to overturn the last election.

A Mastriano victory would give him oversight of the state's voting system for the 2024 presidential race, potentially opening the door to a repeat of the kind of unprecedented manipulations that Trump's team tried and ultimately failed to use to subvert Biden's 2020 win.

Trump has already claimed baselessly that Pennsylvania has "rigged" the midterms, signaling the now well-worn tactic to try and undermine voters' trust in results if they go the wrong way.

But ahead of his rally, Trump's office said he would focus on kitchen table issues.

"As Biden's approval rating plummets, Pennsylvania crime spikes, and Pennsylvanians grapple with a 74 percent hike in heating oil, coupled with record inflation, just weeks away from winter," Trump's office said in a statement.