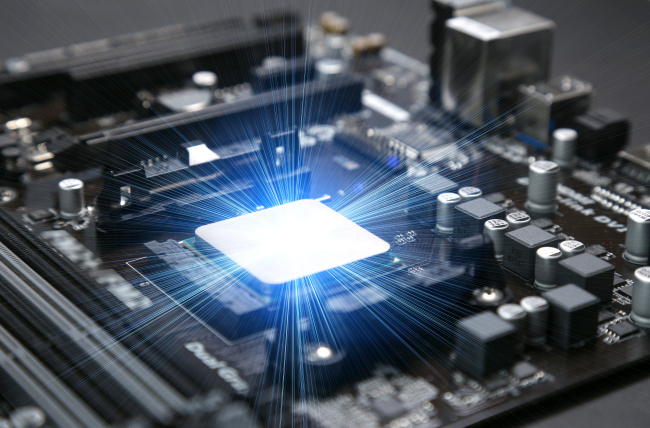 A visual concept image of a semiconductor chip (123rf)

SUWON, Gyeonggi Province -- The memory chip upcycle has already peaked this year, while the downcycle is projected to continue until 2025 in a worst-case scenario, an executive from the US-based market intelligence IDC said Tuesday.

Kim Soo-kyoum, associate vice president of semiconductor at IDC, cited a sharp decline in consumer demand and the projected price drop over the course of three years with the introduction of new chip factories and the growing competition in NAND flash industry.

Especially among personal devices, demand for personal computers will continue to fall through 2023 -- by 13 percent in 2022 and by 2 percent in 2023 -- while that of mobile phones is expected to recover, seeing a 5 percent growth next year, according to Kim.

"The component shortage is now being overshadowed by the demand weakness," Kim told an audience at SEMI Korea Members Day held in Suwon, Gyeonggi Province.

Although the rebound in consumer demand is on track, the increasing supply will dampen the memory downcycle, affecting the industry largely dominated by a handful of players including South Korean firms Samsung Electronics and SK hynix.

The increase in capacity with new fabs waiting to go operational, as well as increasing order backlogs, will cause the prices of both DRAM and NAND flash products to continue to deflate until 2025.

According to IDC, NAND flash products will see a drop in pricing by over 20 percent each year from 2023 to 2025, while DRAM products' price is likely to dip by around 15 percent annually over the cited period.

The degree of the market correction will be more severe in the NAND flash market due to increasing competition of Chinese players, whereas the price volatility of DRAM products will be milder due to the limited number of competitors, Kim said.