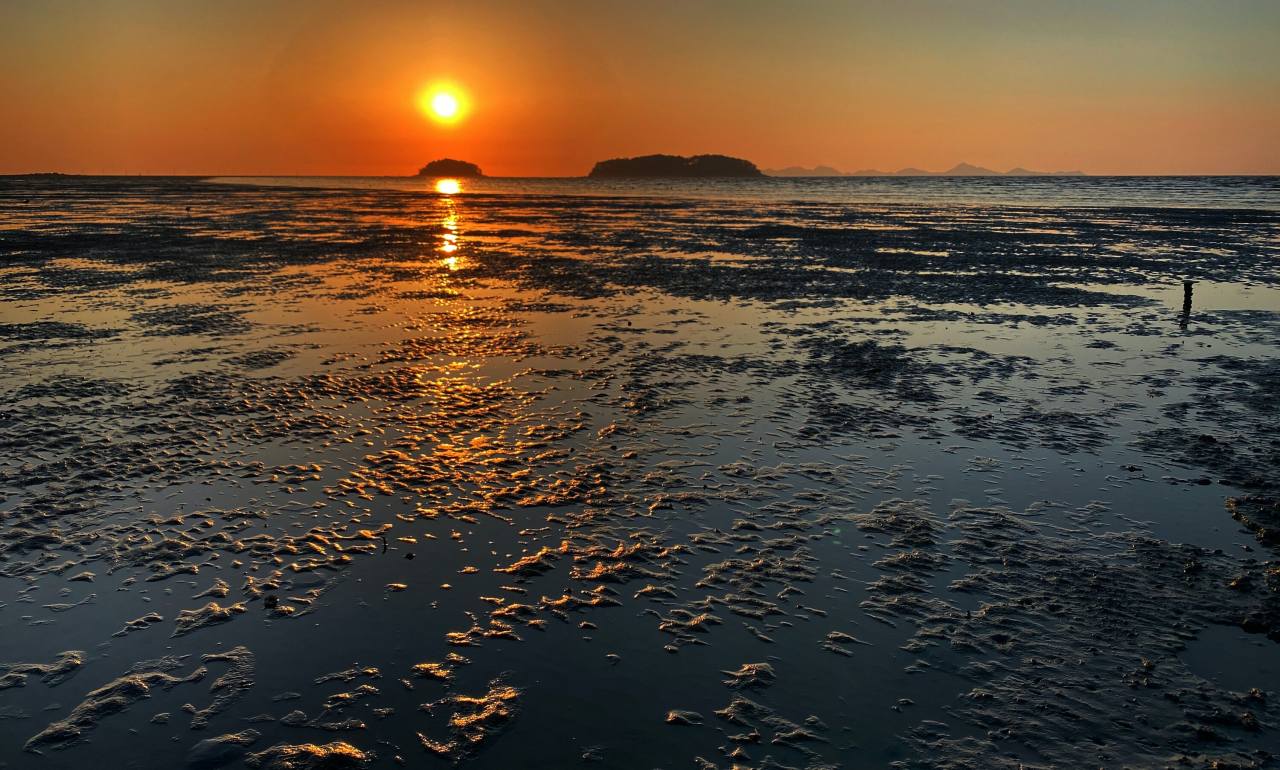 The sun sets over the Sojukdo (left) and Daejukdo in the West Sea off the Gochang Getbol Tidal Flats, which are listed on the UNESCO World Heritage convention for exhibiting a complex combination of geological, oceanographic and climatologic coastal diverse sedimentary systems. Photo © Hyungwon Kang
Twice a day, the West Sea tides rise and drain the Korean tidal flats, called getbol, along the western coast of Korea.

The slow draining and replenishing of the getbol, as the seawater comes under the influence of the moon, breathes oxygen-rich life into the muddy and sandy West Sea coast, creating a variety of getbol wetlands rich with the aquatic and amphibious creatures that live in them.

The getbol are a complex muddy and sandy environment submerged in the water at high tide and exposed at low tide, providing life-sustaining conditions for a healthy food chain of aquatic life that is a rich source of seafood for the getbol farmers.

The Gochang getbol in North Jeolla Province, one of the four sites in Korea to have been listed as a UNESCO Natural World Heritage area, is a treasure trove of geodiversity containing sandy wetlands, muddy tidal flats and an ever-changing land mass called a chenier, a wind- and water-shaped sandy delta between the shore and the sea.

“When the tide goes out, tractors can go out about 5 kilometers into the (flats) to see all kinds of getbol spectrum containing a diversity of ecosystems in Gochang getbol. Among the hundreds of marine species is a crab named ‘beomge,’ which only exists in Gochang. It is home to some 255 kinds of marine life and 101 types of migratory birds,” explained Jeong Young-jin, director of the Ramsar Gochang Tidal Flat Center. Korea’s seafood-rich food culture is possible, in part, due to getbol along the muddy western coasts filled with mineral-rich sediment deposits from many rivers that drain into the West Sea. 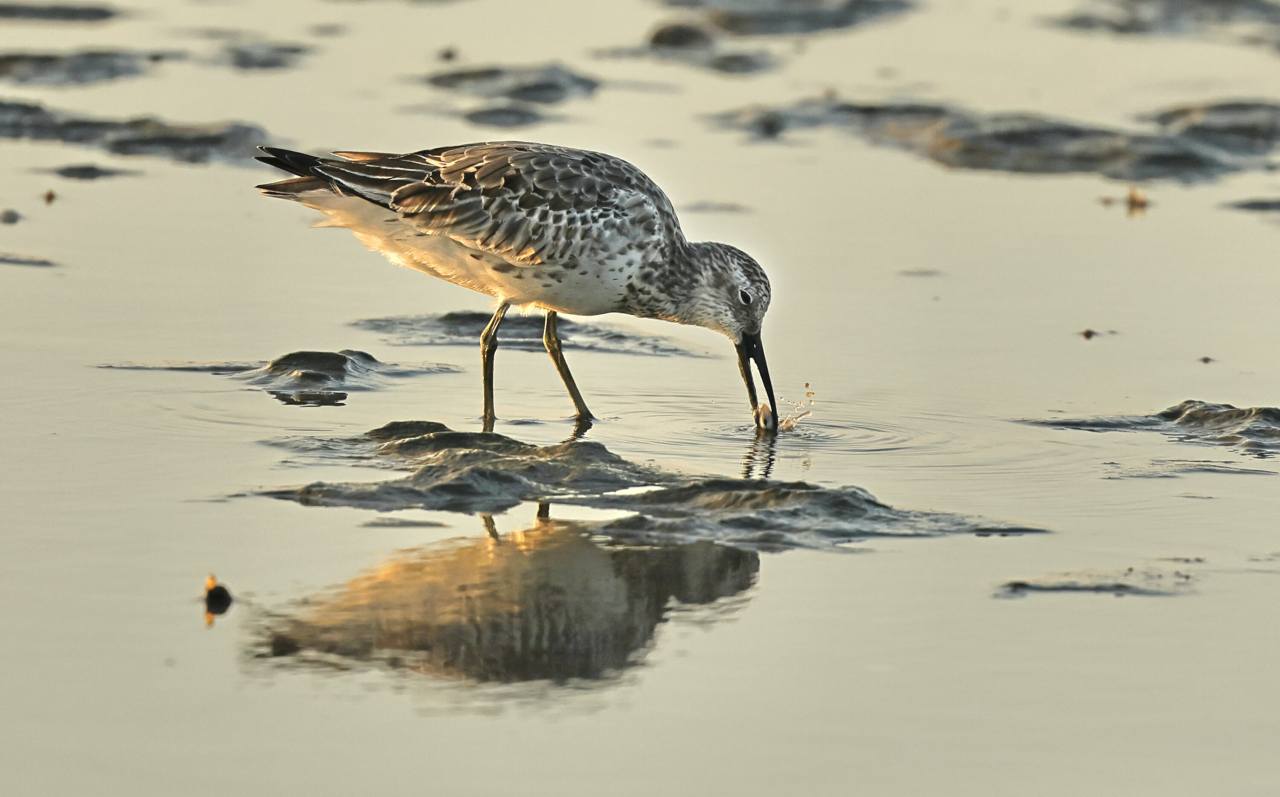 A great knot hunts for food in the mud flats at Gochang. Photo @ Hyungwon Kang
The diverse seafood on Korean tables comes from the ancient getbol culture. Since ancient times, the Korean getbol harvesting practice has evolved as humans became the environment’s top predator, whose daily harvest and consumption of seafood have seen us maintain a seafood culture as part of sustainable nature.

Getbol provide a critical livelihood for people who collect clams, long-arm octopuses, locally called nakji, crabs and other edible seafood living in the coastal wetlands. A saltwater clam called bajirak jogae is enormously popular in Korea and Japan, with the lion’s share of the clams harvested in Korea exported to Japan.

Korea’s West Sea has an unusually high tidal range, where the receding water during the low tide can be more than 9 meters below the high water mark at some beaches.

“The tidal range in Gochang getbol is around 6 meters,” said Kim Jin-keun, an honorary wetland guide with the Ramsar Gochang Tidal Flat Center.

The Ramsar Gochang Tidal Flat Center, which gets its name from the Ramsar Convention on Wetlands, is dedicated to protecting the waterfowl habitat in the Gochang area. The UNESCO Gochang Biosphere Reserve consists of the forest ecosystem, the coastal ecosystem of the Gochang getbol and the freshwater ecosystem of Dongrim Reservoir and Ungok wetland, which is popular with migratory birds.

Migratory birds, such as bar-tailed godwits and great knots, flock in large numbers to Korea’s West Sea to feast at the getbol before continuing on their long flights north to Siberia and Alaska or to the southern Pacific Ocean coastal wetlands in New Zealand and Australia.

A record-setting migratory bird, bar-tailed godwits lose half of their body weight for each intercontinental flight of over 10,000 kilometers, going between Alaska’s Yukon-Kuskokwim Delta and nearby Lake Laberge in Canada and the South Pacific, and stopping off in Korea on the way. 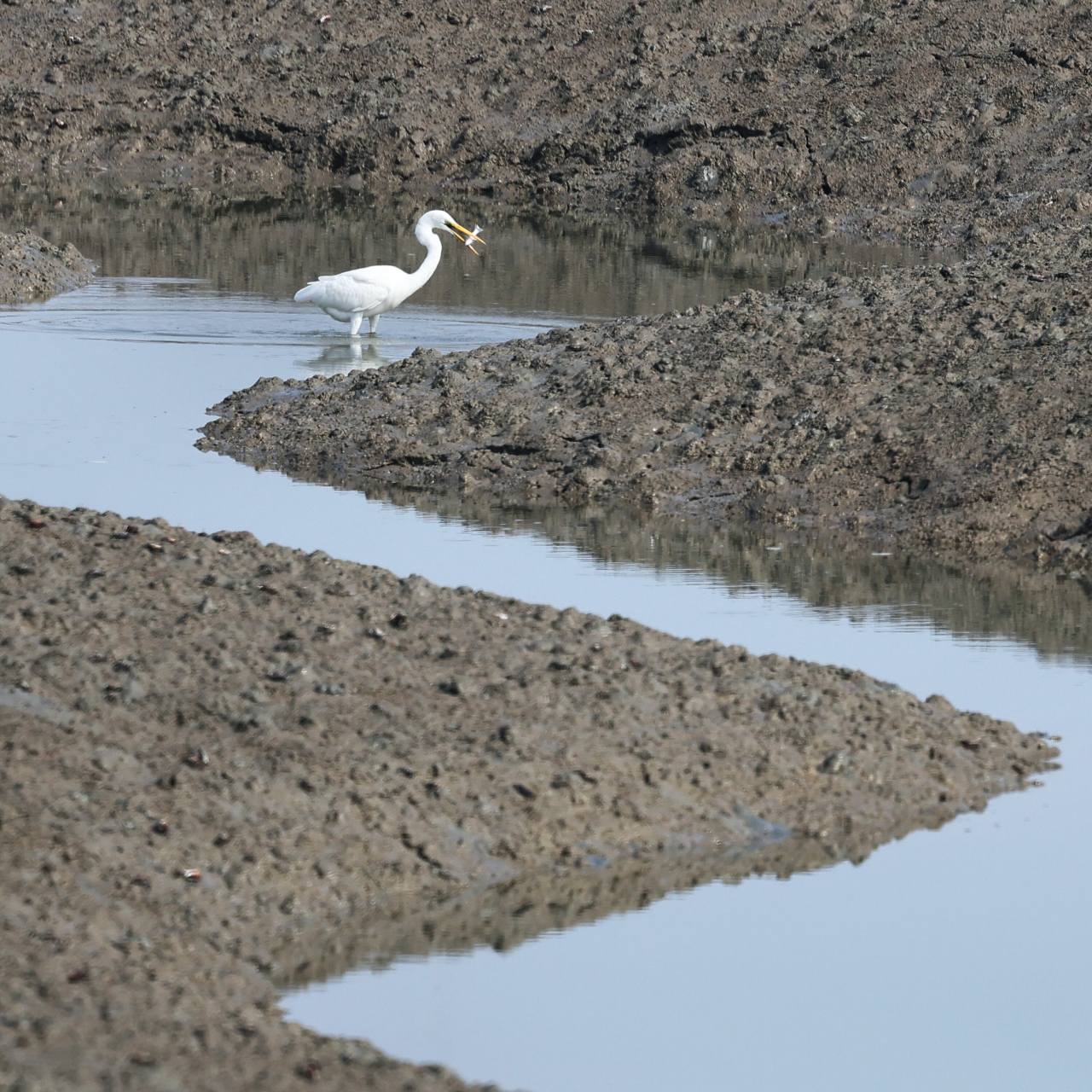 A white heron fishes for food in the mud flats at Gochang.Photo © Hyungwon Kang
Some great knots, which are seen in abundance in the Gochang getbol on their way to and from Eastern Siberia, have flown more than 6,000 kilometers from Australia by the time they arrive in Korea to search for food.

Korea used to have more getbol and wetlands along its western coastline.

During the Mongol invasions of Korea (1231-1259) the Goryeo Kingdom government-in-exile on Ganghwado turned to land reclamation of the coastal wetlands around the island to create more rice fields to feed the population during the ongoing war.

Sotaesan (1891-1943), the founder of Won Buddhism, the fourth-largest religious denomination in Korea, helped the people of his village escape poverty by creating an economic cooperative to convert about 13.6 hectares of coastal wetlands into rice fields in front of his village in Yeonggwang, South Jeolla Province, in 1918.

The success of the land reclamation project was the basis for the “self-reliance” principle that later blossomed into Won Buddhism, an organized religion that now has over 500 temples in Korea and some 68 places of worship in 24 countries abroad.

For humans, land reclamation means rapid economic development, but it is a loss of habitat for migratory birds.

One of the most recent reclamation projects, the Saemangeum Seawall Project, which dammed the wetlands to create land for agriculture and a giant industrial complex, is believed to have had serious consequences for the migrating population of great knots. 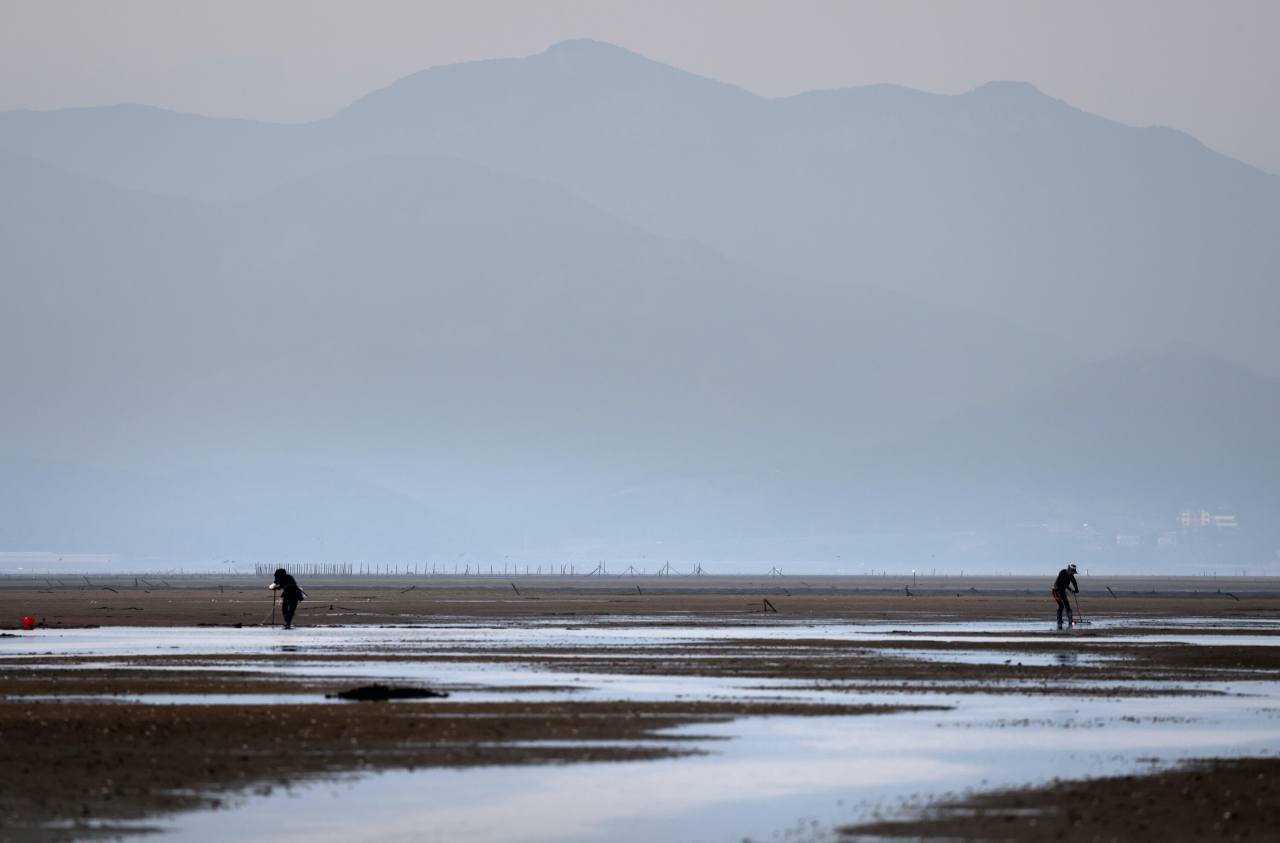 Farmers work on the Gaocheang getbol, which is a treasure trove of diverse seafood-sustaining ecosystems in Gaocheang, North Jeolla Province. Photo © Hyungwon Kang
The project, conducted from 1991 to 2010, reclaimed 40,900 hectares of tidal flats, equal to about two-thirds of the area of Seoul.

According to the East Asian-Australasian Flyway Partnership, in 2006, the loss of the great knot’s most important feeding ground in Korea resulted in a loss of around one-third of the great knots’ population. The EAAFP is a network of countries and organizations in the East Asian-Australasian path of migratory birds, of which both South Korea and North Korea are members.