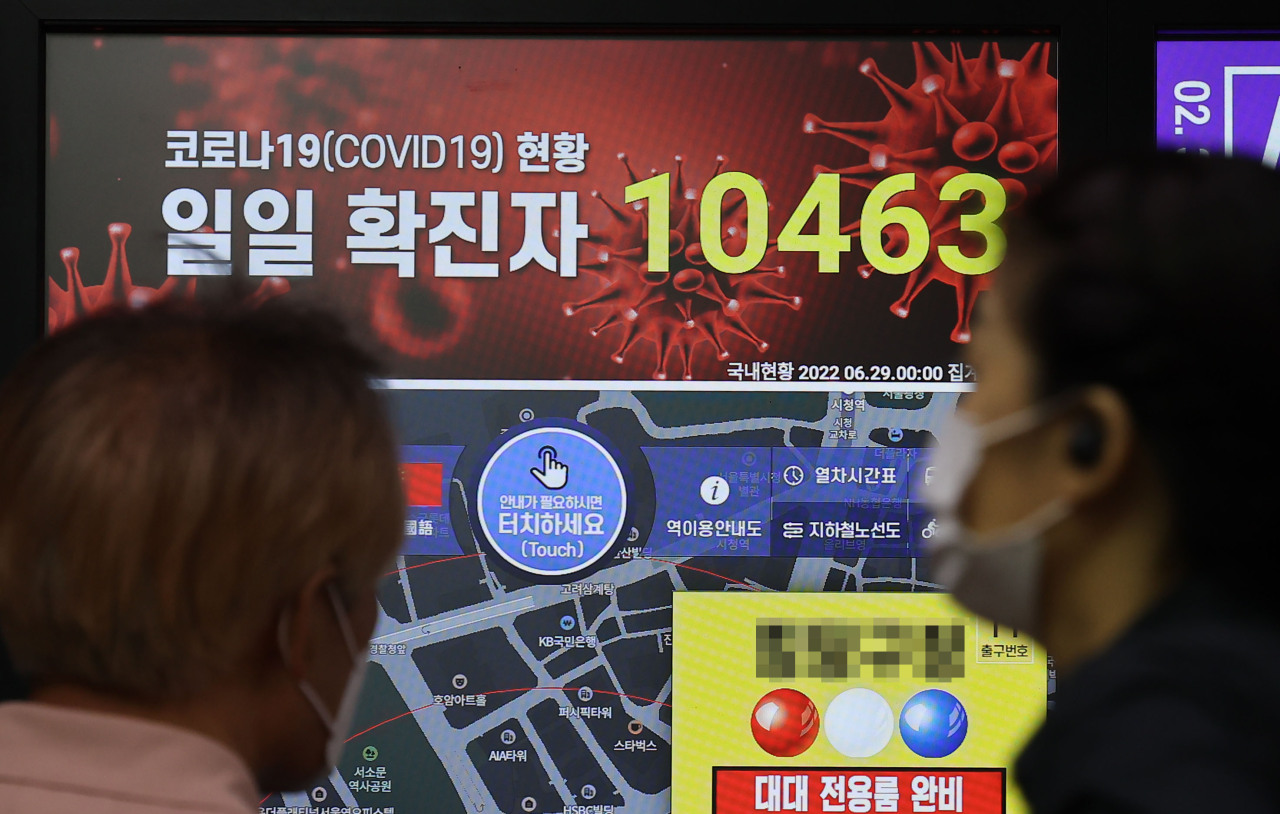 South Korea logged 10,463 new cases of COVID-19 on Wednesday. (Yonhap)
The thousands of cases South Korea is still counting every day may be as low as the numbers are going to get, according to some top public health officials.

Lim Sook-young, a senior Korea Disease Control and Prevention Agency official, told a news briefing Tuesday that the downward slope of the country’s COVID-19 curve may have hit a dead end.

“I think we’ve reached a limit on how low the numbers can drop,” she said. She said the case counts were anticipated to largely hover around where they are now, at least for a while.

Dr. Jung Jae-hun, a professor of preventive medicine at Gachon University, said in a phone call with The Korea Herald that a “medium-sized wave approaching is inevitable.” He said as the rebound in cases has started only a week ago, it was hard to estimate at this point when the next wave will happen, and how bad it was going to be.

“I don’t think it’s going to be as bad as the omicron wave, but I think it’s safe to say it’s coming our way,” said Jung, who is the head of the university’s big-data medical analytics.

“Other factors influencing the future course of the situation would be a novel variant, which may not necessarily a sub-type of omicron -- it could be something else entirely new. And then there’s also the question of how quickly immunity starts to wane after infection or vaccination, or both.”

The omicron surge left more than a third of South Korea’s population infected. As roughly 90 percent here have been fully vaccinated, the majority were “breakthrough-infected” and with “hybrid immunity,” which is immunity acquired from both vaccination and infection.

Experts are divided on how durable that immunity might be, especially against emerging variants.

Omicron’s more recent subvariant BA.5 made up 7.5 percent of all sequenced cases, a weekly government analysis showed. BA.2.3 and BA.2, also omicron subvariants, had the highest shares at 51.1 percent and 32.7 percent, respectively.

South Korea has no COVID-19-related restrictions aside from a mask mandate indoors and a seven-day isolation requirement after a positive test. Post-travel quarantines have also been removed, although inbound travelers are still asked to submit proof of being negative.