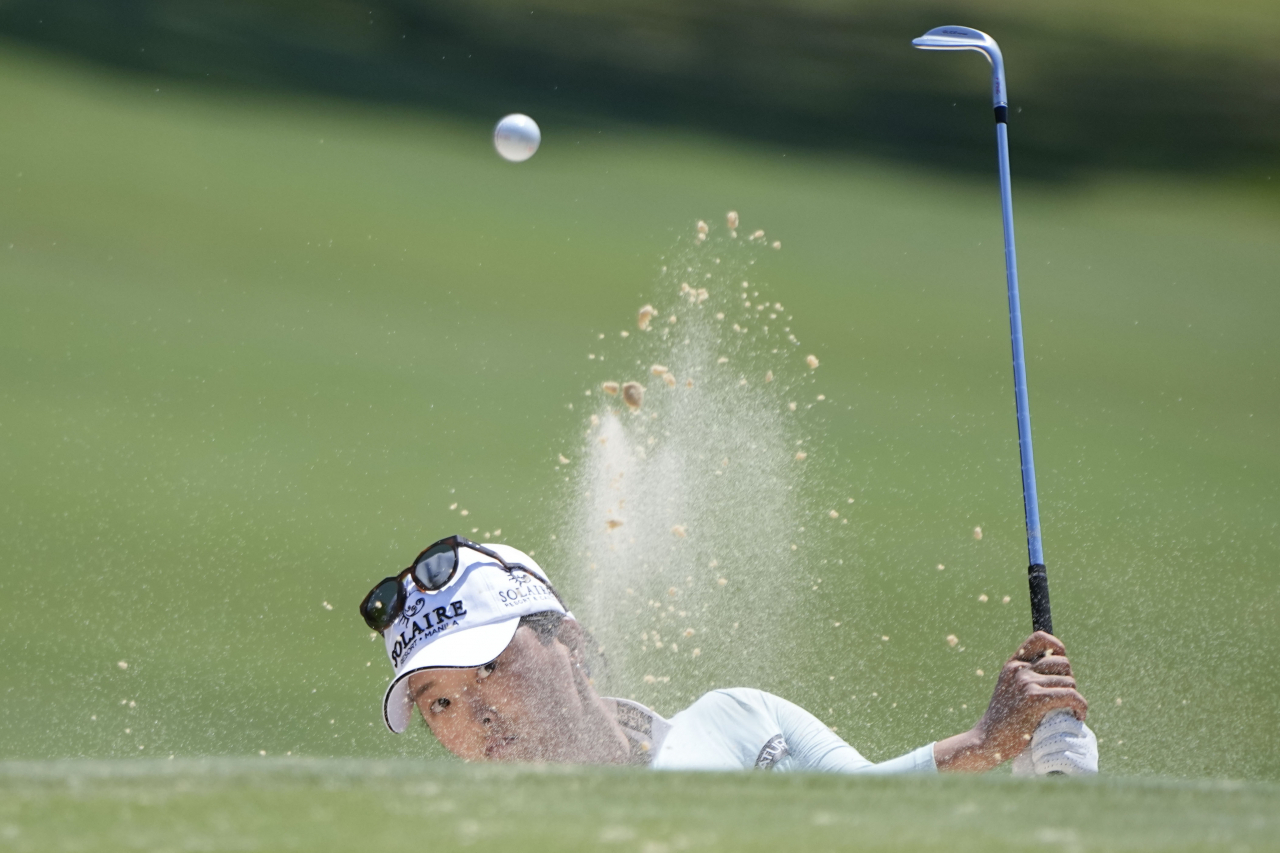 In this Associated Press photo, Ko Jin-young of South Korea plays a bunker shot at the 18th hole during a practice round for the U.S. Women's Open at Pine Needles Lodge & Golf Club in Southern Pines, North Carolina, on Tuesday. (AP)

South Korean LPGA stars will seek to end the country's major championship drought this week at the oldest of the five big tournaments.

Twenty-two players from South Korea will compete in the US Women's Open, which tees off Thursday at Pine Needles Lodge & Country Club in Southern Pines, North Carolina.

South Korea, long a dominant force in women's golf, has been shut out at the last six majors, the longest such drought since the country's golfers were denied at seven consecutive majors between 2009 and 2011.

The last South Korean winner of an LPGA major is Kim A-lim from the US Women's Open in December 2020.

South Korea went winless in five majors last year, the first major-less season for the country since 2010, and watched Jennifer Kupcho of the United States claim the first major of this year at the Chevron Championship in April.

This will be the 77th edition of the US Women's Open, the oldest major in women's golf. South Korea has been successful in the American national championship, having produced 10 champions who have combined for 11 wins -- with Park In-bee, the 2008 and 2013 champion, being the only multiple winner.

Park, however, has withdrawn from this week's event, citing her need to get back into better form.

Leading the Korean contingent will be world No. 1 Ko Jin-young, a two-time major champion going for her first US Women's Open title.

Ko skipped last week's tournament, the Bank of Hope LPGA Match-Play, and she has been practicing at Pine Needles since the weekend.

"I really wanted to play this golf course. I heard that it's a tough one but it's going to be fun," Ko said at her pretournament press conference Tuesday. "Greens look bigger but landing areas are small. So we need to hit iron shots like darts."

Ko said she has been trying to fix problems with her backswing, and she wants to start adding to her win total after taking the HSBC Women's Champions title in Singapore in March.

"I've had a couple chances to win, and I want more wins this year," Ko said. "But my swing or my game is fine so far. I am working on it with my caddie and with my team, and so it's good."

Ko has been paired with Kupcho and another American star, Lexi Thompson, in the first two rounds.

Ji qualified for this year's US Women's Open by winning the match-play event last week in Las Vegas. (Yonhap)