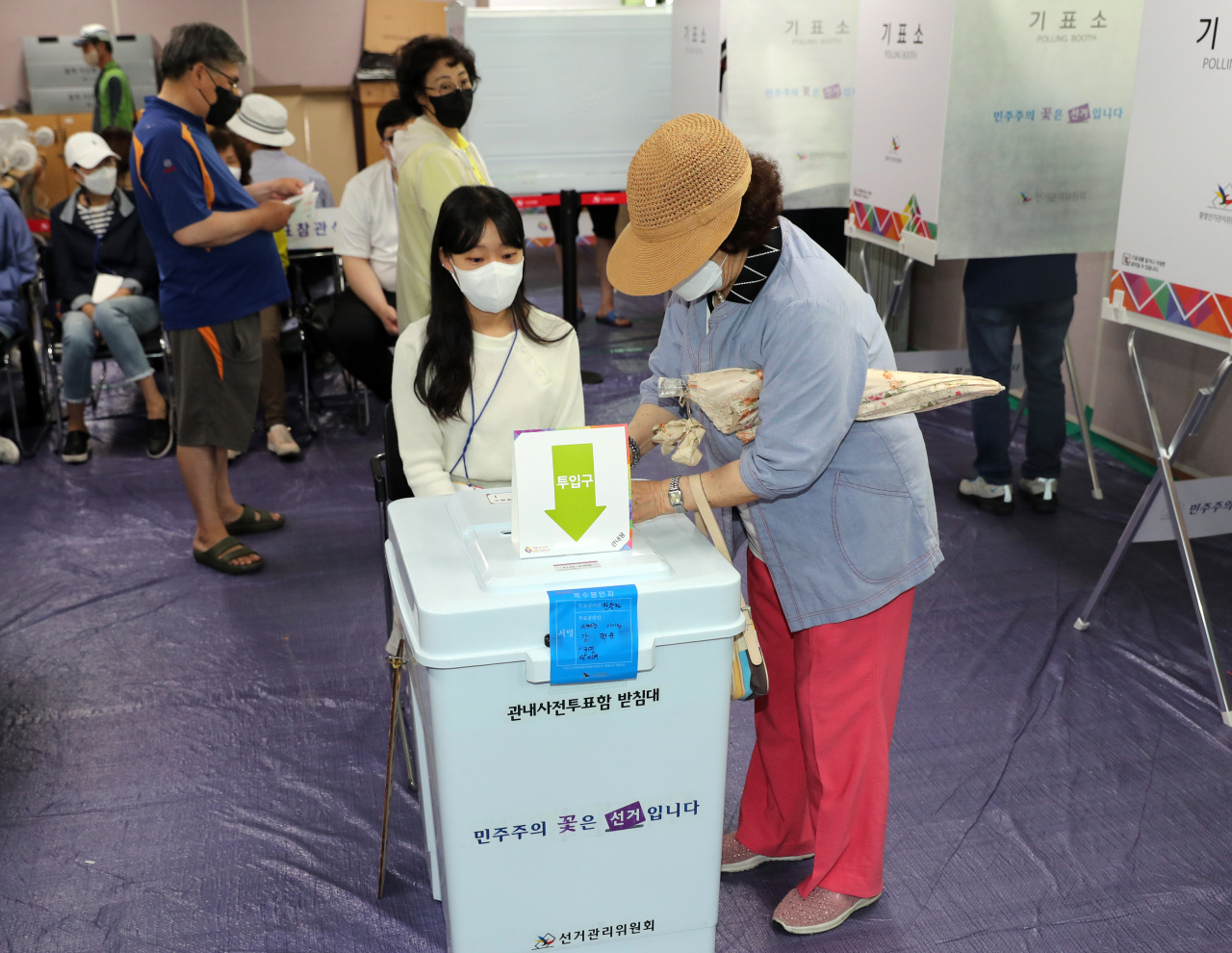 Voters cast their votes for the local elections at a polling booth set up in Incheon, Gyeonggi Province, Saturday. (Yonhap)
South Koreans headed to the polls Saturday on the second and last day of early voting for next week's nationwide local elections and parliamentary by-elections as the ruling and main opposition parties made last-minute pitches for support.

The first-day turnout reached 10.18 percent, which was higher than 8.77 percent in the 2018 local elections. Of the 44.3 million eligible voters, 4.5 million cast their ballots on Friday, according to the National Election Commission (NEC).

COVID-19 patients and those in quarantine can participate in early voting from 6:30 pm. to 8 p.m. Saturday, after the regular voting hours between 6 a.m. to 6 p.m.  Up for grabs are 17 metropolitan mayors and provincial governors, 226 lower-level council heads, as well as 779 seats in

provincial and metropolitan councils and 2,602 in lower-level local councils.  This year's elections have drawn greater attention as seven

National Assembly seats are also at stake, with political heavyweights, such as former presidential candidates Lee Jae-myung and Ahn Cheol-soo, throwing their hats into the ring.

Both the ruling People Power Party (PPP) and the main opposition Democratic Party (DP) have been encouraging people to participate in early voting, claiming that high early voting turnout can ensure victory in the June 1 elections.

Recent polls showed the PPP taking leads in most big races, except those in the liberal Honam region, the home turf of the DP.  The conservative PPP hopes it can extend the momentum of the presidential election victory and win more than half of 17 gubernatorial and mayor posts.

The DP, which controls a majority in the National Assembly, is looking to recover from the March 9 presidential election defeat and expand its power across the nation to keep the Yoon governmentin check.

The liberal party, which scored a landslide victory in the 2018 local elections, has been promoting that most incumbent local government heads are from the party and that they should continue their jobs. (Yonhap)