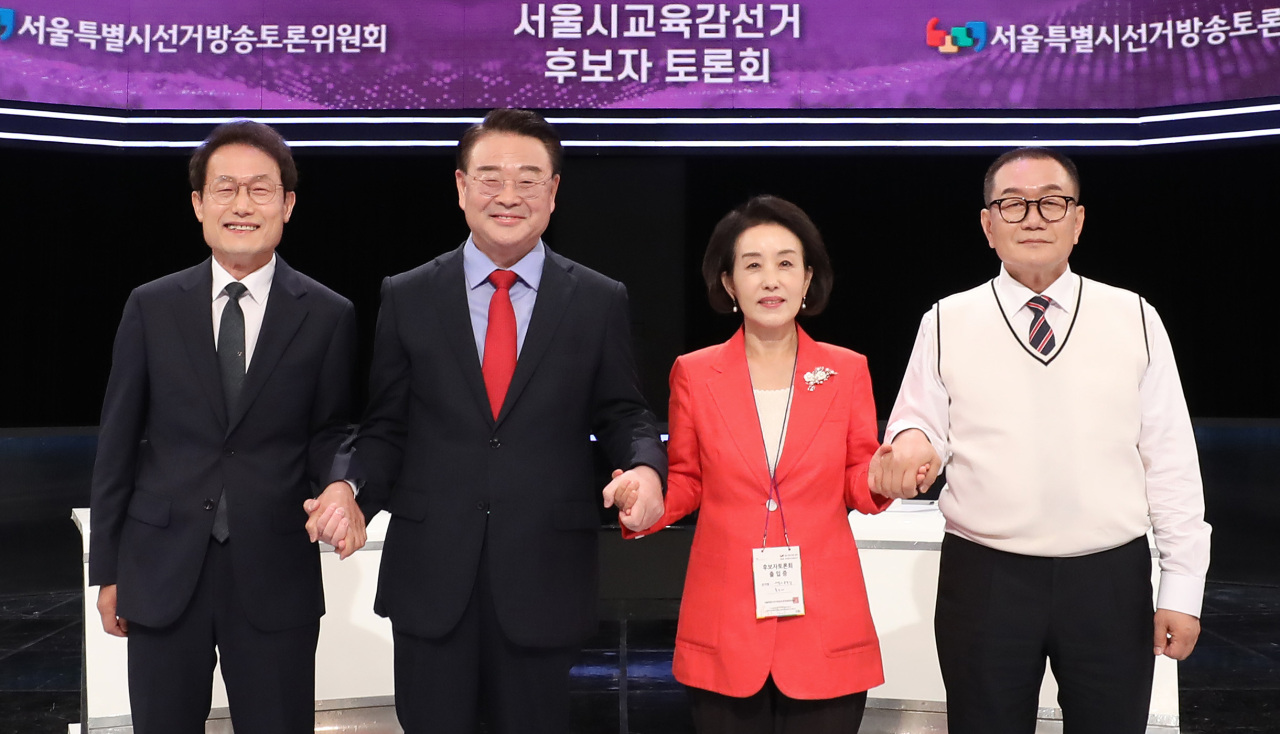 From left: Cho Hee-yeon, Cho Jun-hyuk, Park Sun-young and Cho Yeong-dal, candidates for the superintendent of education for Seoul, pose for photos before a TV debate held on May 23. (Joint Press Corps)

The outlook of the election for Seoul’s education superintendent remains blurry for the conservative bloc, as candidates have failed to form a merger while continuing to attack each other.

With less than a week left to the local elections, Cho Hee-yeon, the current superintendent of education for Seoul, and Kang Shin-man, who are considered liberal-leaning candidates, announced they have formed a merger Thursday.

“Seeing some candidates demonize and assault certain groups for the election, I had to stop the extreme-right figures from becoming a superintendent for education for Seoul,” Kang said at a press event held Thursday.

“Kang running in the election shows that there has been deficiency in my administration in the past eight years,” Cho said. “I will pave a new path, accepting the values that Kang tried to deliver.”

Though Choi Bo-seon, another candidate from the liberal bloc, said he would continue to run in the election, a merger might still be on the table, as he and Cho announced their election pledges together on Sunday.

Meanwhile, candidates from the conservative bloc have been too preoccupied with attacking each other.

Recently, a recording alleging that candidate Cho Jun-hyuk used abusive language against Park Sun-young while talking to another candidate, Cho Young-dal, was released.

Cho Jun-hyuk called Park “crazy,” claiming she would not agree to a merger, while discussing unification with Cho Young-dal.

After the tape was released, Cho Jun-hyuk officially apologized to Park for his language, but blamed Cho Yeong-dal for trying to run him down and create a political scandal.

“I have given up on a merger with candidate Cho Young-dal,” Cho Jun-hyuk said at a presser on Tuesday, adding that he cannot trust whether Cho Young-dal is a conservative-leaning candidate.

Though candidates for the superintendent post cannot showcase their political inclination, Cho Jun-hyuk has been highlighting his conservative stance, running his campaign under the slogan of “KTU Out,” referring to the Korean Teachers and Education Workers Union, often recognized as a liberal-leaning organization.

“I call for the self-reflection of the KTU as the group has ruined education so much that I have to run a campaign under such an extreme slogan,” Cho Jun-hyuk said.

On Thursday, Park claimed at a press conference that she had the backing of 108 conservative groups. Cho Jun-hyuk fired back the next day arguing that some of the groups on the list were not aware about their support for Park.