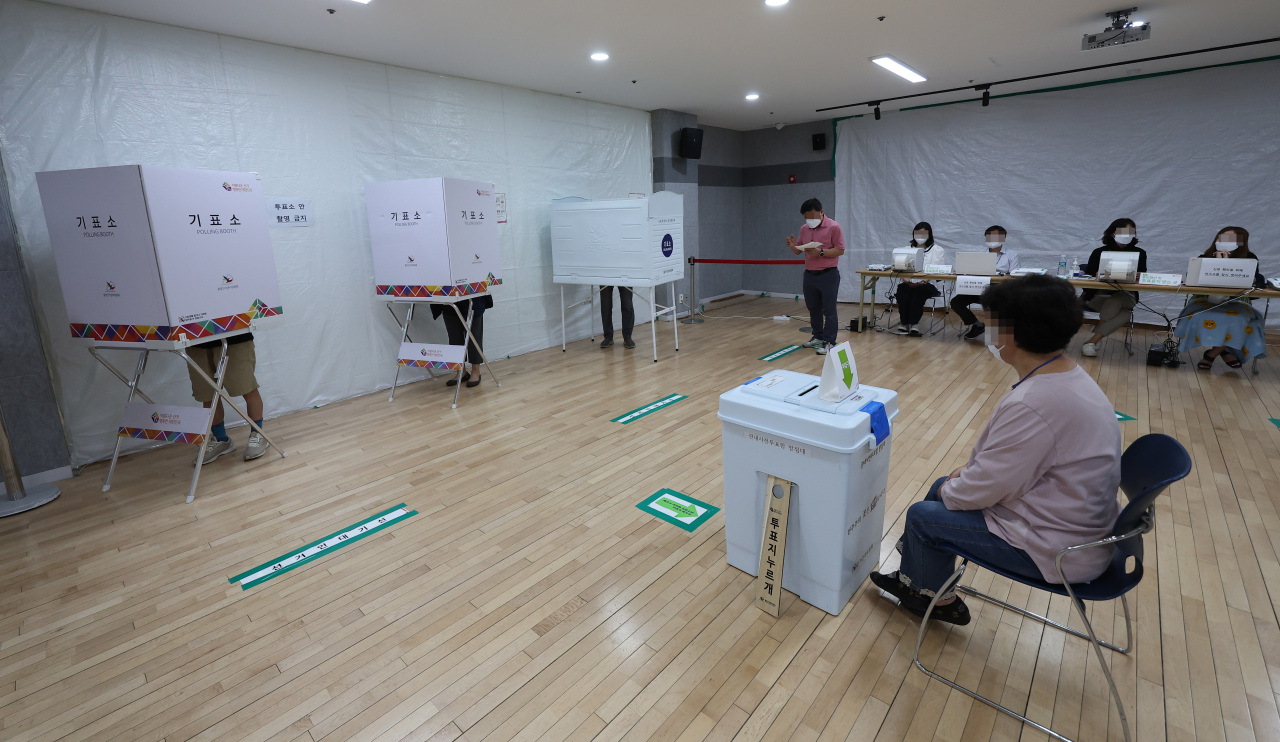 The National Election Commission on Friday opened early voting at 3,551 polling stations across the country, and voters have been rushing to nearby voting booths to cast their ballots in a fierce two-way battle between the ruling People Power Party and the main opposition Democratic Party of Korea.

Polling stations are open from 6 a.m. to 6 p.m. on Friday and Saturday. COVID-19 patients and those under self-quarantine were designated to cast their early ballots from 6:30 p.m. to 8 p.m. on Saturday. Early voters can vote anywhere they would like if they have a means of identification and wear a face mask.

Voters will be choosing 17 new metropolitan mayors and provincial governors as well as 226 other heads of local administrative units. They will also decide who will take the 3,381 seats up for grabs in the metropolitan, provincial, city, county and municipal district councils.

Eyes are centered whether South Korea can successfully carry out early voting for COVID-19 patients, as the election watchdog faced immense criticism during the early voting period for the presidential election in March for lackluster preparations to accommodate COVID-19 patients hoping to cast their votes early.

Voting booths had to run much longer than scheduled and caused trouble for thousands of voters across the country.

Voting had to close about four hours after the scheduled closing time as polling stations failed to assure swift and clear voting procedures for COVID-19 patients and those under self-quarantine who were designated an hour-long slot from 5 p.m. and 6 p.m. Saturday to cast their votes.

Both ruling and main opposition parties encouraged voters to participate in early voting, as they are aware how much each political faction can gather supporters to head to voting booths could be a decisive factor in determining the winner on June 1.

Local elections usually see much lower voter turnout than other elections, meaning both parties could be losing votes. Experts have speculated that the turnout for the 8th local elections is expected to be at least 10 percentage points lower than the rate for the 20th presidential election.

The People Power Party launched social media campaigns and ordered all of its legislators to participate in early voting. The Democratic Party did not make any official orders to its members but encouraged its supporters to lend support for itself through early voting.

People Power Party Chairman Lee Jun-seok was scheduled to cast his vote early at a polling station in Gyeyang-gu of Incheon. The move was seen as a means to lend support to the party’s flagbearer Yoon Hyeong-seon in a parliamentary by-election for a constituency there.

Yoon is competing against Lee Jae-myung, former presidential candidate of the Democratic Party who is seen to be working to enter central politics by winning the legislative seat and possibly bid again for presidency in 2027.

Rep. Kweon Seong-dong, floor leader of the People Power Party, was scheduled to cast his vote at a polling station in Wonju, Gangwon Province, to show support for Kim Jin-tae, the party’s official nominee for the Gangwon Province gubernatorial election.

He was seen to be leading in the race against Lee Kwang-jae of the Democratic Party.

Rep. Yun Ho-jung, chair of the emergency steering committee for the Democratic Party, was scheduled to cast his vote Friday morning at a polling station in Cheongju, North Chungcheong Province. Yun was seen to have cast his ballot there to lend support for Noh Young-min, the liberal party’s flagbearer for the gubernatorial election there

Noh was seen to be falling behind Kim Young-hwan of the People Power Party in opinion surveys.

Park Ji-hyun, co-chair for the main opposition party’s emergency steering committee, cast her ballot Friday morning at a polling station in Gyeonggi Province where the party’s Kim Dong-yeon is running in the gubernatorial election. Kim is currently in a tight race against Kim Eun-hye of the People Power Party.