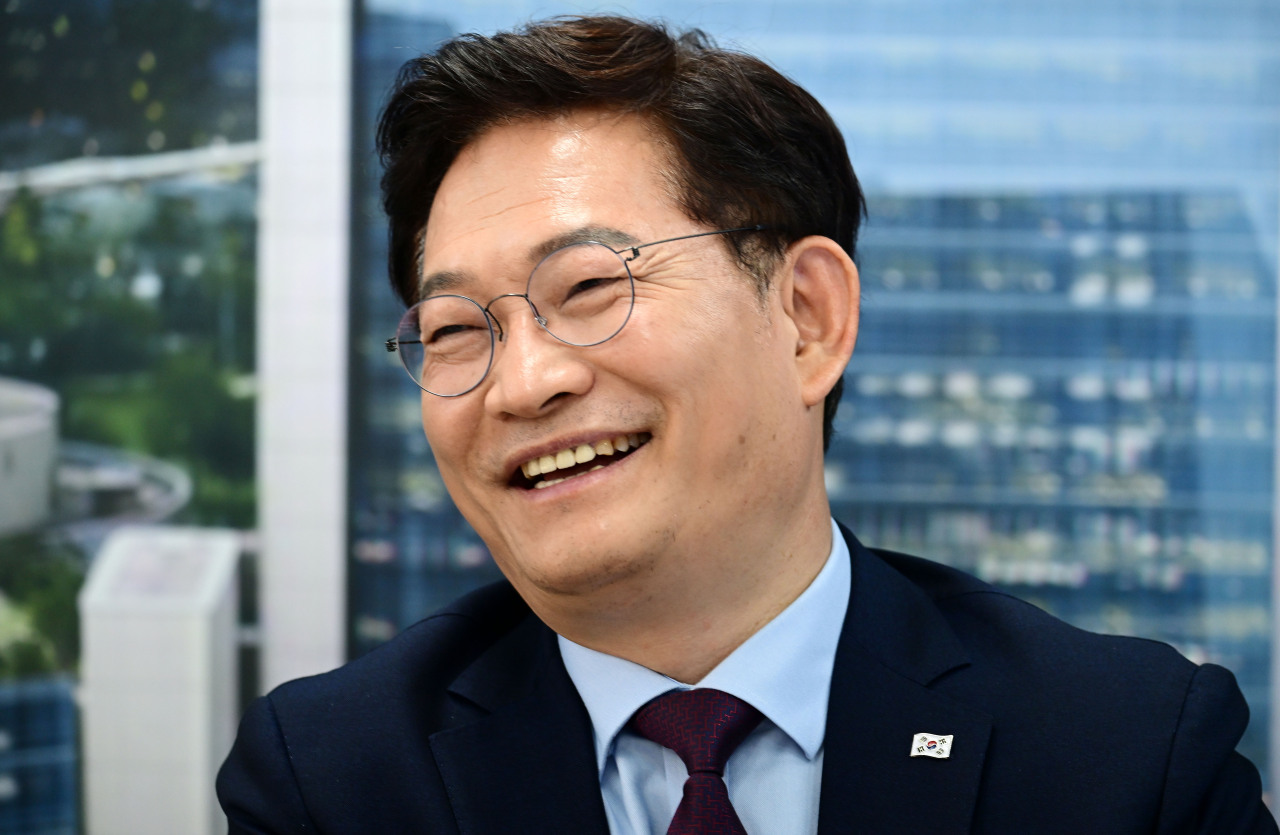 Democratic Party of Korea’s Seoul mayoral candidate Song Young-gil (The Korea Herald)
In the aftermath of a divisive race that put a conservative back into presidency, the Democratic Party of Korea’s candidate for mayor of Seoul, Song Young-gil, said he would serve as “a voice for the other half.” On June 1, Koreans head to polls for elections to pick municipal heads and fill vacant parliament seats.

“0.73 percent. That’s how thin the margin was,” he said as he sat down for an interview with The Korea Herald on Tuesday at his office in Yeouido, Seoul. At the end of a polarizing race in March, Yoon Suk-yeol of the People Power Party won 48.56 percent of the votes over his Democratic Party opponent Lee Jae-myung’s 47.83 percent.

From bridging the division within the country to “playing the middleman” in relations with Korea’s difficult neighbors, the role Song envisions for himself is vast in scope. He said he believes the Yoon administration would “benefit from having a Democratic Party mayor in Seoul.”

“Traditionally Seoul has been helmed by the opposition. Checks and balances is one of the main functions of a Seoul mayor,” he said.

The statement is only partially true, with past conservative and liberal Seoul mayors’ terms having overlapped with presidents with shared political leanings.

Though Yoon has promised to build a “country of unity,” the president’s first month suggested “anything but,” according to Song.

“Our president was humiliated at the Biden summit news conference. Clearly it didn’t bother him to give so few women roles in his administration, until he was called out at an international stage. He put together a Cabinet full of men who are a lot like himself. Think about the consequences this lack of diversity could have on policies.”

Song said he “fully supports” offering COVID-19 support to North Korea. “But in this climate North Korea isn’t going to accept any help from our government,” he argued.

He said as mayor of the capital city, he could “soften the hawkish tone” of the administration in power, and create a channel for providing humanitarian assistance to the North.

As a municipality, Seoul is capable of pursuing humanitarian initiatives for North Korea -- something the late mayor, Park Won-soon, had attempted two years ago in the first few months of the pandemic.

In 2010, under another conservative Lee Myung-bak administration, Song, who was at the time aligned with the opposition as mayor of Incheon, had sought to deliver food and clothing for North Korean newborns and their mothers. He had worked with Lee’s Unification Ministry for the support efforts.

On the first summit with US President Joe Biden over the weekend, Song worried that possible outcomes could include worsening relations with China, as well as North Korea.

“We need to ask ourselves, what did Korea gain from this meeting?” he posed.

“The discussions on Taiwan Strait, expanding joint military exercises are sensitive issues that will create tensions in our relations with China, our key trade partner,” he said. “This could lead to trade retaliations from China.”

Song labeled himself as someone “who can play the middle ground” in relations with North Korea, China and Russia as the conservative administration takes a rigid stance.

“This is where I believe I could prove to be an asset to Yoon’s government.”He was also critical of Biden’s endorsement of Japan on the UN Security Council on Monday, calling it “an extremely US-centric gesture.”

“Japan has not owned up to atrocities committed by Imperial Japan during World War II in the same way Germany has,” he said.

In the polls, Song is consistently behind his rival, Mayor Oh Se-hun of the ruling People Power Party, who is running for his fourth term.

Song said he believes the Democratic Party is beginning to regain the support of younger Koreans, the loss of whose votes were decisive in the defeat. He acknowledged the drop in support among young voters without addressing Park, the last Democratic Party mayor, who died in an apparent suicide before he could face the sexual misconduct claims at court.

Instead he said the housing scandal is what cost the Democratic Party the mayoral by-election last year.

“That’s why we lost Seoul. Moon’s staff and our own party’s lawmaker were caught doing with their properties what the administration was saying homeowners shouldn’t do. Voters had turned against us then, and then again at the presidential election.”

He said the party heard voters’ message loud and clear in the last two elections.

“It’s time to elect someone with solutions into office.”