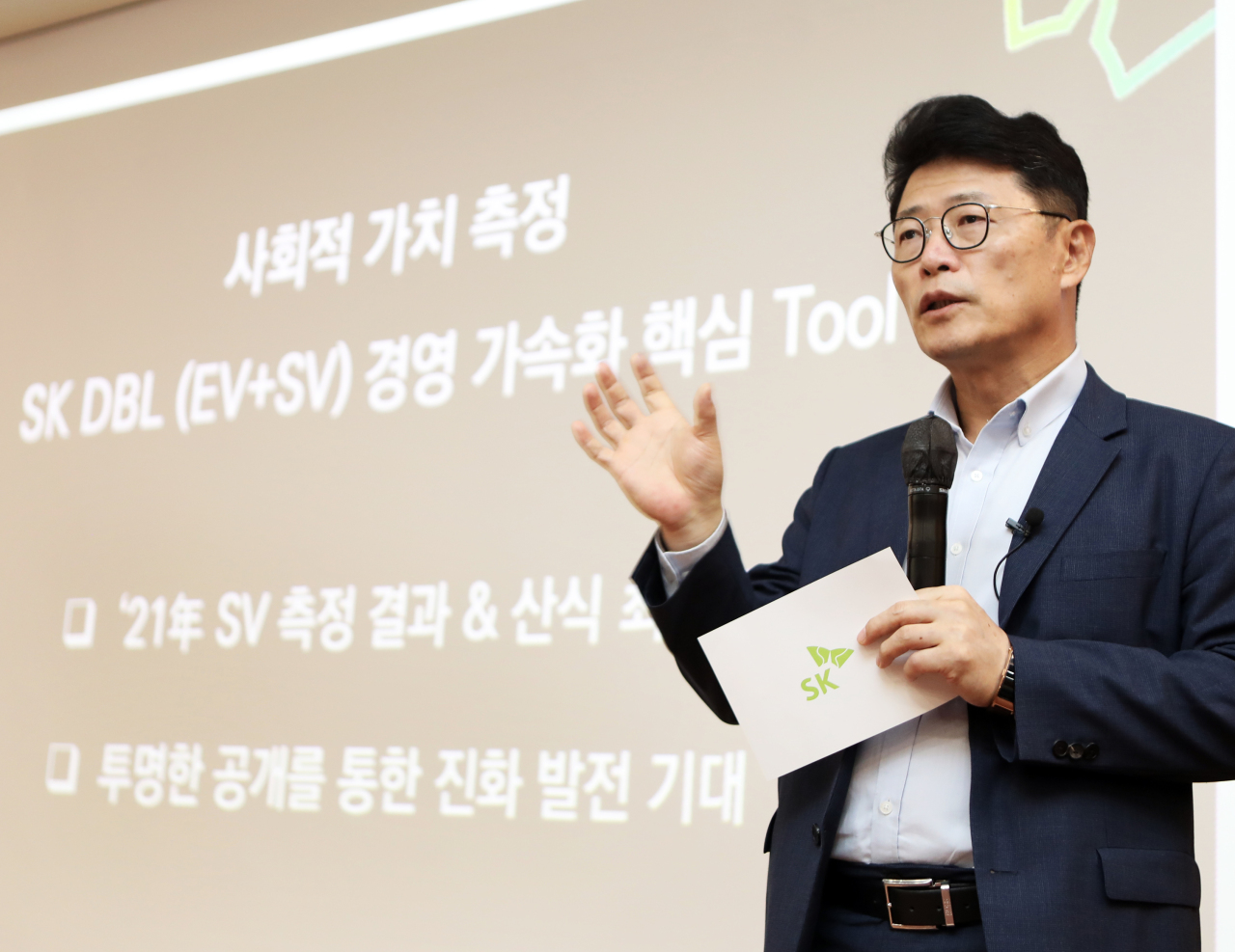 Lee Hyung-hee, chairman of the Social Value Committee at SK Group, speaks at a press briefing held at the group‘s headquarters in Seoul Monday. (SK Group)
SK Group, South Korea‘s second-largest conglomerate by assets, disclosed Monday actions to create social value and tools to measure how much impact it has generated through 2021 in numbers.

The group with its subsidiaries contributed 18.4 trillion won ($14.5 billion) to issues such as unemployment, climate change, phone scams, blood shortages, car accidents due to drowsy driving, among others. The figure rose 60 percent from that of 2020, its estimate showed. SK had nearly 190 affiliates within the group as of April.

Under the formula suggested by the group, the social value that a single SK Group affiliate created will depend on whether the outcome of the social impact exceeds or falls short of market average of peer products or services, if applicable, provided by a third party or the company itself. This means the figure may go below zero if the annual outcome was smaller than the market average.

Then the figure will be multiplied by variables, such as the “proxy” index value provided by a third party entity to convert the social value into monetary terms, as well as the level of contribution by the SK affiliate to creating the social value unless SK affiliate is the only participant in the field.

For example, in order to calculate the social value created by preventing vishing attack while using a set of technologies by SK Telecom, a telecom carrier affiliate, SK will measure whether SK Telecom’s technology outpaced that of the average of all telco firms in preventing crime, how much it cost for a victim has to pay when he or she falls prey to the crime, and the level of contribution by SK Telecom.

Transparency is key to enhancing the sustainability momentum, executives told reporters on Monday.

“We’ve decided to disclose it to satisfy the curiosity of stakeholders about social value creation and turning them into monetary values, and at the same time to help them actively use social value information for investment and consumption,” said Lee Hyung-hee, chairman of the Social Value Committee at SK Group.

Lee added that it plans to hone the measurement system with various international partners such as the Value Balancing Alliance, Harvard Business School, and the Assets Supervision and Administration Commission of the State Council of China.

SK Group has disclosed the figures with regards to social value since 2019, beginning with the 2018 performance, but previously the group did not reveal the methodology behind the figures.

This is the latest move for SK Group, led by Chairman Chey Tae-won, to align itself with the pledge to pursue sustainability in its businesses ranging from semiconductors to batteries, chemicals, biotechnology and telecommunication.