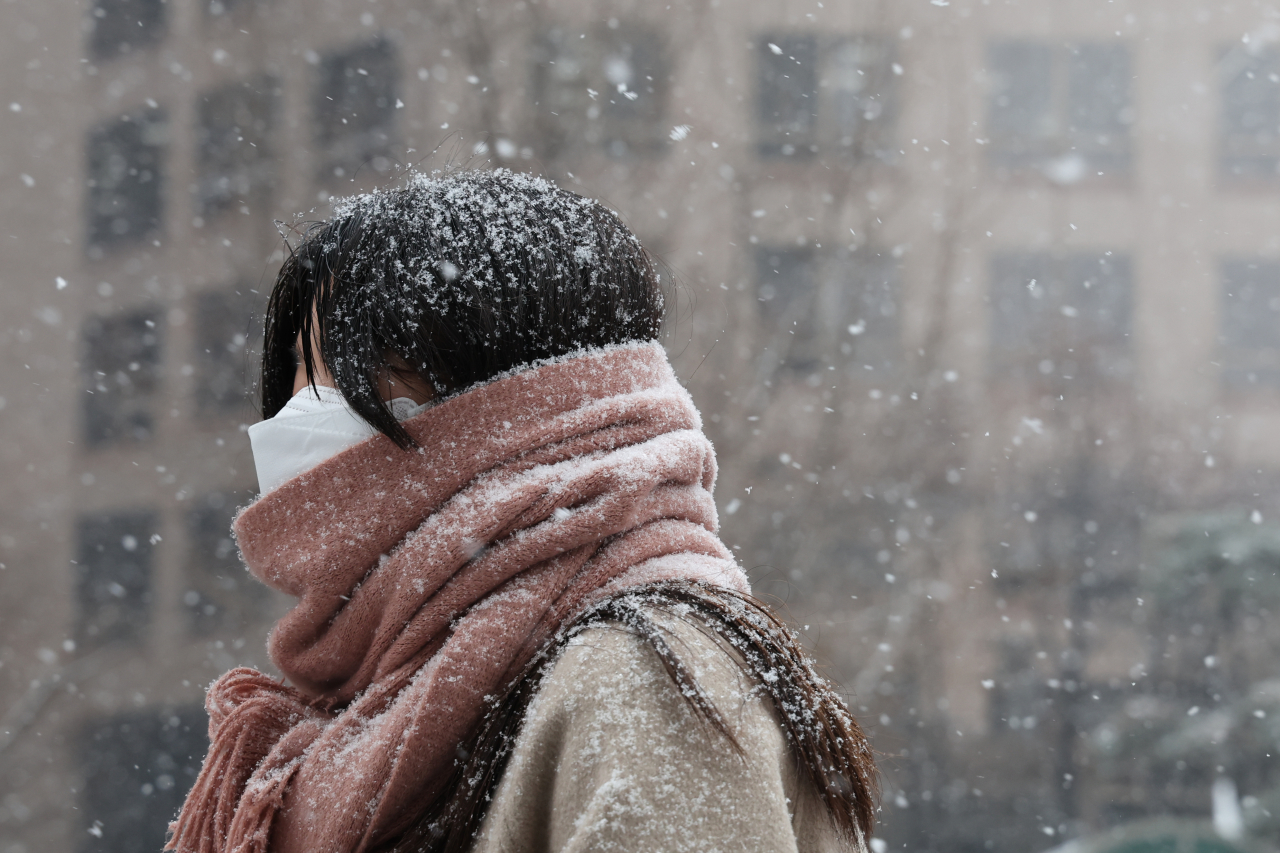 A woman walks pass by Cheonggye Plaza in central Seoul on Wednesday morning, when a heavy snow advisory was issued for the entire area of ​​Seoul. (Yonhap)
Heavy show fell in Seoul, Gyeonggi and Gangwon provinces on Wednesday, prompting authorities to issue alerts over potential traffic disturbances and frozen roads.

According to the Korea Meteorological Administration, Seoul received 3.5 centimeters of snow while Gangwon Province‘s Seoraksan and the southeastern Ulleung Island saw heavy snow of 18.5 centimeters and 19.5 centimeters, respectively, as of 2 p.m.

The weather agency lifted a heavy snow alert, which indicates that snow of at least 5 centimeters in 24 hours, for Seoul, Incheon and Gyeonggi Province in the afternoon, saying that it only expected an additional 1 centimeter of snow by 6 p.m.

The Seoul Metropolitan government dispatched some 9,000 workers and 1,200 snow-removal cars and other equipment to major roads to prepare to remove the snow. Authorities used over 2,500 tons of de-icing agents to melt the snow on Seoul’s roads.

To prevent potential traffic disturbance during the evening rush hour, more buses and subway trains have also been allocated.

With daytime temperatures in Seoul and the surrounding areas staying at minus 1 degree Celsius, authorities urged drivers to be cautious while driving in adverse weather.

“I hope drivers pay special attention to traffic safety and pedestrian safety in snowy weather as visibility is short and there are many slippery places such as icy roads and bridges,” an Incheon Metropolitan City official said.

In the late afternoon, the snow will further spread to the southern regions, including the southwestern Jeolla Provinces and the inland areas of the southeastern Gyeongsang Provinces.

Some parts of southern Jeju Island. Gangwon Province, the southeastern Ulleung Island and the easternmost islets of Dokdo were expected to receive up to 20 centimeters of snow by Thursday afternoon.