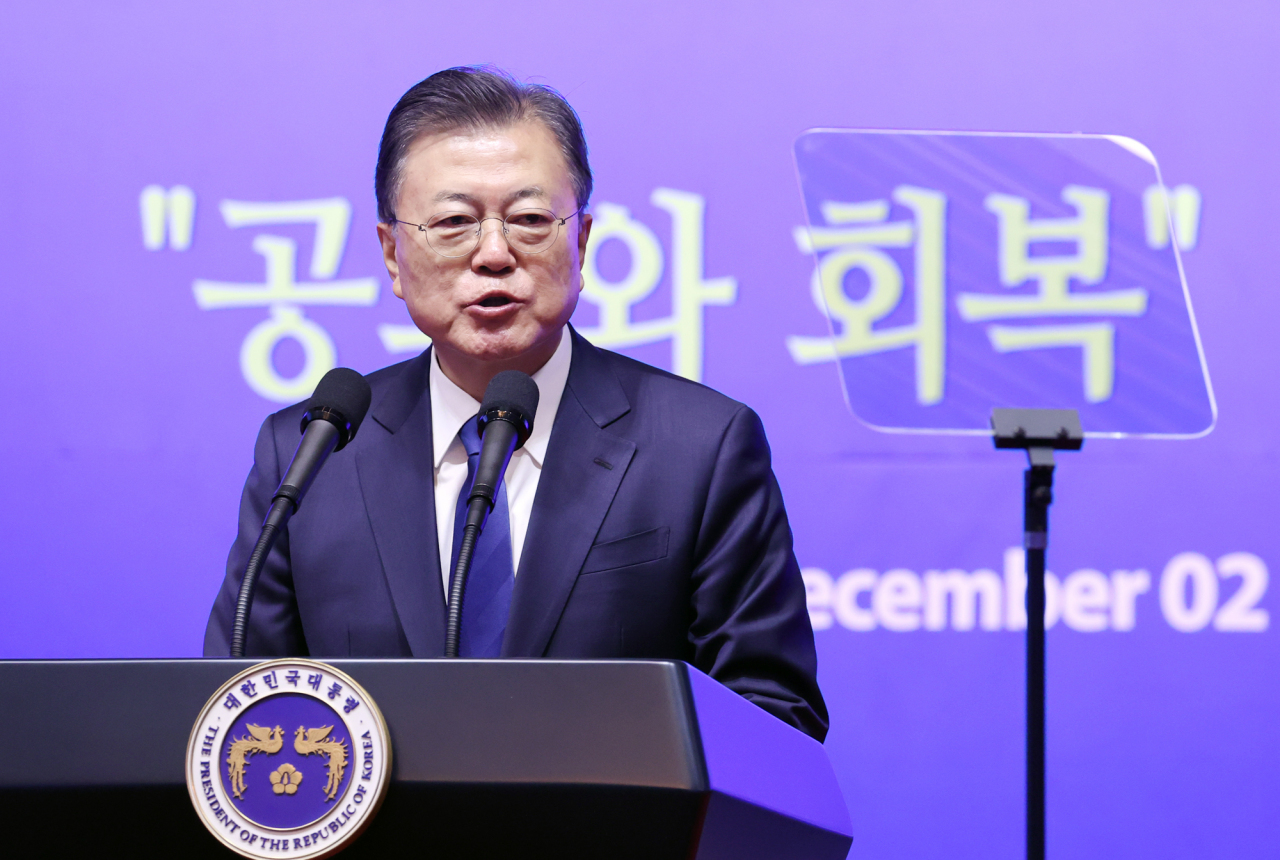 President Moon Jae-in reiterated Thursday his administration is committed to bringing normal life back to Koreans amid a record surge in cases and hospitalizations. (Yonhap)

Korea’s three-month plan for exiting pandemic restrictions is being threatened by a record surge in infections and the likely community spread of the omicron variant.

On Thursday, Korea’s new cases reach a new record high of 5,266 -- topping 5,000 for the second day in a row -- while intensive care beds for COVID-19 patients at Seoul hospitals were more than 90 percent full.

For the past month since the country abandoned the majority of its mitigation efforts in line with a new strategy dubbed “living with COVID-19,” intensive care hospitalizations have more than doubled. In November, 29 people died of COVID-19 per day on average -- much higher than the previous month’s average of 12 daily deaths.

Then on Wednesday, evening disease control authorities announced they have found the country’s first cases of the omicron variant in travelers who recently returned from Nigeria, and one of their contacts. It’s likely that omicron has already spread in communities, authorities said, as some of the patients found to have omicron were exempted from quarantine before testing positive.

Amid the ever-worsening surge, the verdict from President Moon Jae-in himself and top authorities remains that Korea will continue to commit to restoring normal life.

Moon reiterated Thursday his administration would be mobilizing an “all-encompassing effort” to return to life without restrictions. He said the emergence of omicron as a new threat was “the final obstacle” facing Korea in its progress toward normal.

Earlier this week, Moon said in a government meeting for the COVID-19 response that “there can be no turning back” in Korea’s journey back to normal.

“Daily infections, hospitalizations, deaths are all on the rise,” he said. “But reversing reopening and regressing to the past is not an option.”

Son Young-rae, spokesperson for the Ministry of Health and Welfare, denied during Thursday’s closed-door briefing that there were plans in the works for reimposing social distancing and other curbs that were scrapped a month prior.

But the administration’s relentless pursuit of ending COVID-19 restrictions over the winter months is facing growing backlash from front-line health care workers.

Dr. Lee Jacob, an infectious disease specialist at Hallym University Sacred Heart Hospital, said in a statement posted to Facebook on Wednesday that without taking the necessary action Cheong Wa Dae was “leaving it up to health care workers to handle the surge.”

Initially an intensive care bed occupancy rate of 75 percent had been set as the threshold for halting the reopening and activating an emergency response. Despite passing that limit last week, the government on Monday decided against reintroducing social distancing.

Lee said overwhelmed health care workers may start to “give up” amid a spiraling crisis, if steps to stem the surge are not taken.

Lee, who has advised the government on its disease control policies since the early days of the pandemic, then called on Cheong Wa Dae to “demonstrate some will to contain the situation.” “It doesn’t seem like Cheong Wa Dae is treating the state of the outbreak seriously enough,” he said.

On the president calling pausing return to normal plans a “regression to the past,” infectious disease specialist Dr. Kim Woo-joo of Korea University Medical Center said, “Protecting the safety and the lives of the people is no regression at all.”

“Our leaders are obligated to make decisions that can save the most lives,” he said in a phone call.

Kim also pointed out that Monday’s announcements on the COVID-19 response from the government involved “no measures whatsoever about slowing the spread,” while “indiscriminately subjecting COVID-19 patients of all ages to recover from home to turn around the bed shortages.”

Intensive care unit doctors at some of the top hospitals said in an emergency press conference Wednesday that Korea was nearing the point of having to triage patients. The unprecedented surge in cases has crowded hospitals to their limits, and not all patients could be guaranteed a bed.

Meanwhile, after identifying five cases of omicron Wednesday, Korea is implementing stricter controls at its borders. All arrivals will be required to quarantine for 10 days regardless of their vaccination status, and samples for cases of infection will be sent for genomic sequencing.

Dozens of people who have come into close contact with omicron patients are still being investigated.

Dr. Paik Soon-young, an emeritus professor of microbiology at Catholic University of Korea, said, “Taking preemptive steps was only wise until we better understand the new variant, such as its transmissibility or ability to cause more severe disease than previously circulating variants.”