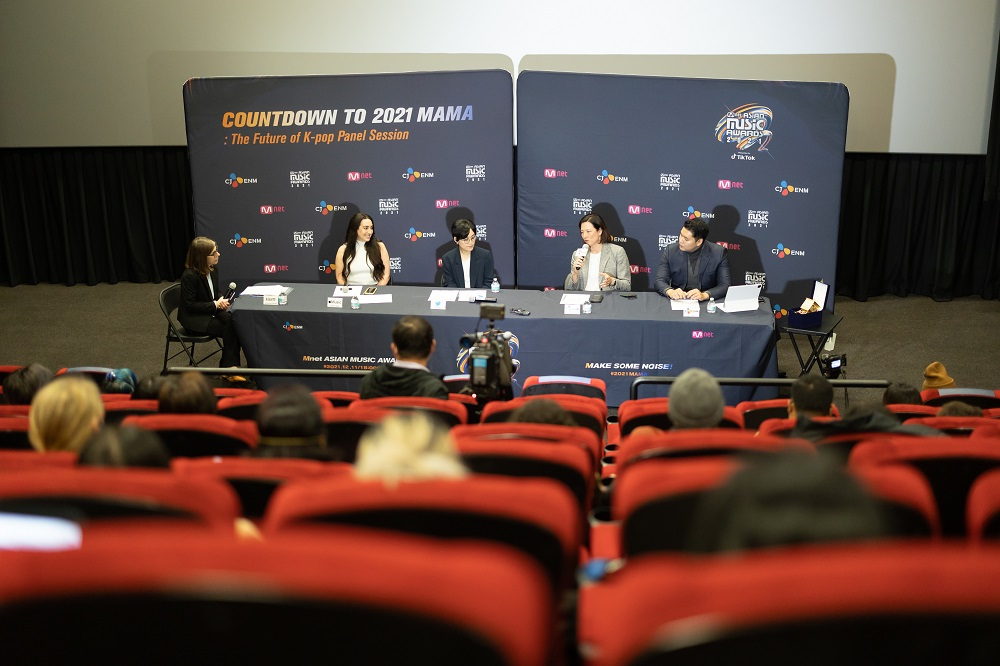 “K-pop is just coming. It hasn’t even hit the ceiling. Bands like BTS are making groundbreaking moments here, getting nominated to award shows like the Grammys, and what will follow after the doors they have opened, we have no idea,” Reese, the host of Chart Show on Apple Music Radio, said.

The forum comes after CJ ENM announced a plan to venture into the US, starting with taking its annual K-pop award show there.

CJ ENM’s director of live entertainment business, Don Kim, said during a Seoul press conference on Nov. 17, that “we plan penetrate into more unchartered global locations, including the world’s number one music market, the US.”

Hong, the director of CJ ENM’s US music business, reiterated the company’s new vision, stating, “MAMA is an award show, but it’s really celebration of music, a celebration of K-pop music.”

Hong said they are looking forward to bringing it to the US as a “gift” to fans.

“At this award show, we have around 30 to 40 K-pop acts appearing and this is a real celebration ceremony of an annual K-pop here where all creative people come together to bring out the best production quality,” he said.

Killoren, of CJ ENM, said KCON, a major annual K-pop and Korean culture festival hosted by the company, is proof that Hallyu is constantly evolving.

“When KCON first started in 2012, a lot of people were saying K-pop is over. It’s already been big. We’ve been here before,” Killoren said.

“You used to have gatekeepers which were the major media companies, and the power of fans and the social media got rid of the gatekeepers and now everybody can access the content they want from wherever and start their own journey of discovery.”

She went onto say, “There is a constant renewal inside the K-pop. It’s really indicative of the world we live in now, also the potential of all types of contents going forward.”

Companies like CJ ENM keep highlighting and focusing on rookies and younger groups because there are always new bands and artists worth discovering, she added.

On the outlook for K-pop’s future in the global market, Killoren said, “K-pop, compared to a lot of other genres, still has not had as much of those distribution points, and I think those are increasing now. You see merchandise opportunities, or sponsorships, collaborations like the one McDonalds and BTS did.”

The panel also picked fan experience, and their engagement with their artists as what makes K-pop special and what the entertainment company believes is the key element in promoting K-pop contents globally.

“Fans always like to be connected with the fans, and be updated with what is going on exactly at the moment,” said Kim of Twitter. Taking the example of K-pop sensation BTS’ recent in-person concerts in the area, “The artists shared their feelings to the fans through Twitter, and the fans also shared them to other fans, because not all the fans were able to be there.”

What sets K-pop apart from other genres, have much to do with their strong bond between them and their fans, the panelists said.

“K-pop groups come out of some of the most arduous training system, and people know that. K-pop artists are some of the most hardworking artists, and I think that’s the bond,” Killoren said. “There’s a kind of mutual admiration ... It’s different than what happens in almost any other genres or creativity which is just about the idea. And I think that’s where the warmth in K-pop comes from.”

Reese, the radio host, who has interviewed numerous big names in K-pop, including BTS, agreed.

“K-pop groups are so much about their fandom. Every time I talk to them or interview one of them, it’s so much about the people who get behind them every day. I feel it’s very much about the fans who are the driving force for the group, because they want to give them the best that they can do,” Reese said.

“I think there’s nothing quite like the K-pop music. I talk about this always,” the radio personality said, adding, “There is something magical that happens when all of these people get together in the groups to make music.”

“The most important thing is the fans. We carefully monitor what fans like and want more,” Hong stressed. “I flew to LA two days ago, and I see some things amazing. I walk into coffee shops, and I hear K-pop music playing. I walk around the street and there’s people dancing to K-pop. I think it’s just a beginning. We see a brighter, bigger picture.”

He added, “People think we create we create great K-pop, K-dramas, K-films, but we’re just trying to make great content, in our own way. Even the barriers of ‘what is K-pop’ is I think it’s unclear.”

The event also included a screening of a video on the history of MAMA.

CJ ENM is holding MAMA in person for the first time in two years since the outbreak of the COVID-19 pandemic. The award show will take place on Dec. 11 at the CJ ENM Content Studio in Paju, Gyeonggi Province.