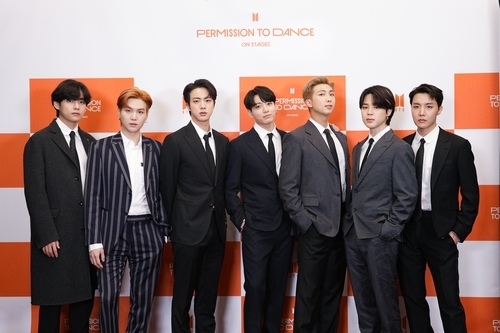 Members of the K-pop phenom BTS pose for the camera during a press conference at SoFi Stadium in Los Angeles on Wednesday, in this photo provided by its agency Big Hit Music. (Yonhap)
K-pop supergroup BTS will be unable to attend the 2021 Mnet Asian Music Awards (MAMAs) scheduled for next week as the members have to go through COVID-19 isolation upon arrival from the United States due to tightened quarantine rules.

The government decided to place all overseas arrivals under a 10-day quarantine for two weeks starting Friday, regardless of their nationalities and vaccination status, to tackle the omicron variant.

The septet is currently in Los Angeles for its first in-person concerts in two years. The group is set to return home after performing at the iHeartRadio Jingle Ball Tour, the largest year-end radio show in the United States, on Friday.

The 10-day mandatory self-quarantine will make the group unable to attend the MAMA show on Dec. 11 in person.

Mnet, the music cable channel that hosts the annual event, however, has not confirmed whether the group will attend this year's show or not, saying the matter is under discussion.