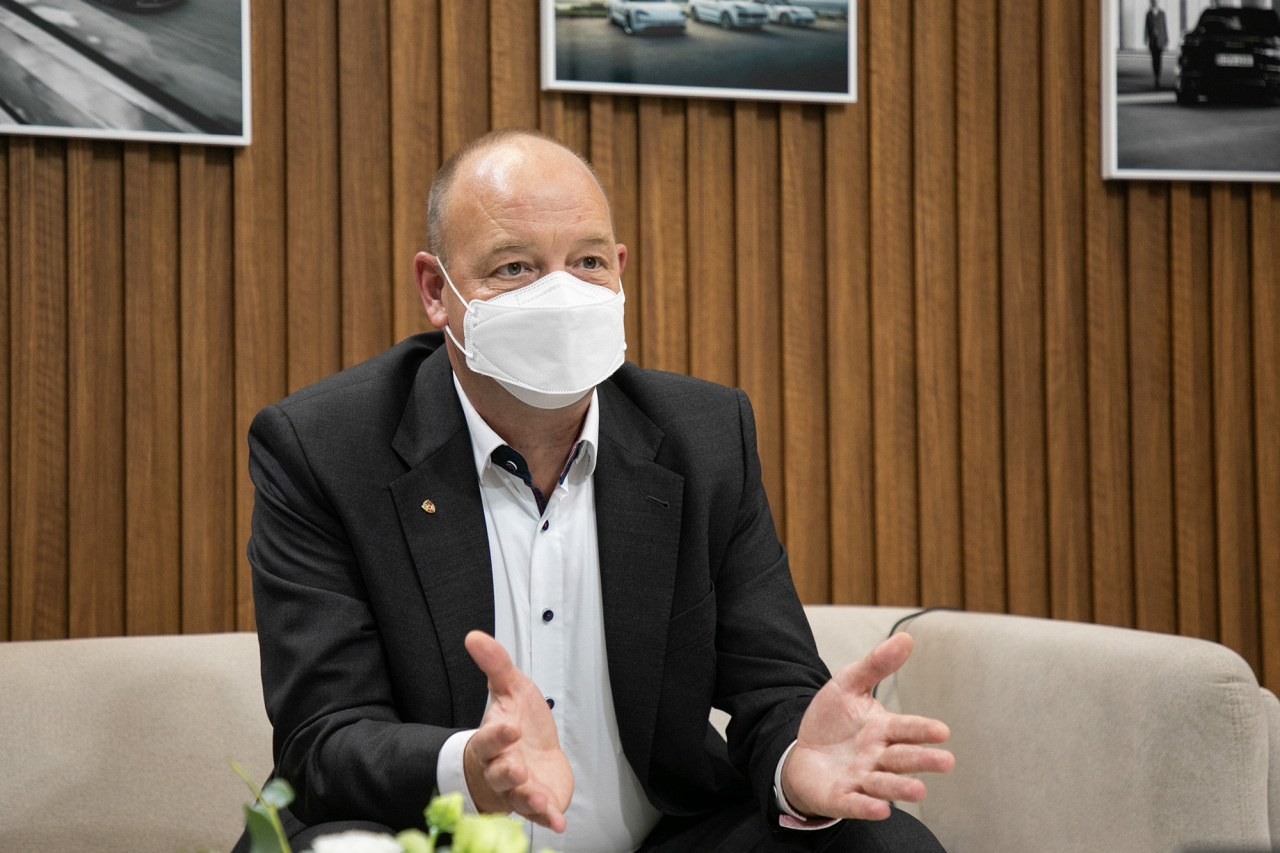 Thomas Friemuth, vice president of product line Panamera, speaks at an interview with The Korea Herald in Seoul on Thursday. (Porsche Korea)
Porsche is not ready to let go of combustion engines.

Engines are what make a Porsche a Porsche, an executive told The Korea Herald while visiting Seoul for a motor show.

And in order to keep that forte while complying with the green agenda, the German carmaker is developing eFuel, a climate-neutral fuel produced with the help of electricity from water and CO2 from the air.

“The market is full of combustion cars and they will continue to be made and driven in 2030,” said Thomas Friemuth, Porsche’s vice president of product line Panamera said in an interview. “That is why besides EVs, we are also working and focusing on what we call eFuels, a carbon neutral fuel which we can use in classical combustion engine cars even after 2030.”

The electrification of Porsche vehicles is still a big theme, as the carmaker plans to turn 80 percent of its lineup into battery-powered vehicles by 2030. But it is also focusing on developing climate-friendly fuel to keep the tradition of Porsche combustion engines.

“We are making a prototype eFuel factory that should produce the first liters of eFuel next year to show that this synthetic fuel will work on our engines, on our cars and show the world that this is also an opportunity to invest in e-fuels because this can also give a path to get the whole world CO2 neutral” he said.

Developing eFuel is part of Porsche’s effort to protect its brand identity as a racing car by balancing sustainability and traditional traits of the brand.

“We will start to test eFuel on the racetrack in our high-performance motorsports engines at the Porsche Mobil 1 Supercup next year. We can show the world that people can still enjoy racing like in the past” Friemuth explained.

If it works, the synthetic fuel would allow Porsche’s hybrid models such as the Panamera 4 E-Hybrid and their iconic model, the 911 to be driven for many years to come, which will satisfy their fans.

Even on eco-friendly cars, Porsche will differentiate itself from other luxury car brands by allowing customers customize their cars fit to their needs and by giving exclusivity.

“We try to let out customers customize their cars to let them choose the right options such as the panoramic roof system and the steering wheel system. We also make it exclusive giving extra exclusive unique look. When we talk about Porsche, it always had to do with design” he said.

He was in Seoul to stage the Asia premiere of the Panamera 4 E-Hybrid Platinum Edition, during the Seoul Mobility Show’s press show held last week.