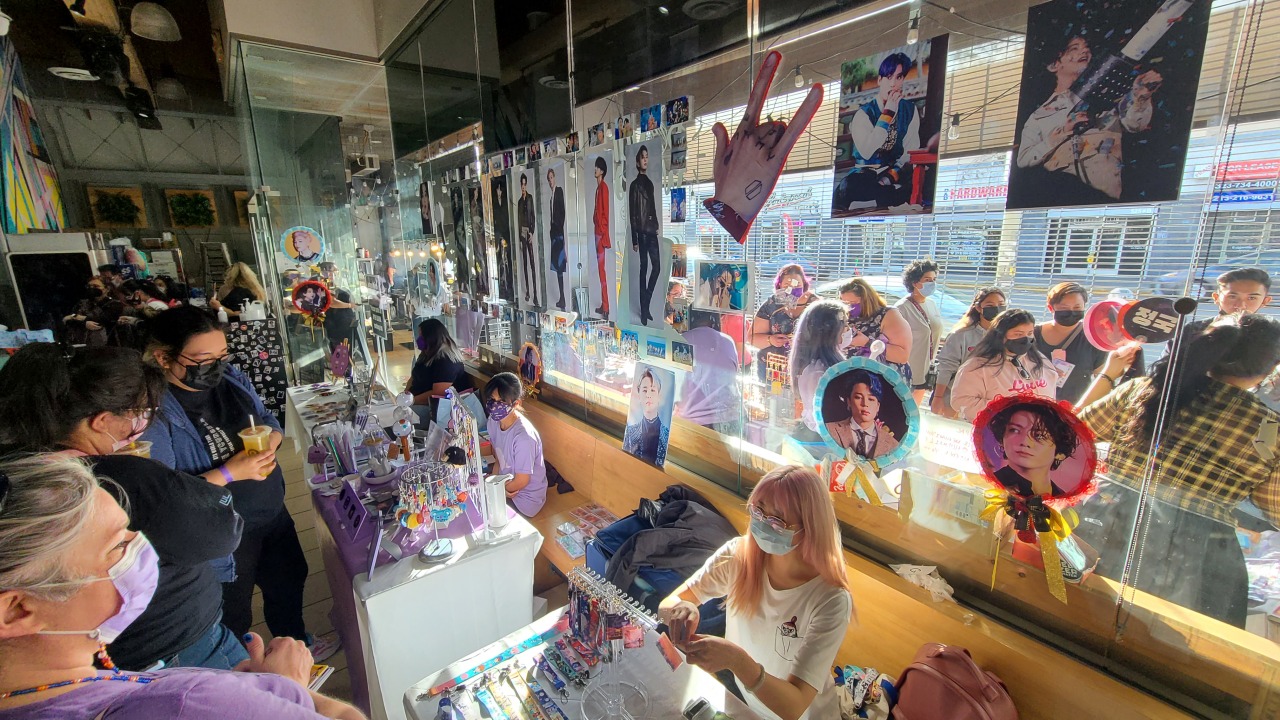 A “Permission to Dance” cup-sleeve event takes place at Dragon Boba in Koreatown, Los Angeles, Friday.
LOS ANGELES – With locals having flushed out of the city for the Thanksgiving holiday, the streets of downtown Los Angeles were empty in the days leading up to K-pop sensation BTS’ “Permission to Dance On Stage” concert series, which kicked off on Saturday.

But sure enough, a flush of purple, the group’s signature color, flooded into the city as it geared up to welcome the world‘s biggest boy band and their global fandom, Army. The hashtags “Armys have a safe flight” and “Armys in LA” trended on Twitter around the globe on Thursday, as fans shared pictures and videos of themselves setting off on long-anticipated trips on social media.

On Friday, the city was set abuzz even before the show kicked off the next day, as Hybe, the band’s label, launched the sales of official merchandise and goods fo
r the concert. With pop-up stores not happening this time, fans assembled outside the booths set up in the parking areas of SoFi Stadium, where the concert series is being held. 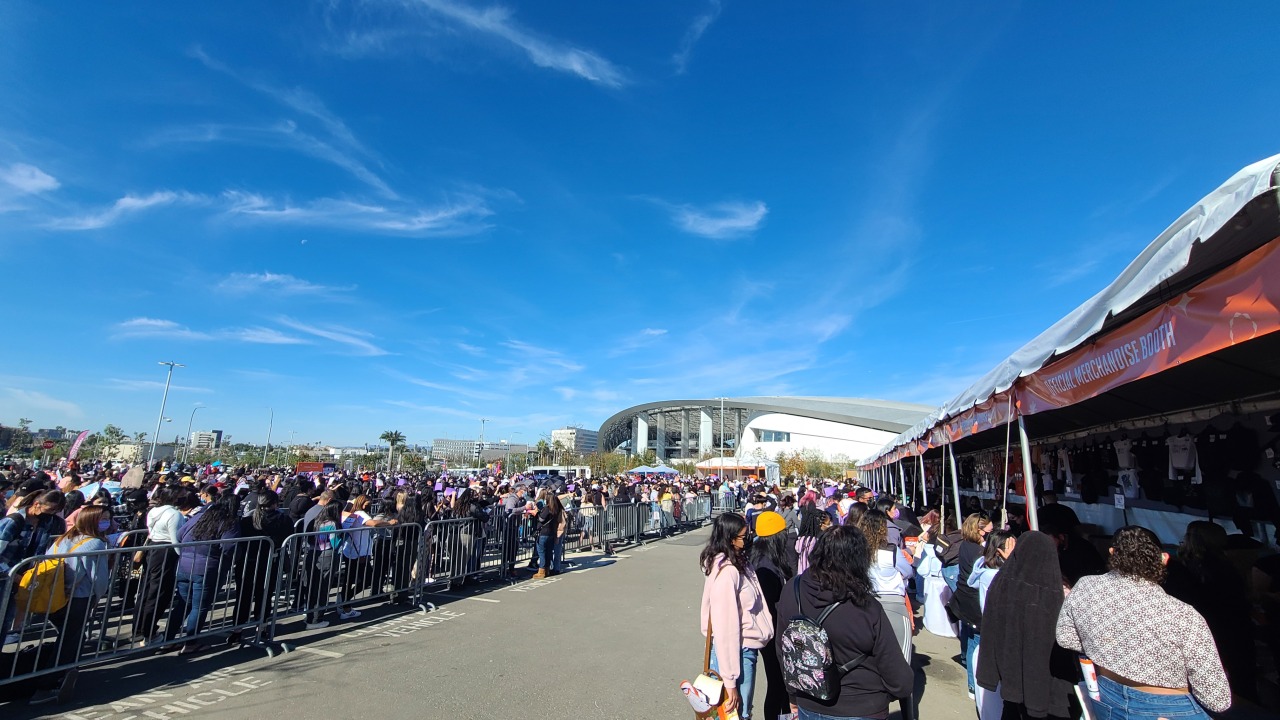 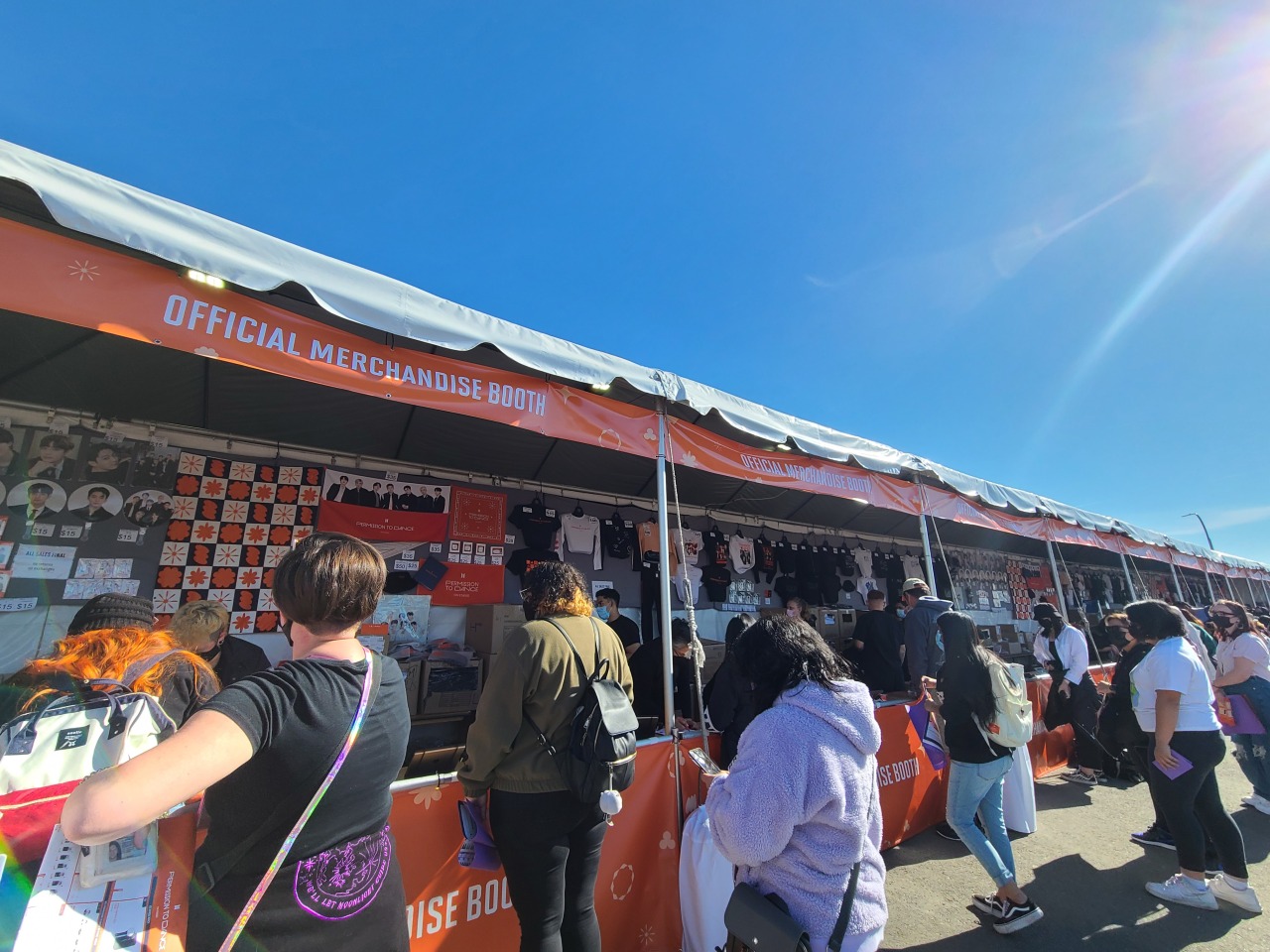 BTS fans gather at SoFi Stadium in Inglewood, California, Friday.
Lines of people waiting to buy merchandise – some exclusively sold on-site -- were already spread out over the parking zones of the 70,000-seat stadium when the doors opened at 10 a.m.

Among those in the line were Kayla Villaobos, 25, and, Erika Day, 25, friends living together in Texas, who said they expected to wait for five more hours for their turn at the booths.

One of the so-called “pandemic Armys” who were introduced into the fandom amid the coronavirus pandemic, the girls were excited to finally be at their first in-person BTS concert.

“It was the James Corden Carpool Karaoke first, then we watched the NPR Tiny Desk Concert, and then it just kind of blew up from there,” Erika said, explaining how they were introduced to the group. Kayla piped in to add, “We didn’t really intend to become fans from the start but it just came to be.” 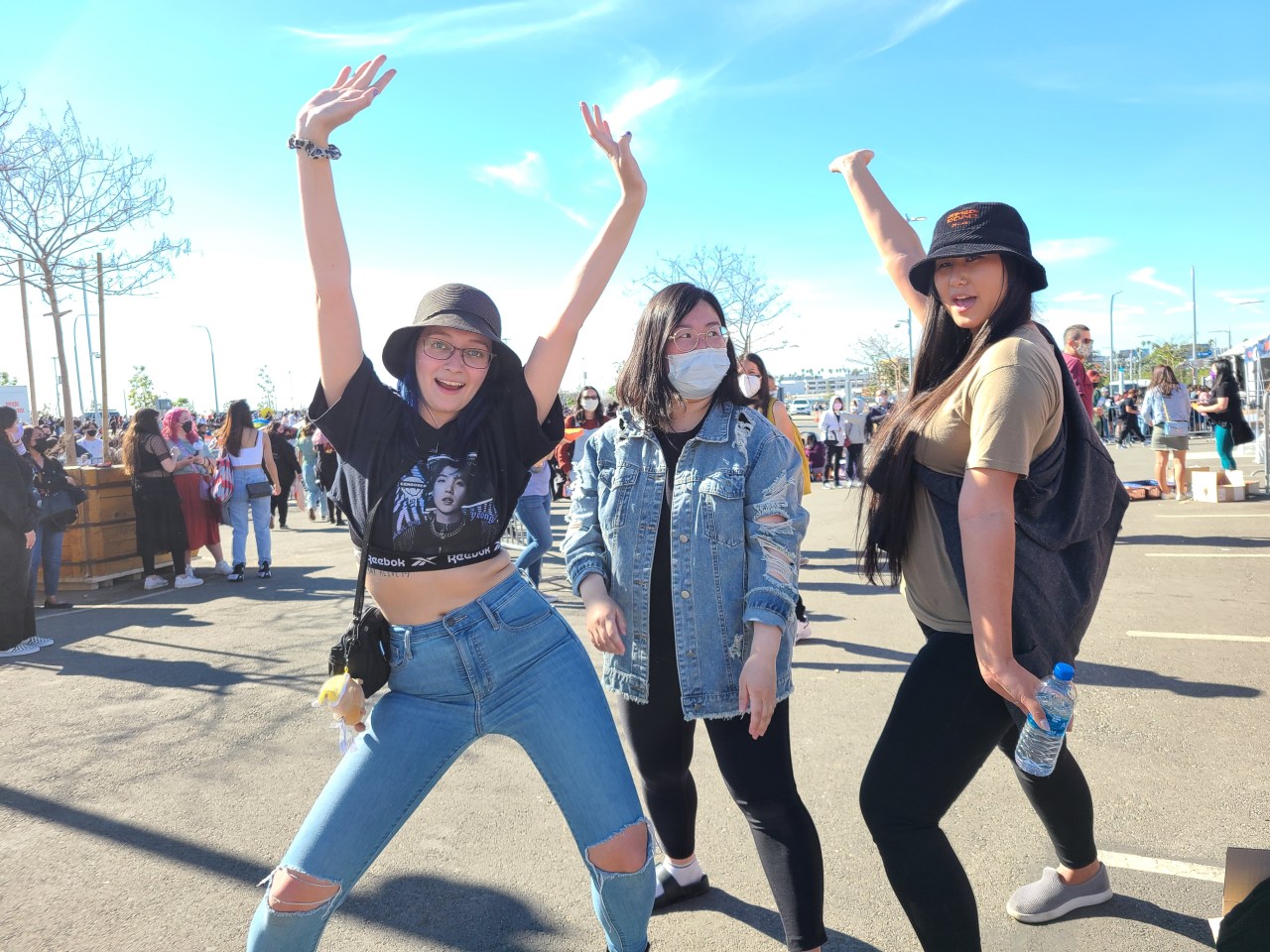 (From left) Alexa, Jess and Brita pose for a picture after buying concert merchandise at SoFi Stadium on Friday.
Brita and Alexa, 24-year-old friends from Colorado, who exited the line with a box full of merchandise, said they arrived at the parking lot at around 6:30 a.m. in the morning.

“We weren’t even the first. People were here before, about three teams. They had blankets and all,” Brita said.

“It was insane. People were sleeping on the ground,” Alㅁexa said. “But this is commitment. Go Army! Because it’s tomorrow. I’m serious, I’m going to go hype. I might pass out.”

They were together with Jess, a fellow Army they befriended as they waited in the queue that morning. While Alexa bought a dozen “Butter” CDs in order to collect a photo card of each member of the septet, Jess seemed a tad more committed, taking home fifty copies of the same album.

By around 11:00 a.m., some of the popular products were already sold out, and here and there, fans could be seen trading items, such as photo cards and albums.

“We were trading for duplicates (of cards of the members). So, whoever has whoever’s bias, ... we can complete the set,” Carol Yeh, 25, who bought 49 copies of the deluxe version of “BE” that day, said. “The albums, some are for my friends, and I might do some giveaways.”

Helping Carol, who had an injured arm, was a German Army Ann-Kathrin Leeners, 21, and Suki Gilmore, 24, from Texas, both of whom she had met that day.

Carol, who had had the tickets for the canceled “Map of the Soul” tour last year, said she was able to buy tickets earlier than others and were going to all four concerts this time.

Many of the fans were already dressed up in tints of purple and other BTS-inspired apparel. From clothes to hats, bags, masks and even shoes, it seemed like a purple garment was a must for Armys that day, while some wore handmade fashion items to show off their uniqueness.

Alexa had cropped her J-Hope shirt herself, while Cindy Arias, 29, had sewed on the word “BANGTAN” onto a lemon-yellow t-shirt to match her Korea-themed bucket hat. 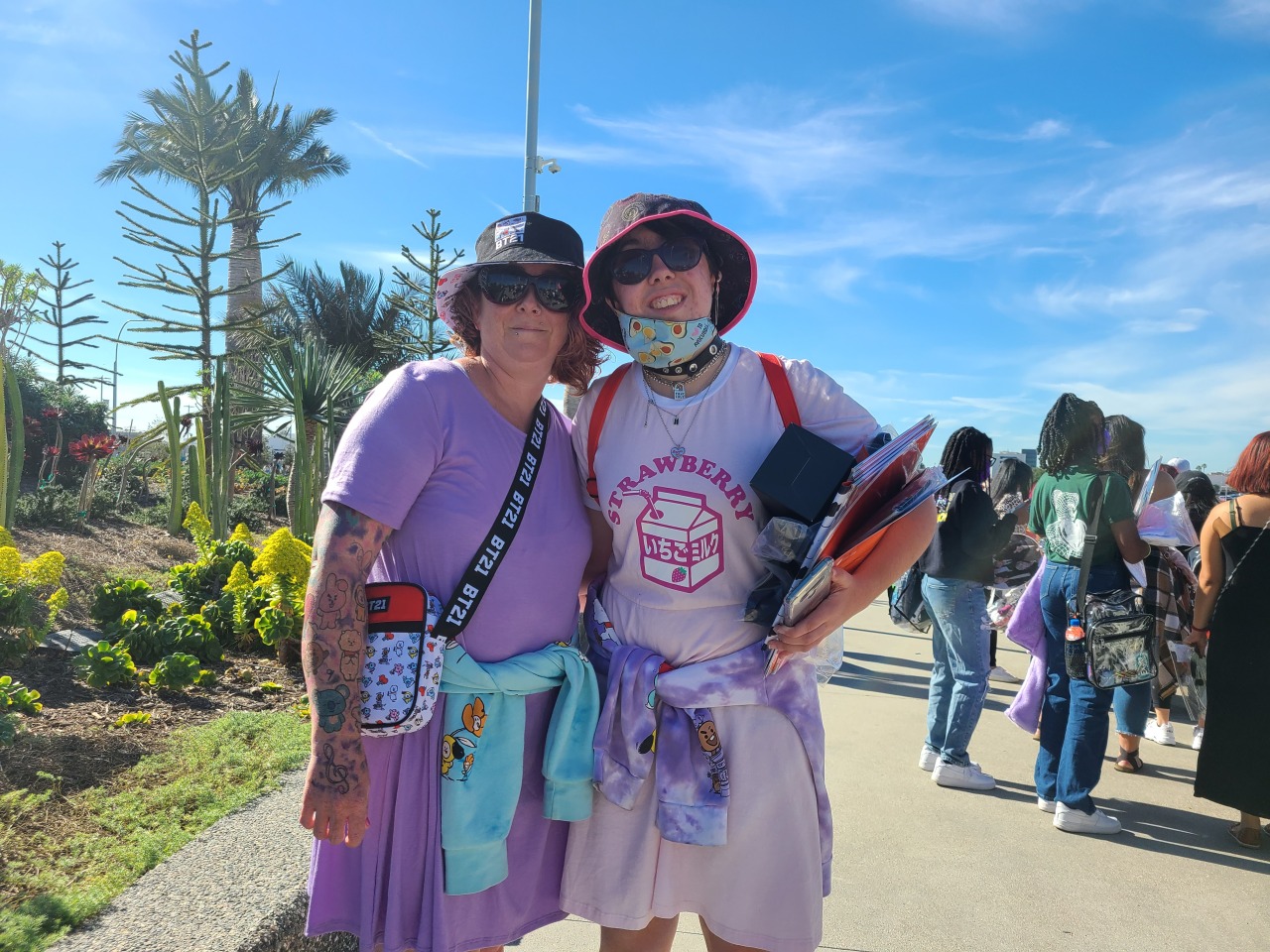 Marie Brandt (left) and her daughter Noraa are at SoFi Stadium on Friday.
Marie Brandt, 43, and her daughter Noraa, 17, were decked out head-to-toe in “BT21,” the BTS merchandise and apparel collection from Line Friends. Marie even had colorful tattoos of the characters and other BTS-inspired designs covering her right arm, showing her love and devotion to the K-pop act. Noraa was no less passionate than her mom, with a bag, hat and accessories all carrying messages from BTS and their songs.

Marie didn’t think she’d be into the BTS when she went to her first BTS concert with Noraa in 2019.

“We went to Metlife (Stadium) in 2019. I wasn’t an Army yet. I just took her. It was fun for her and I remember telling her that they were good entertainers, but I didn’t really pay attention. So now I’m just like, it’s very overwhelming,” Marie said.

“They are my anxiety medicines,” Marie said, describing her passion for BTS. “I have a lot of anxiety and they’re my coping mechanism. So, they’re like my medicine.”

“I’m really looking forward to the concerts, just because it’s been so long that I’ve been to any type of concert. And as they’re my favorite group, I get the feeling that I don’t yet believe it’s real, but I know it is,” Noraa added.

While Marie and Noraa arrived at 8:00 a.m. and waited in the line for four and half hours, some fans decided to skip the merchandise to focus on making memories with friends and families.

Festivities for BTS fans were also held beyond the concert venue and throughout the city.

Another main attraction for Armys were the cup-sleeve events -- a popular form of event hosted by K-pop fans at local cafes to get together and share support for their artists. They usually take place at local coffee shops and is a mix of pop-up café and small marketplace for Armys to engage in.

Michelle Sweeney of BTS fan-site Our Heartshakers co-hosted one of the biggest cup-sleeve events of Friday at a bubble tea shop in LA’s Koreatown. Around eight vendors participated and around 500 fans participated.

“It was important that the experience was larger than life. It needed to leave a lasting impression when people came in. The whole place should be an immersive experience,” said Sweeney.

When fans entered the store, they were first asked to buy drinks from the bar, before moving on to take pictures at a special photo spot with life-size cutouts of each BTS member. Then they got a chance to check out booths packed with fan-made badges, stationary, tumblers, accessories and even snacks.

Connie Alvarez, a cup-sleeve organizer herself, joined Friday’s market as a vendor. Devoted to bringing together BTS fans in the smaller cities around the world, Alvarez has been organizing the events as her hobby and has gathered thousands of Armys through cup-sleeve events at around 63 regions in and out of the United States.

“I couldn’t find what I wanted, so I looked out for ways to create it myself,” Alvarez said, explaining why she joined the event as a vendor this time. Her creations included an assortment of pins for bags and clothes. The prices for the items ranged from $10 to $13.

A similar event was held in Alhambra, a city to the east of downtown LA, co-hosted by Jersey Huang.

“Today is to celebrate BTS’ comeback to LA. We’re all very excited that they’re finally having their first concert since the COVID-19. We just wanted to basically give them our event to celebrate, have fun and meet each other,” Huang, 26, who operates event-organizer Borahae Events.

According to Huang, around 600 people visited that day, making it one of the biggest fans events that she has organized since 2019. 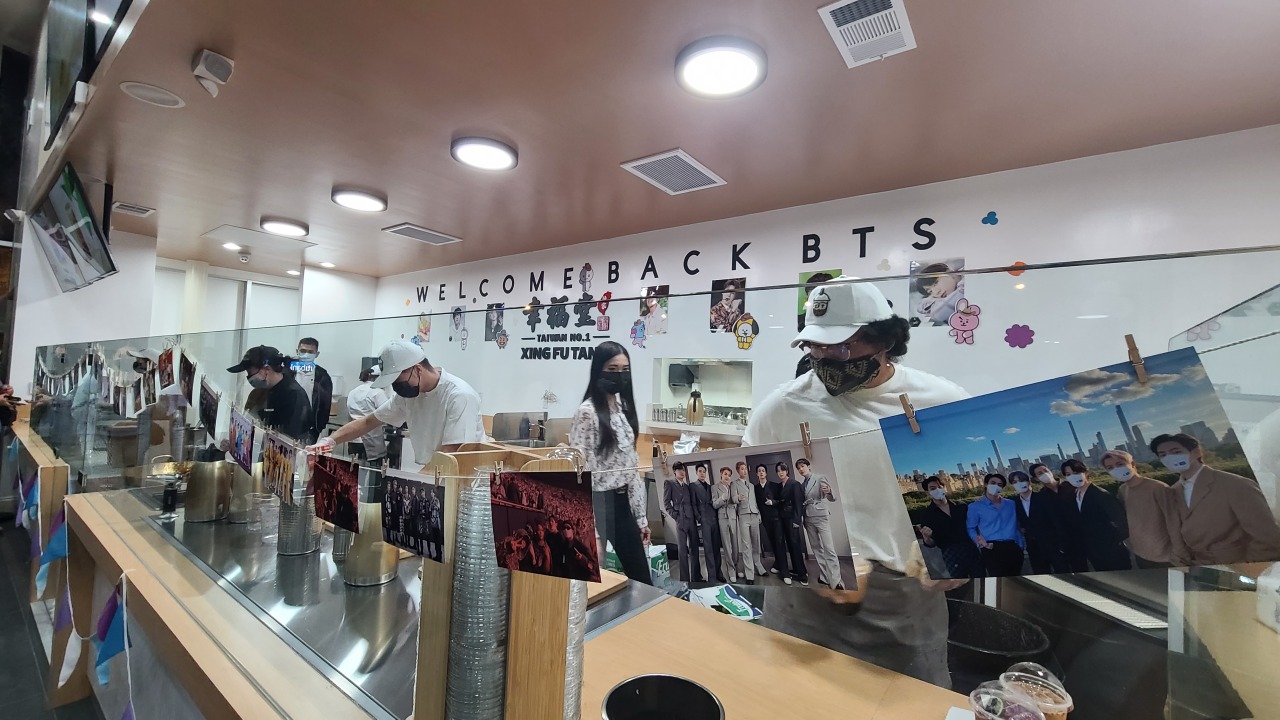 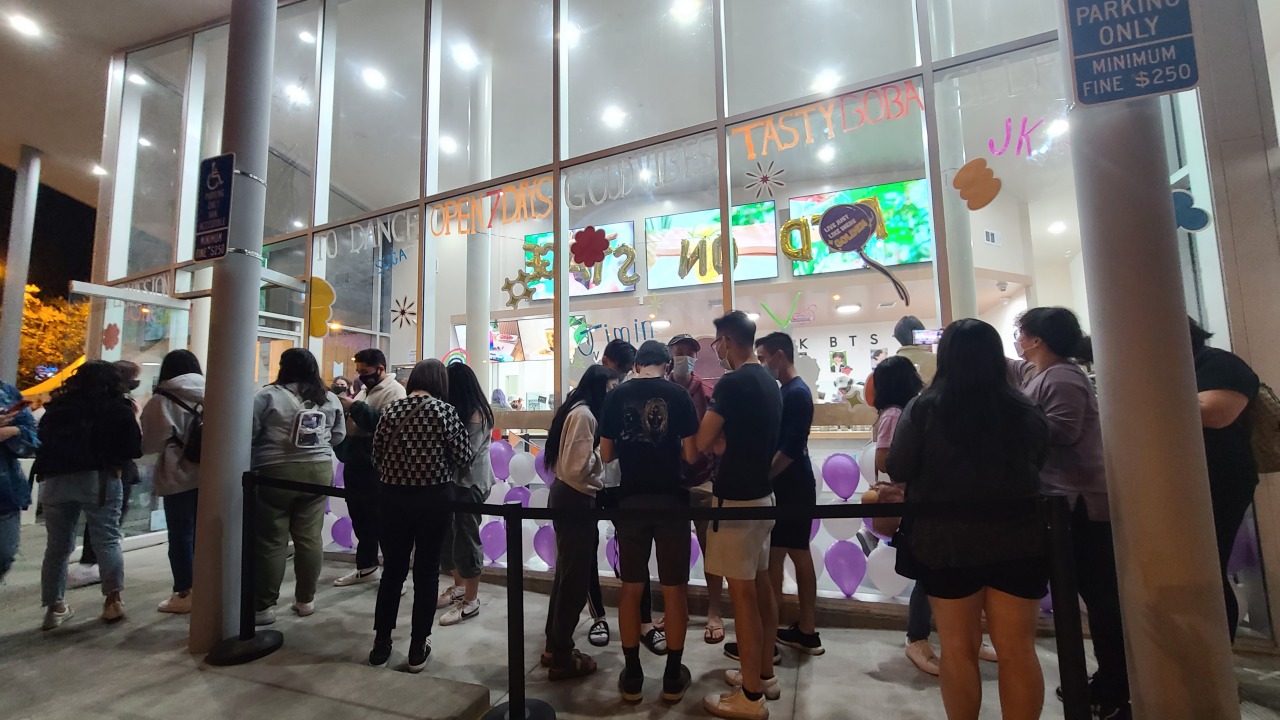 A “Permission to Dance” cup-sleeve event takes place at Xing Fu Tang in Alhambra, California, Friday.
The long-awaited concert kicked off on Saturday night, as concertgoers filled up SoFi Stadium. The venue became a small universe unto itself, with fans of all ages, genders, ethnicities and styles, coming together with a shared love for BTS and excitement for their monumental reunion.

Ayda, who said she “became a solid Army in 2018” after seeing them at the United Nations, was set to celebrate her 69th birthday at Sunday’s concert.

“I’m very, very excited. I always say that V and the maknae-line (youngest members) are my bias, but I can never give up on Hobi and Jimin,” the senior Army said, using the members’ nicknames naturally.