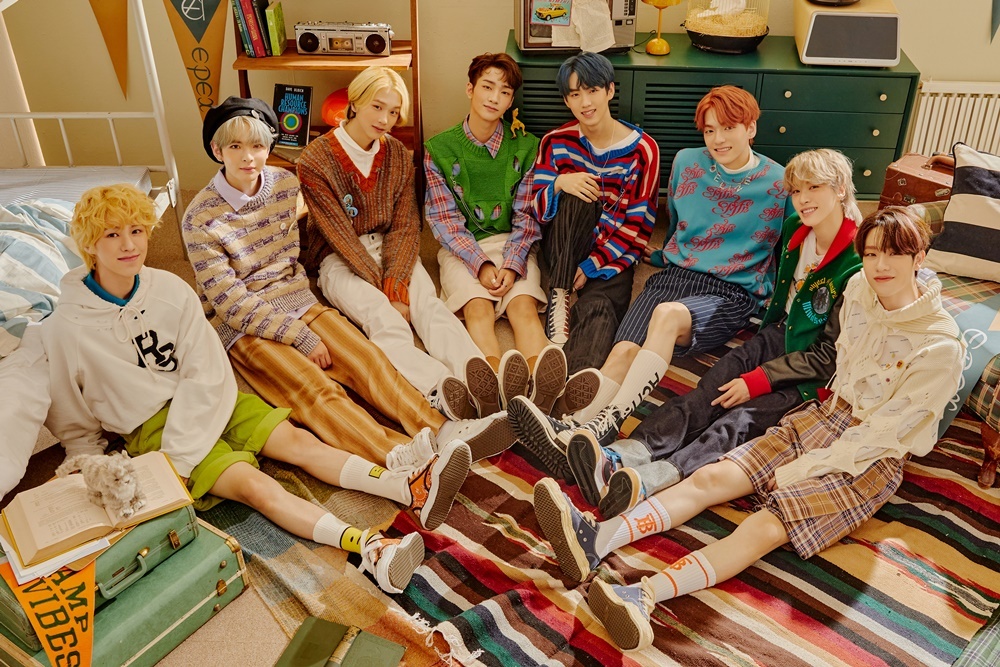 Back with a vibrant and quirky title song “Do 4 U,” the eight members were more hyped up than four months ago when they first met with The Korea Herald for an interview following their debut with “Bipolar Pt. 1: Prelude of Anxiety.”

Running the ends of two extreme concepts as newbies in the field is no easy feat, but the bandmates not only pulled if off perfectly but delved into the topic of teenage love, sharing their own stories through the new album.

“If we had taken up a more serious, fierce concept in the first EP, we’re back in a cute mood for the second EP just like the lyrics,” Ye-wang said during the interview.

“It was really fun. We had enjoyed making ‘Lock Down,’ but I think ‘Do 4 Me’ made us laugh more. I think all the members have become brighter,” Ayden said.

Indeed, even though it was late in the evening after a long event-packed day when they got to The Korea Herald studio, the members still seemed loaded with energy.

To match the “teenage love” concept of the new title song, all the members had their hairs dyed in an assortment of colors, from blond to ginger to blue.

“I think we were able to better embody the concept because it befitted our age group,” the group’s leader Wish said, adding, “I knew all the members had their cute sides, but it’s become more evident now. We’ve become more affectionate to each other as well.”

Although not a song self-written by the members, they explain “Do 4 Me” is not completely unrelated to their own stories.

“The lyricist interviewed us about what love was like for kids in our age, how teenagers fell in love, what we do, how we end relationships or learn that love has ended,” Wish said.

Most of the members were taken aback with the question as they had never had a proper chance to think about what love was to them.

“When I first got the question, it was difficult and nothing really came to mind. And I think it became a chance for me to think more deeply about it,” MU said.

Wish added, “Since the song blatantly speaks about love itself, the members had conversations with each other on how we’d actually feel and think if we were put in a certain situation.”

It’s not only the topic of love that had caught them off guard. In the song, they sing of wanting to become like a cat to grab all their lover’s attention. Mimicking feline’s movements was another challenge for some of the members.

Ayden, who explained that he had not been so fond of cats before, had to make some efforts to adjust to the concept.

“I even changed my tablet computer home screen to a cat image,” Ayden said, while A-min noted Ayden went around wearing T-shirts with cats on to make himself “more comfortable” with the whole idea.

“Come to think of it, he used to be a doe-like image, but I think he’s become more like a cat now,” leader Wish said.

The group’s rappers, Jeff, Keum Dong-hyun and Baek-seung, tried their hands as vocalists with the new album.

“I think I came to study more about my tone of voice. If I’d gone with the tone that best suited my voice in ‘Lock Down,’ I changed it to make it brighter this time,” Jeff said.

Explaining the song was a challenge personally for him in many aspects, Dong-hyun said “the rappers were able to contribute to the vocals, and we’ve all become more stable in our performances. I think, with the new energy, we’ve all advanced in our own ways.”

Meanwhile, the members said the new album “Bipolar Pt. 2: Prelude of Love” was like a book of love in itself, with each track depicting the different colors of love.

“The album talks about both the first love and first breakup, and the lyrics carry our own stories,” Dong-hyun said.

Among the sub-title tracks, Ye-wang recommended “Breathtaking.” “It contrasts in both the melody and the message from the title track. It approaches love with a more serious attitude. So when you feel you’ve become used to ‘Do 4 Me,’ I recommend listening to ‘Breathtaking’ as a refresher,” he said. 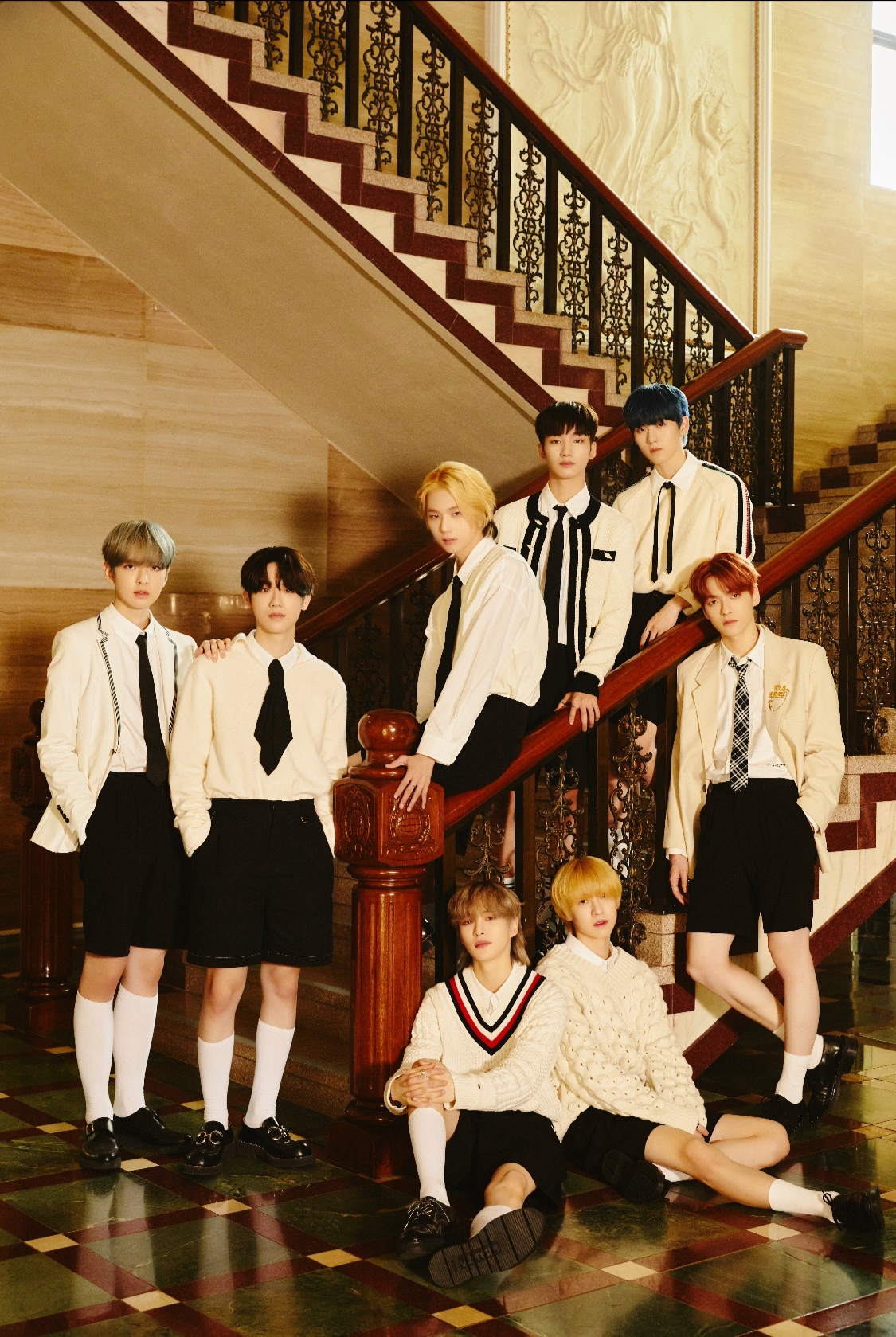 “It sings about love spreading, and it’ll make you feel better when you’re down or feeling lonely,” he explained.

Meanwhile, “Traveller” is like a fan song, MU said, saying it would suit any winter playlists.

“The album has different songs ready for different moods. ‘Do 4 Me’ is for when you’re in up for something fun, while ‘Love Virus’ is a song to play while on a drive, and ‘Breathtaking,’ when you’re in a pensive mood. I recommend you listen to all of them one by one,” Wish said.

It has been a short yet momentous six months for the boys, who made their debut in June and swiftly returning with another album in just five months.

The hard work seems to have paid off, as EPEX has been named as nominees for three of the main categories of this year’s Mnet Asia Music Award, one of the nation’s biggest year-end music events -- best new male artist, artist of the year and album of the year with their debut EP “Bipolar Pt. 1: Prelude of Anxiety.”

One of their best moments of the year was a recent in-person gig at SBS’ K-pop Super Concert held last month in Daegu.

“It was one of our proudest moments, performing in front of our fans. As we haven’t been able to show everything we’ve been preparing, we’re grateful to have performed in person at least once in front of them,” A-min said.

Wish piped in, “I think we realized what we had been missing out on with the concert, debuting as a K-pop idol amid the pandemic situation.”

In closing the interview, Dong-hyun picked EPEX’s debut as the act’s biggest achievement in 2021.

“I personally became a K-pop idol because I wanted to spread hope to people. But when we were preparing for the first album, we couldn’t really acknowledge those people who were supporting us, and it was with debut that we made ourselves known, and even came to hold a fan meetup, and so on. So, with this album, the members really delved into conveying a hopeful message,” Dong-hyun said.