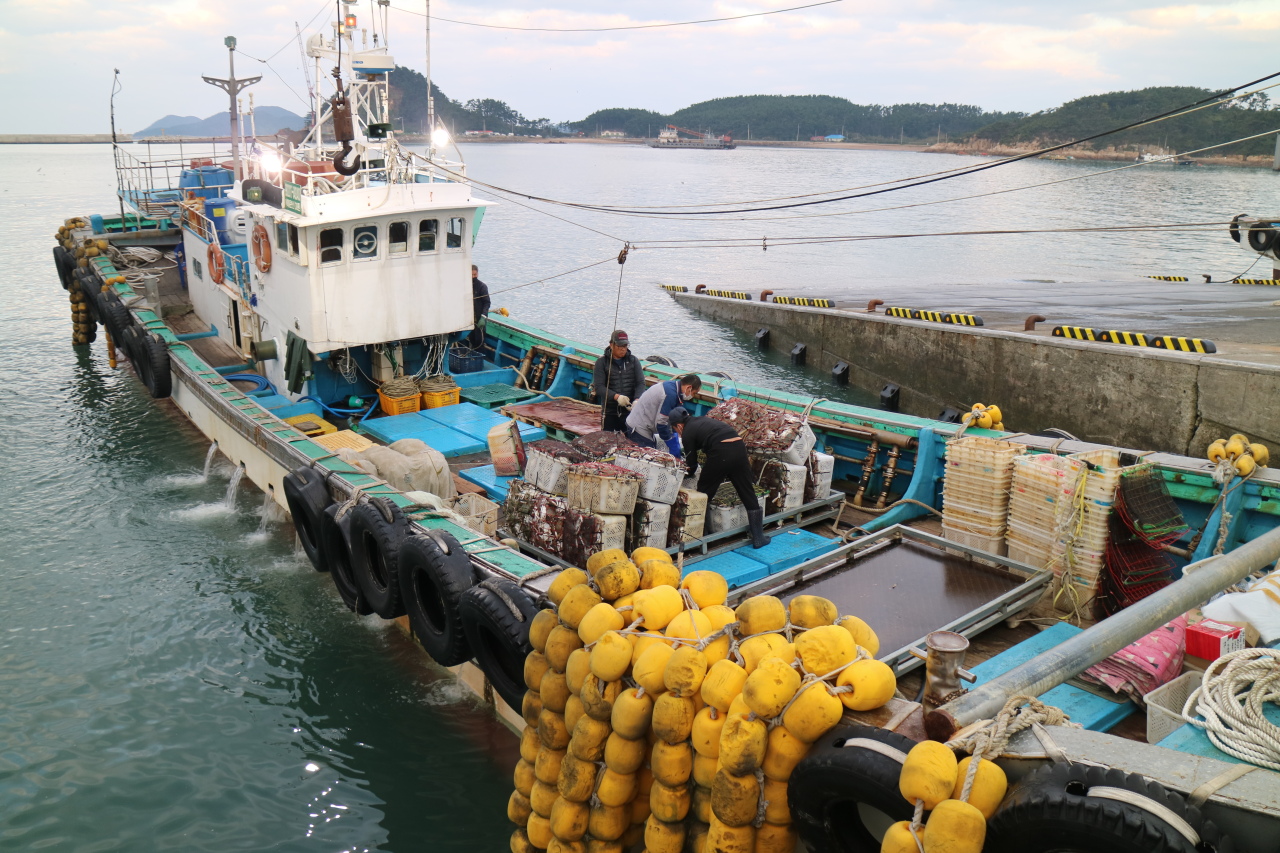 Fishermen lift boxes filled with blue crabs from a water tank of a fish carrier boat moored to the wharf of Sinjin Port in Taean County, South Chungcheong Province, on Oct. 24. (The Korea Herald)
TAEAN, South Chungcheong Province -- Just before sunup, Lee Young-ho, a seasoned fisherman with over 30 years of experience, silently waits for boats carrying blue crabs as the season for the seafood reaches its height.

Soon afterward, small and big boats sail into Sinjin Port in Taean County, South Chungcheong Province, the second-largest source of blue crab after Incheon, accounting for 29 percent of total production of the country.

A crane lifts 28 boxes filled with blue crabs weighing 40 kilograms each from the boat, worth about 10 million won ($8,500).

“It has been a productive fall season for crabbing here. The water temperature is a very important factor affecting crab production. They hate cold water,” Lee said.

The temperature of the sea off Taean appeared to have stayed at the level where crabs become active. If the sea temperature suddenly drops, crabs go into their winter dormancy mode, burrowing into the mud and sleeping through the cold months. 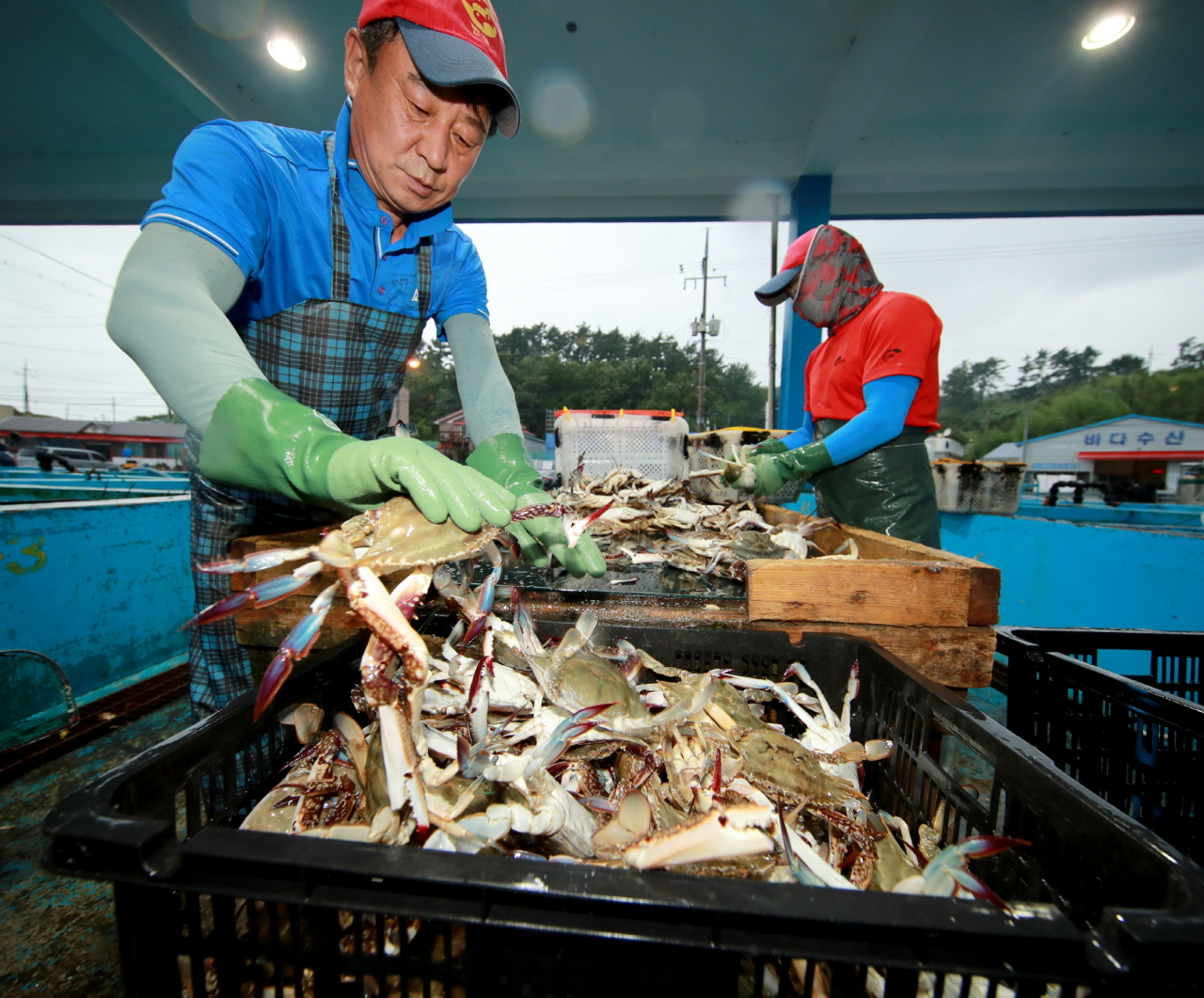 Freshly caught blue crabs go through a series of processes prior to being sold in a daily auction at Chaesokpo Port in Taean County, South Chungcheong Province. (Taean County Office)
Blue crabs caught in the Taean area have thick upper shells and light blue legs. Their white meat has a firm and moist texture with a mild, salty ocean flavor and subtle sweet undertones.

Fall is typically the best time to crab. From June to August crab catching is closed for spawning season. Crabs caught in the fall tend to have more meat, while spring is the best time for egg-laden female crabs.

At the port, the crabs pulled up from the boats go through a selection process to separate them by gender and size. Crabs with missing limbs and dead ones are picked out by hand.

Some of them are packed in cardboard boxes with fine sawdust to keep them alive during transportation to large chain stores in Seoul, the rest are sold to the highest bidder at a daily auction, mainly primary wholesale dealers who distribute them to nearby fish markets and restaurants.

An auction operated by the National Federation of Fisheries Cooperative, better known as Suhyup, took place at a garage-like venue, only five minutes’ walk from the wharf. 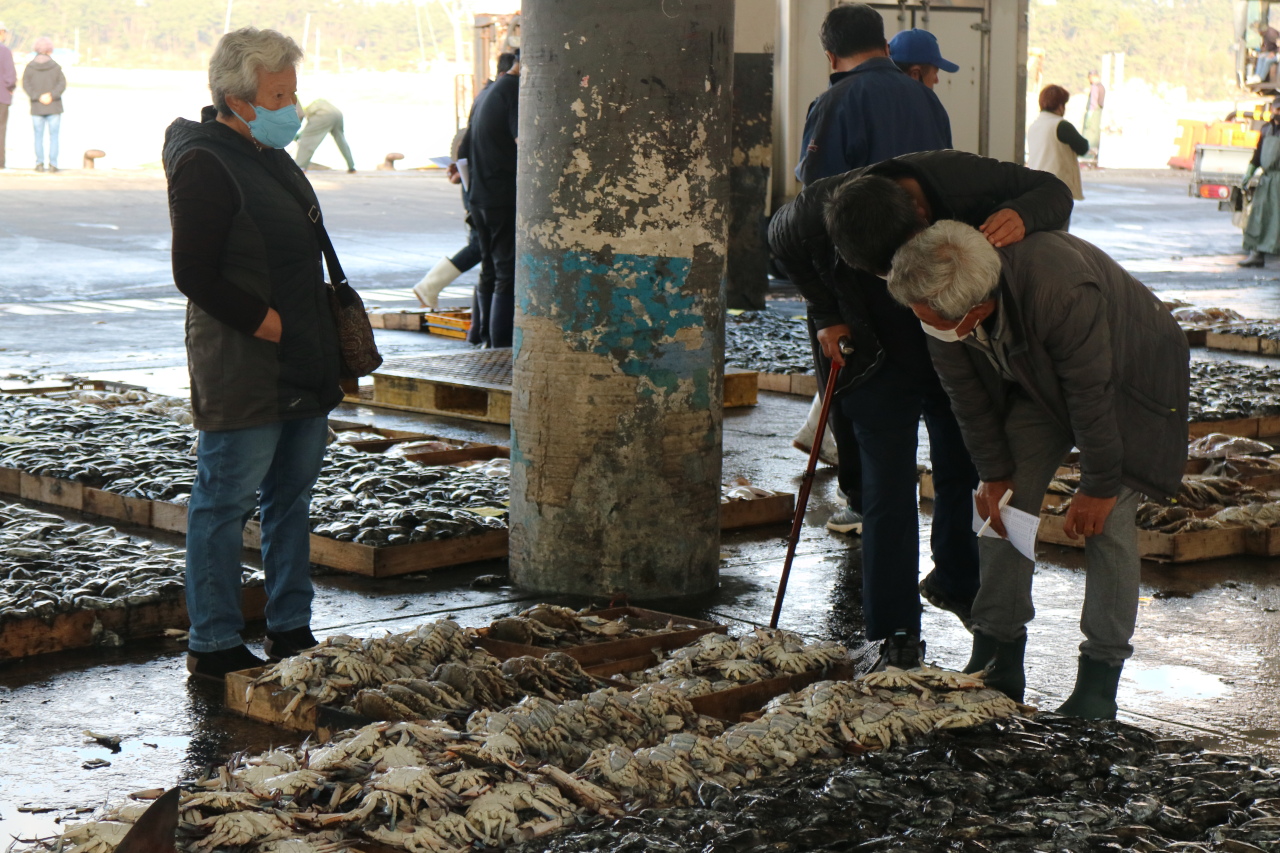 Buyers check the quality of fishes before an auction operated by the National Federation of Fisheries Cooperatives starts at Sinjin Port in Taean County, South Chungcheong Province, on Oct. 24. (The Korea Herald)
At 9 a.m. sharp, about 50 people gathered to place bids on a batch of freshly caught seafood, mainly cuttlefish and crabs. The air was filled with the sound of auctioneers calling out prices, while buyers bid with hand signals.

Kim Jung-suk, a wholesaler who participated in the auction, bought female crabs at 9,200 won per kilogram -- and 6,500 won for male crabs.

“The size of the crabs was slightly smaller than I expected but the quality was fine today. I’m going to distribute them to local fishmongers and restaurants selling soy sauce-marinated crab and crab soups,” she said.

Salt and fish are important ingredients for the local food.

In the past, before refrigeration and freezing were used for preserving food and the transportation system was not well developed, salting was the main way to give fish a longer shelf life and make it suitable for storing at warmer temperatures.

With abundant high-quality salt produced in the region, Taean developed a salting culture and fermentation culture unique to the coastline.

The county is also known as a high-quality salt production area. The unique salting and fermentation culture developed with the resource.

Traditional Taean dish gegukji, a spicy seafood stew boiled with crab, shrimp and cabbage, is part of that culture.

The old-fashioned recipe aimed at maximizing on affordable ingredients by using cabbage and radish greens left over from making kimchi during the pickling season, which typically falls in late October or early November.

As the dish gains popularity nationwide, restaurants have been modifying the recipe to suit young people’s tastes, reducing the amount of salt and using pricier vegetables. 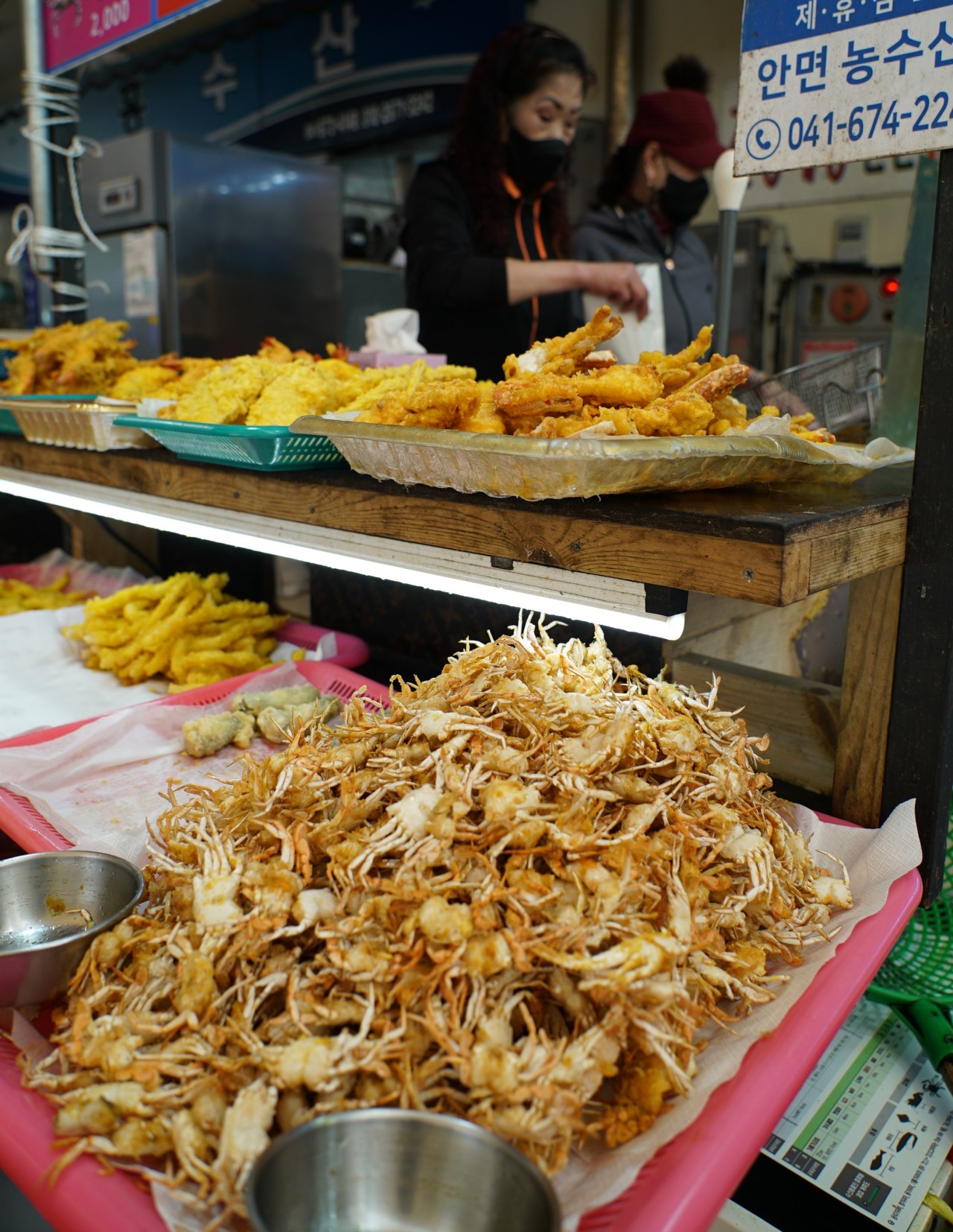 “The taste cannot be bad because we use fresh crabs delivered by wholesalers every day. It’s a comfort food that warms you up especially in fall and winter,” she said.