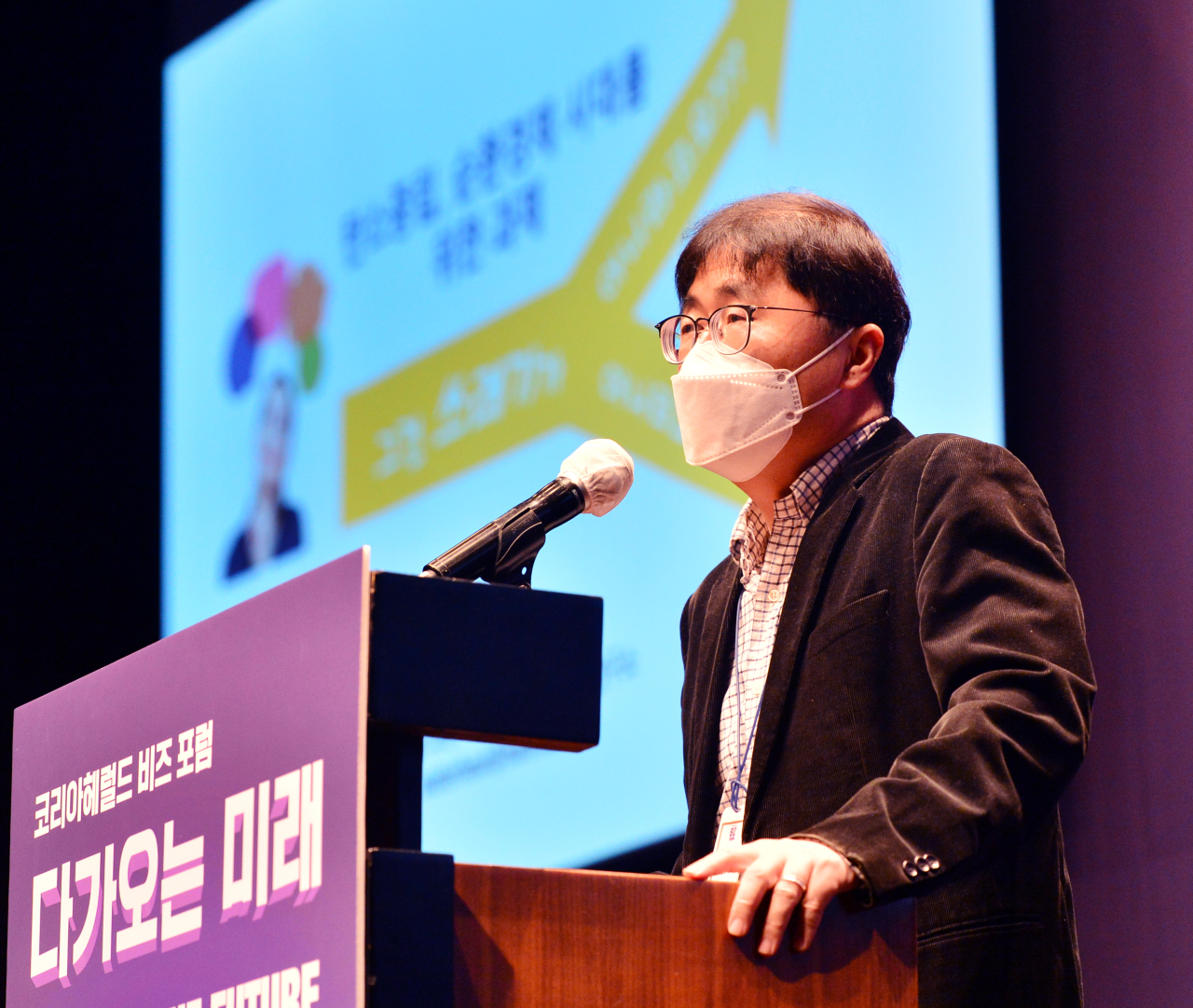 Hong Su-yeol, the head of Resource Recycle Consulting, speaks at the Korea Herald Biz Forum: “Shape of The Future” at the Shilla Seoul on Tuesday. (Park Hyun-koo/The Korea Herald)
The world is talking about green energy to slash emissions and curb climate change. But without a drastic cut in the consumption of plastic and other waste, a net-zero economy just won’t happen, an environmental expert urged Tuesday.

Speaking at the fourth Korea Herald Biz Forum on Tuesday, Hong Su-yeol, head of Resource Recycle Consulting, said the world needs to transition to a circular economy in which resources are used again and again in a closed loop and create no waste at all.

“The climate change caused by carbon emissions and microplastics would be the core problems threatening humanity,” Hong said.

In the past 65 years, 8.5 billion metric tons of plastic has been produced worldwide. But most of that -- 6.3 billion tons -- has either been buried underground or incinerated, returning to the ecosystem in the form of microplastics or adding to emissions. Only 9 percent of the plastics have been recycled, Hong said.

“To deal with the waste problem, it is crucial to reduce the consumption of new materials and reuse what we have. That is why we have to pursue a circular economy,” Hong said.

While the current world is able to recycle items and is more advanced than the “linear economy,” in which a resource material would go straight into waste after use, it should go further to close the loop in the recycling cycle, Hong said.

“Governments and companies alike should make efforts to change the society into a circular economy, to close the loop in the recycling cycle and lose as little value as possible in the raw materials and components in products,” Hong said.

Hong stressed that for the transition, society should come up with strict measures to reduce overall consumption, and raise the recycling rate to acquire more recycled materials to be used to produce new goods.

He pointed to the example of Europe, which adopted a regulation that requires plastic bottle manufacturers’ products be composed of at least 20 percent recycled materials. Soon enough, strict regulations would be placed against products that are not made of recycled materials, globally, so producers need to act quickly and make changes, he said.

Obtaining recycled materials will also become a deciding factor for the survival of the firms, he added.

The world’s average recycling rate is around 20 percent, and when it comes to plastic waste, the figure goes down to 12 percent, according to Hong.

The waste expert also noted how using recycled materials is essential in the path toward net-zero emissions, a goal many countries around the globe, including South Korea, have set.

“The effects of using recycled materials, such as metal and aluminum scraps, to produce new goods, in reducing carbon emission is undermined,” Hong said.