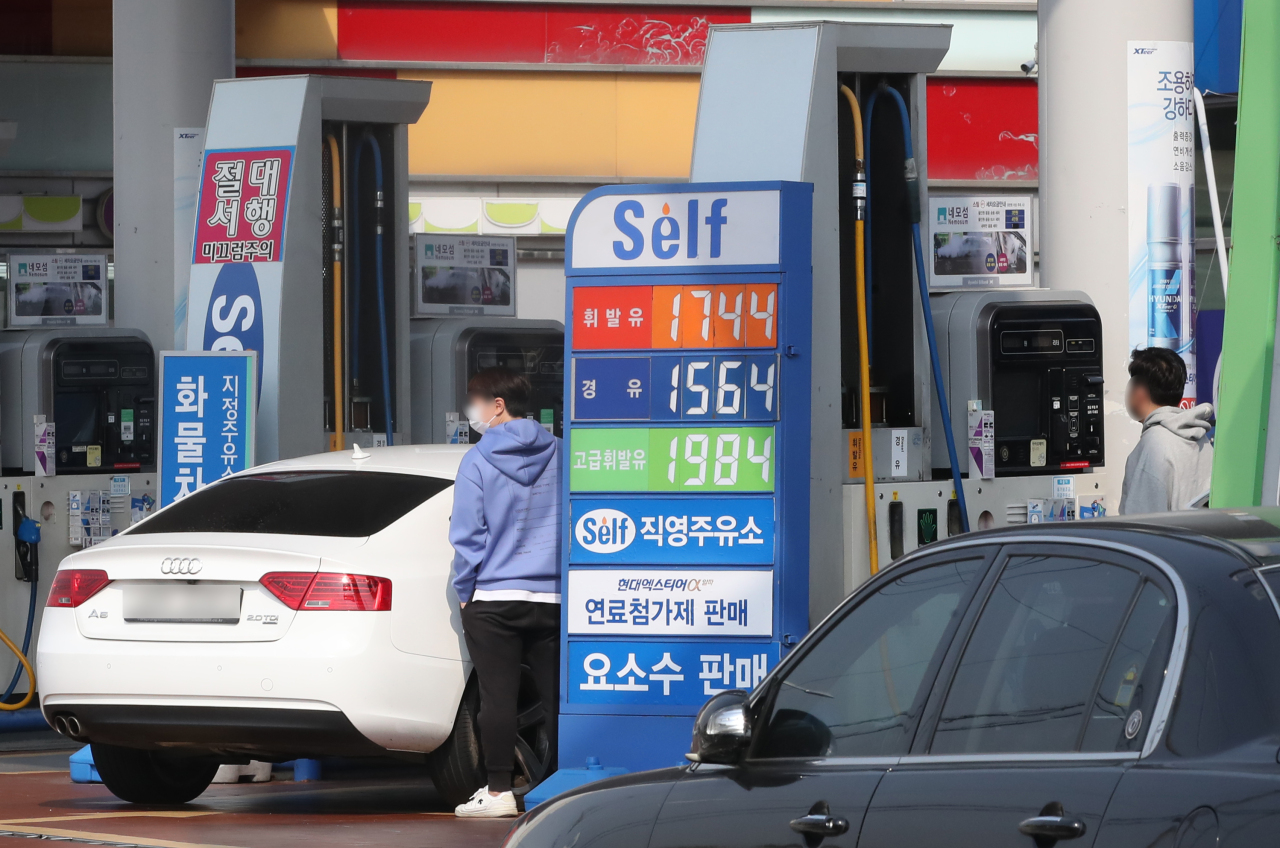 Two men fill their cars up at a gas station in Seoul, Tuesday. (Yonhap)
The government will slash fuel taxes by 20 percent and cut tariffs on liquid natural gas to near zero in November for six months to fend off inflationary pressure further building up with rising energy prices.

According to the Ministry of Economy and Finance, taxes on gasoline, diesel and liquefied petroleum gas will be cut by 20 percent starting Nov. 12, marking the highest tax cut in history. The temporary cut will end in April, the ministry said after a meeting with the ruling party.

Authorities expect that the temporary tax cut will amount to a 2.5 trillion won ($2.1 billion) reduction in tax revenue for the government for six months.

The decision came as oil prices surged to a near three-year high and natural gas prices hit all-time high. Prices of Dubai crude, the country’s benchmark, hit $83.89 per barrel on Oct. 18.

The government initially planned a 15 percent tax cut but raised the rate to 20 percent in a bid to ease the burden of households and businesses already facing growing costs for housing and food. A global supply chain bottleneck also continued to become a source of upward pressure in prices.

Under the tax cut scheme, the gasoline fuel tax will drop by 164 won per liter, the diesel by 116 won and the LPG butane by 40 won, based on the average gas retail prices reported in the third week of this month. A gasoline car owner who travels about 40 kilometers a day, for instance, is likely to save some 20,000 won per month.

“The government will mobilize all available policy tools to stabilize consumer prices as the annual growth of inflation is forecast to top 2 percent this year,” Finance Minister Hong Nam-ki said during a government meeting.

“We will run a joint monitoring system with related ministers and consumer groups to ensure an immediate impact of the fuel tax cut in the market,” the ministry said.

Asia’s fourth-largest economy’s consumer prices have exceeded the central bank’s inflation target of 2 percent for six months in a row since April. Consumer prices increased 2.5 percent in September on-year after gaining 2.6 percent in July and August.

In September, inflation in the United States and Europe also rose 5.4 percent and 3.4 percent, respectively, hitting the highest numbers since 2008.

Public utility charges on gas will be frozen for November and December. A government-led discount event on rice, egg, beef and pork will be held for price stabilization, officials added.