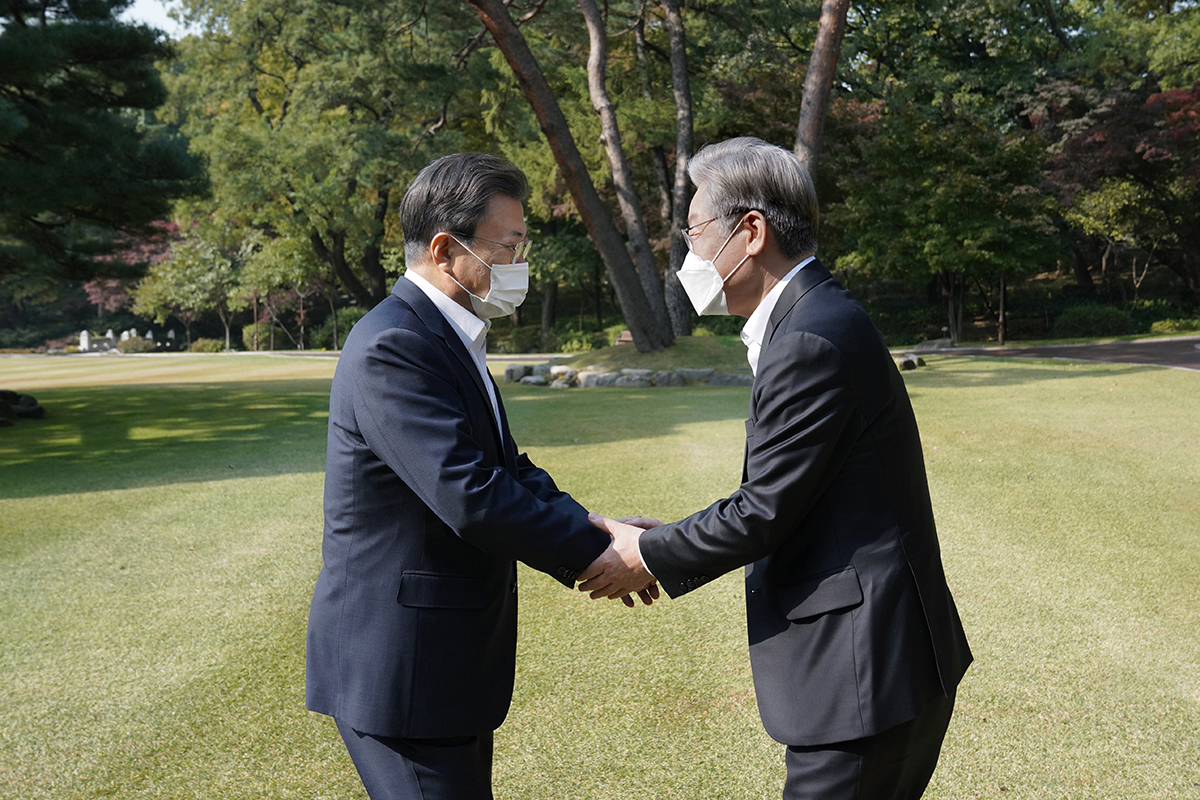 Their tea meeting that lasted for about 50 minutes early in the day started as the president congratulated Lee for being elected the party’s presidential nominee.

“After finishing a fierce competition, it is also important to heal the scars and become one again,” Moon said. “In that regard, it was great for you to hold a meeting with former party leader Lee Nak-yon on Sunday.”

On Sunday, Lee, former Gyeonggi Province governor, met with former Prime Minister Lee Nak-yon, the runner-up in the party's presidential primary, and secured his promise to help his campaign as an adviser.

“It is with great emotions that you become a new presidential nominee,” Moon added, referring to the 2017 presidential election when the two locked horns in the party’s primary.

The two laughed when Lee responded by saying: “I want to apologize again for being too harsh during the primary back then.”

“People choose a leader for a better future and I think what’s most important is policy. I’m asking you to develop many good policies during the campaign and compete with other candidates with the policies,” Moon added.

The president, who delivered his final speech at the National Assembly for next year’s budget plan on Monday, also noted that most of the budget will be used by the next government.

“I had difficulties in securing enough of a budget because I took over the state administration in the middle of the fiscal year,” Moon said. “The budget plan was set up in consideration of the next government’s use.”

The government proposed a record high budget of 604.4 trillion won ($519 billion) as it plans to maintain an expansionary fiscal spending next year to bolster the economic recovery and narrow social gaps caused by COVID-19.

Lee expressed his sympathy with Moon’s speech and the budget plan.

“I totally agree with what you said in the speech – structural transformation across industries and the government’s expansionary spending for the drive,” Lee said.

Tuesday’s meeting came a day after Lee announced his resignation as Gyeonggi Province governor to commit himself to the presidential election slated for March.

Lee, a vocal supporter of a universal basic income and reconciliation with North Korea, has promoted himself as the candidate closely aligned with Moon’s values. Moon’s backing is expected to give him a big boost before the official launch of his election committee.

Compared to his predecessors who suffered shrinking approval ratings in their final days, Moon still enjoys popularity with his approval rating hovering at about 40 percent. His single five-year term is to finish in May.

In recent polls, Lee is slightly ahead of both the leading contenders of the main opposition People Power Party, Yoon Seok-youl and Hong Joon-pyo. But he continues to be dogged by questions about his involvement in a massive corruption scandal surrounding an apartment development project conducted in Seongnam, south of Seoul, in 2015, when he was the city’s mayor.

Lee has apologized for his mishandling of the issue but denied all allegations about him, while opposition parties have upped political offensives urging a special counsel’s probe into the snowballing scandal.

Ahead of Tuesday’s meeting, People Power Party leader Kim Ki-hyun also asked the president to cancel the meeting, saying that it could send a wrong signal to the ongoing investigations.

Moon’s senior secretary for political affairs, Lee Chul-hee, who joined the meeting, said in a briefing that the meeting was held in a casual manner, stressing that they did not discuss politically sensitive issues, including the development scandal.