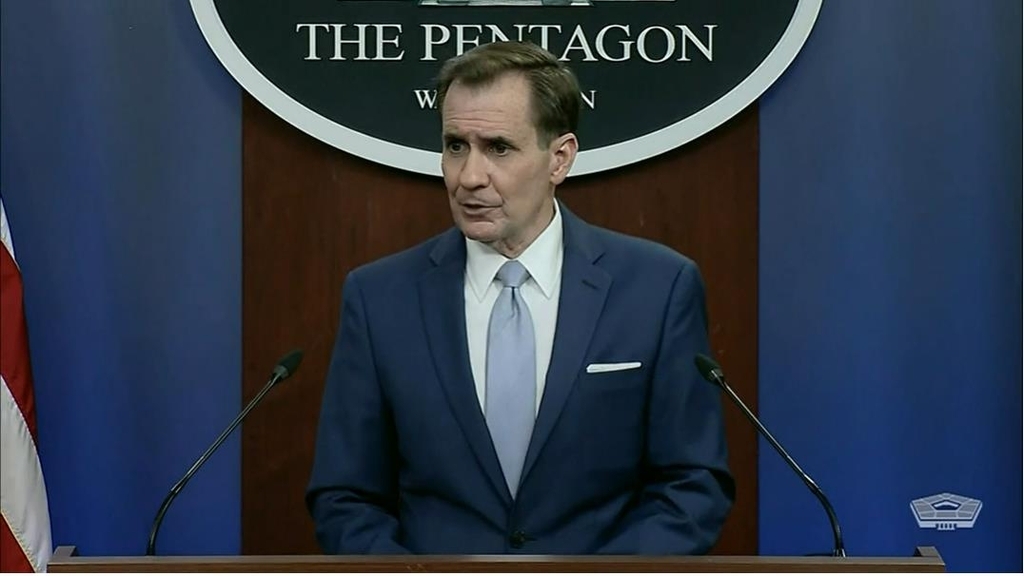 US Department of Defense Press Secretary John Kirby is seen answering questions in a press briefing at the Pentagon in Washington on Monday, 2021 in this image captured from the website of the defense department. (Defense Department Website)
WASHINGTON -- China should help denuclearize North Korea if it wishes to see stability on the Korean Peninsula, a Pentagon spokesman said Monday.

John Kirby also insisted that Beijing has a great amount of influence over Pyongyang that he said can be used to help the North make the right decision.

"What I can tell you is that we know China has influence in Pyongyang and that influence could be important to helping us all achieve the denuclearization of the peninsula," the Department of Defense press secretary said in a press briefing.

"And we certainly would like to see China be more cooperative and more helpful in what one would imagine would be a mutually shared interest -- that the peninsula be denuclearized for security and for throughout the region," he added.

His remarks come after a series of North Korean missile tests that included the test launch of a self-claimed hypersonic missile and a new submarine launched ballistic missile.

Kirby said he did not have any information with regard to weapons development cooperation between North Korea and China when asked, but reiterated that China could help bring the North back to the dialogue table if it chose to do so.

"China can help by enforcing the sanctions that have been in place. China can help by using their influence in Pyongyang to help the regime make the right decisions with respect to security on the peninsula," said Kirby.

"What we want to see is security and stability on the Korean Peninsula, and we believe that a big way to achieve that is the denuclearization of the North and China can play a positive role in that if it chooses to do so because they do have influence," he added.

North Korea is ignoring US overtures for dialogue, accusing the US of harboring a hostile intentions toward it. North Korea has also stayed away from any significant talks with the US since early 2019.

"We remain ready to meet with the DPRK without preconditions, and we have made clear that the United States harbors no hostile intent towards the DPRK," Kim said after his meeting with his South Korean counterpart, Noh Kyu-duk, in Seoul.

"We hope the DPRK will respond positively to our outreach," he added, referring to North Korea by its official name, the Democratic People's Republic of Korea. (Yonhap)