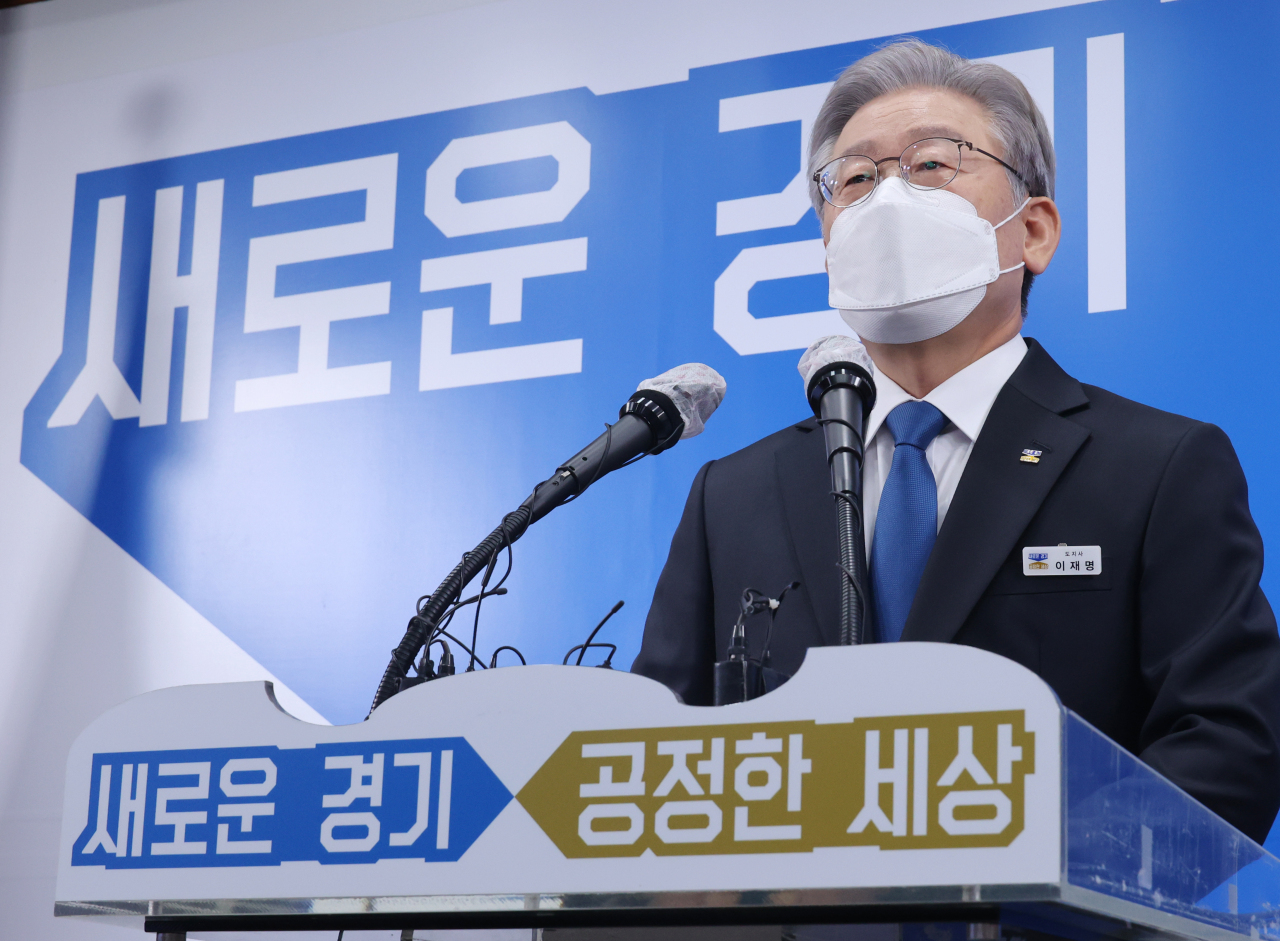 Presidential candidate Lee Jae-myung speaks at a news conference and steps down as governor of Gyeonggi Province, at the provincial government office in Suwon on Oct. 25. (Yonhap/Pool photo)
Democratic Party of Korea presidential candidate Lee Jae-myung on Monday announced his resignation as governor of Gyeonggi Province, starting his presidential bid in earnest as opposition parties ratcheted up their demands for an independent counsel investigation into the ongoing land development corruption scandal.

Lee said he was stepping down effective Tuesday morning, with eight months left in his term.

“I feel burdened with a heavy sense of responsibility, but I promise to fulfill my calling,” Lee said during a televised news conference at the provincial government’s office in Suwon, south of Seoul.

Lee is expected to register as a preliminary presidential candidate on Tuesday. He is also scheduled to have a symbolic meeting with South Korean President Moon Jae-in on Tuesday morning, according to presidential spokesperson Park Kyung-mee.

But there appears to be a bumpy road ahead as the primary election results started an internal feud within the Democratic Party.

The resignation came a day after Lee Jae-myung met with former Prime Minister Lee Nak-yon, who had initially lodged a complaint about the primary results but later conceded defeat.

Lee Jae-myung struggled to garner united support from the Democratic Party and its stalwart supporters and establish an integrated team.

The two Lees resolved to work together in the presidential race during Sunday’s high-profile meeting, apparently intended as a show of party unity.

Lee Nak-yon, who has accepted the role of standing adviser to the election polling committee, publicly pledged to support the party’s victory in the upcoming presidential election.

Meanwhile, the main opposition People Power Party has ramped up the political offensive against Lee Jae-myung, despite his attempt to openly dispel public suspicion about the high-profile land development corruption scandal and his denial of any direct responsibility or involvement during parliamentary audits held last week.

At a supreme council meeting, the leadership of the People Power Party on Monday reiterated that it was imperative to immediately launch an independent counsel investigation into the corruption scandal.

The conservative party also announced plans to establish a special committee to probe allegations that Lee may have been involved in the corruption surrounding the land development project in Daejang-dong in Seongnam, Gyeonggi Province.

People Power Party Chairman Lee Jun-seok said the party would restructure and expand the original task force on the issue, which kicked off in mid-September, to prepare for the presidential election more aggressively.

But the leadership of the Democratic Party has dismissed the growing calls for an independent counsel investigation.

Song said it was “structurally impossible” to conduct an independent investigation of Lee Jae-myung even if Lee agreed.

The question has been raised whether Lee Jae-myung played a role in designing the profit-sharing model that enabled astronomical profits for Hwacheon Daeyu, which participated in the project as a private partner. The corruption-laden project kicked off in 2015 as a public-private partnership during Lee’s term as mayor of Seongnam between 2014 and 2018.