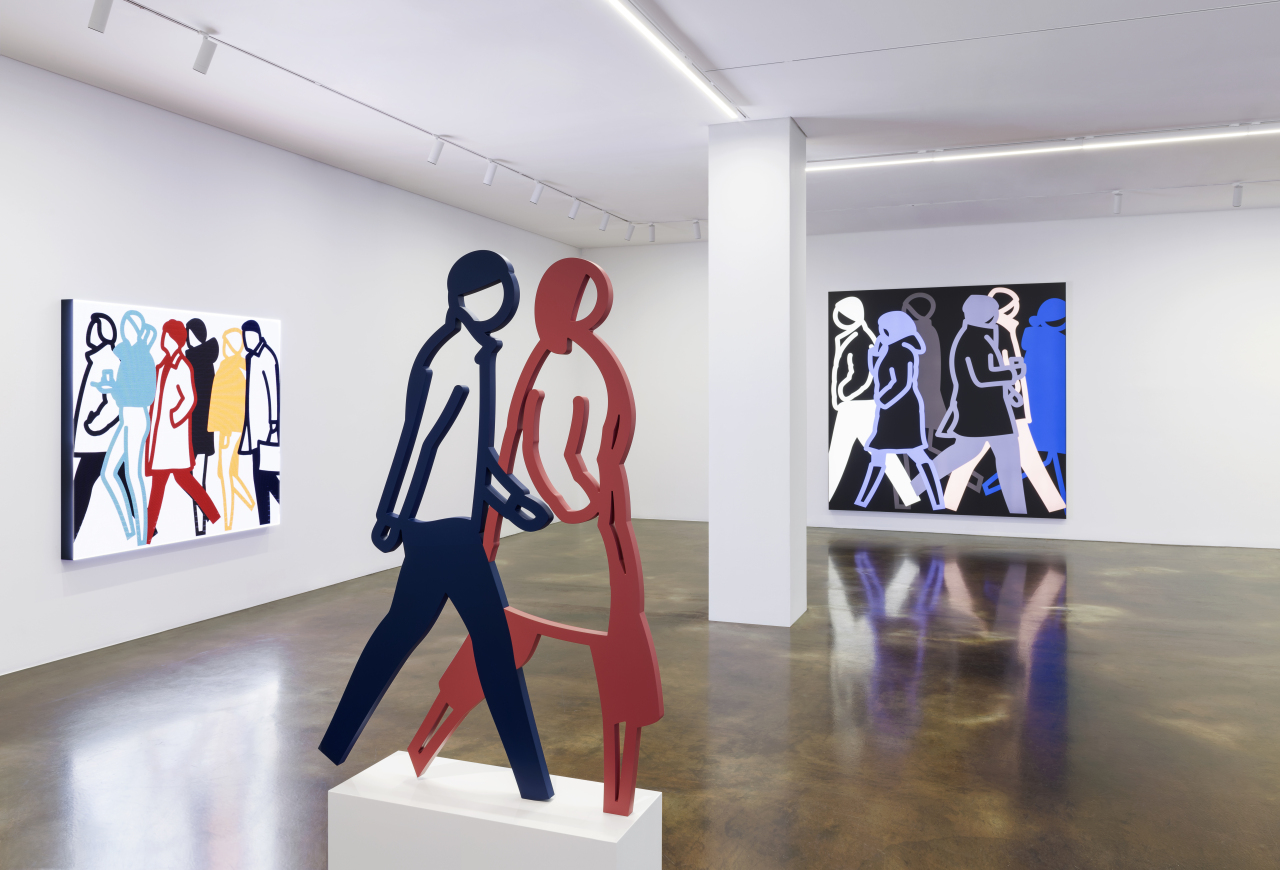 The artist became well known in South Korea after he made a strong presence in Seoul in 2011 with his light-emitting diode art piece “Crowd,” displayed via Seoul Square’s large-scale Media Canvas on the facade of the former Daewoo building, capturing people’s attention at one of the most crowded spots in the city.

Opie delineates the individuality of each fleeting passerby with keen observation, and simplifies images that turn into aluminum sculptures and paintings of various mediums. The artist is known to take inspirations from people and cities he travels. His signature images of people in the act of walking appear on the animated LED films, backlit paintings and aluminum sculptures. 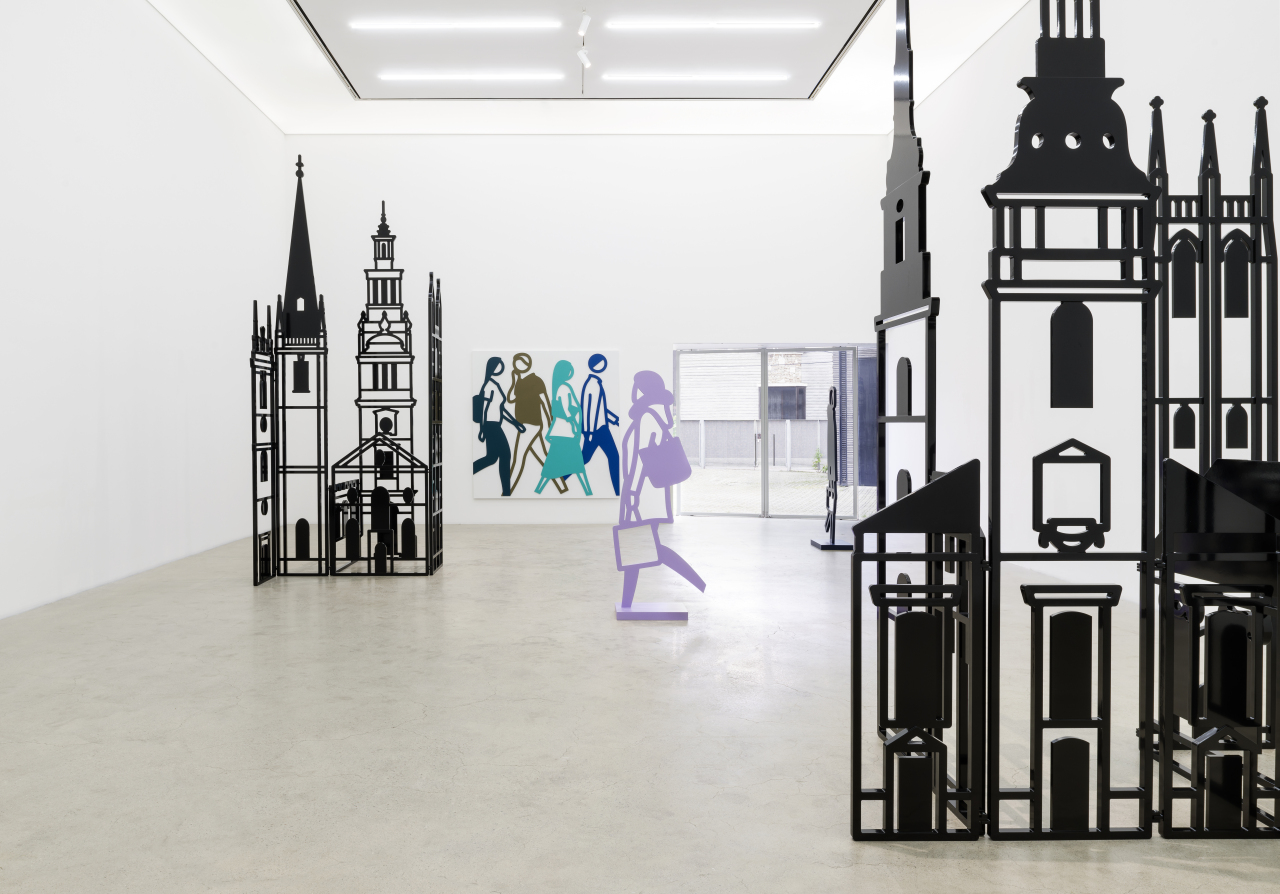 An installation view of the exhibition “Julian Opie” at Kukje Gallery (Courtesy of the artist and Kukje Gallery)
The aluminum sculptures were created based on the artist’s observations in the Belgian town of Knokke this year, and are on display at K3. The exhibition hall also shows 3D metal sculptures that Opie reinterpreted from London’s modern and historical buildings, taking a fresh look while staying in the city due to the lingering pandemic.

The gallery’s garden features his latest sculpture, “Incheon, Tower 2008,” which he produced after virtually traveling through Incheon via Google’s 3D maps. Incheon, a transportation hub located on the west coast of the country, comes into life in the aluminum sculpture of a building with hundreds of windows and distinct geometric lines.

While Opie’s works are widely known for his images of walking people and architecture, animals have long been a central subject in the artist’s oeuvre. The images of deer, roosters, cows and dogs are rendered in artificial primary colors associated with industrial environments. Opie dedicated the second floor of K2 with animal sculptures elevated on plinths, decorating the walls in the form of brightly lit light boxes reminiscent of familiar public signage and corporate logos seen across the city. 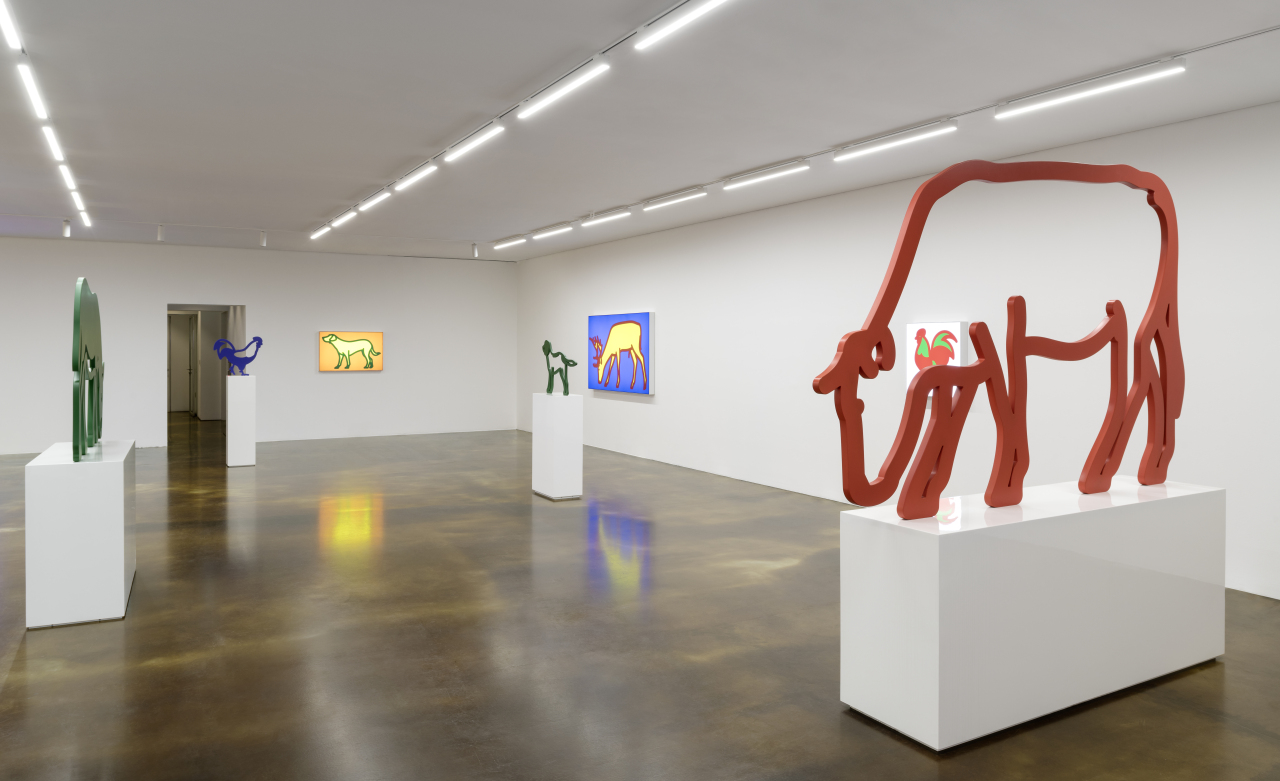 An installation view of the exhibition “Julian Opie” at Kukje Gallery (Courtesy of the artist and Kukje Gallery)
As Opie was not able to visit South Korea due to the pandemic, he offered a VR walkthrough video for the solo show at the gallery, which he produced himself in London, accompanied by his narrated comments on each work. The VR tour can be accessed on Vimeo.

The exhibition runs through Nov. 28. Advance online reservations from the gallery’s website are required to visit in person.