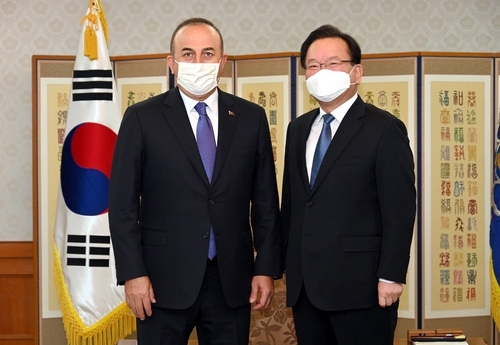 Prime Minister Kim Boo-kyum (Right) and Turkish foreign minister Mevlut Cavusoglu posing for a photo ahead of their meeting in Seoul on Friday. (Yonhap)

In their meeting, Kim asked for Istanbul's support on South Korean firms so that they can expand their economic ties.

They also touched on issues to increase personnel and cultural exchanges between the two nations.

Cavusoglu responded that, although there are currently restrictions regarding visas and flights due to the pandemic, Turkey will make its best efforts to revitalize exchanges between the two countries.

After the meeting, they signed a pact for the avoidance of double taxation between the two countries, as well as a scientific and technological cooperation agreement to boost economic exchanges.

Cavusoglu is on his three-day trip to South Korea. He is scheduled to depart the country Sunday. (Yonhap)