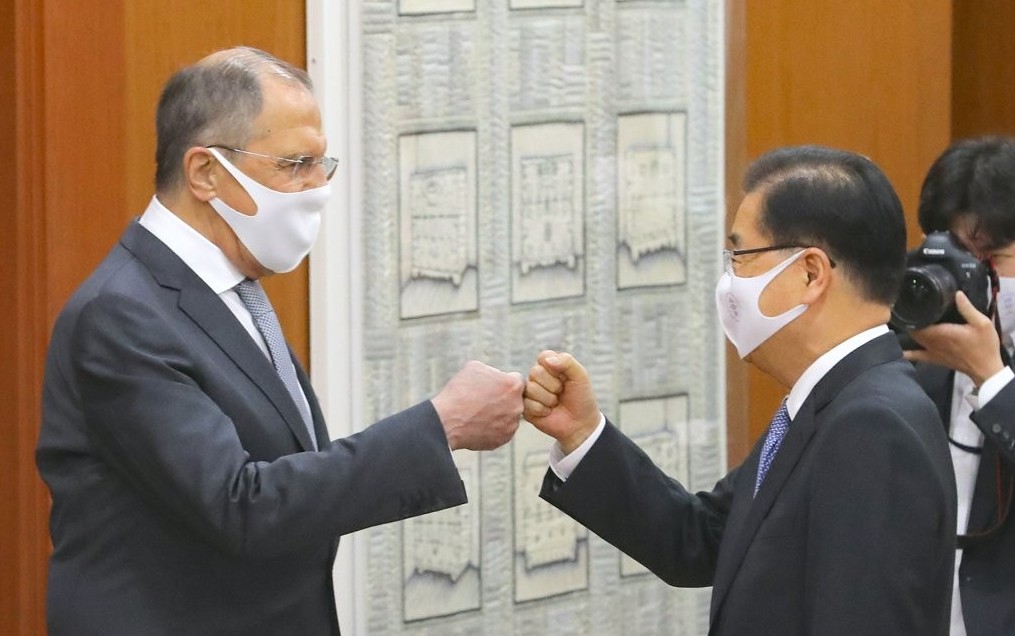 In this file photo, Foreign Minister Chung Eui-yong (R) and his Russian counterpart, Sergey Lavrov, fist bump each other at the foreign ministry office in central Seoul during the Russia diplomat's visit to South Korea on March 25, 2021. (Pool photo) (Yonhap)

Chung will arrive in Russia on Tuesday for a three-day trip and will hold talks with his counterpart, Sergey Lavrov, on Wednesday.

The two will meet for the first time since the Russian foreign minister visited Seoul in March this year.

The talks are expected to touch on recent developments on the peninsula as Seoul steps up its peace efforts.

Chung and Lavrov will exchange views on a wide range of matters, including bilateral relations, the Korean peninsula issue, cooperation in various fields, as well as regional and global issues, Seoul's foreign ministry said in a release.

Chung's trip is expected to "strengthen strategic communication with Russia and deepen friendly relations," it added.

The ministers will also attend a closing ceremony Wednesday of the Korea-Russia Year of Cultural Exchanges, which marks the 30th anniversary of the establishment of relations between the two countries.

The two countries had initially designated 2020 for the commemorative year, but it was extended to include this year due to the COVID-19 pandemic.

The relations between Seoul and Moscow were established on Sept. 30, 1990. (Yonhap)