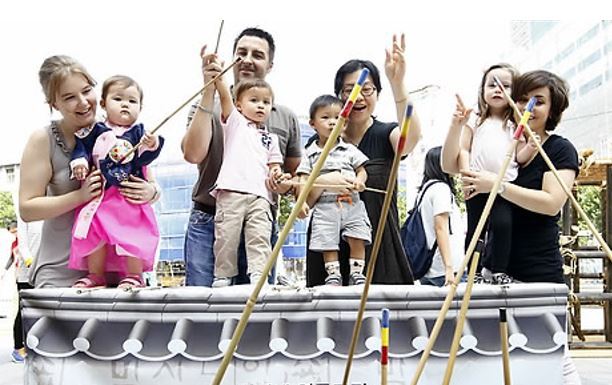 Foreigners experience “tuho,” a Korean traditional game, in Seoul in 2013, when the tally of expatriates staying in the nation topped 1.5 million for the first time. (Yonhap)
SEJONG -- US nationals are likely to make up the largest proportion of inbound foreign visitors this year, overtaking Chinese visitors, who have held the No. 1 position for more than a decade.

According to the Korea Immigration Service, the total number of foreigners who visited South Korea posted 747,813 for the first nine months of the year.

Data showed that almost 1 in 4 of the non-Korean visitors were US nationals: They made up 24.2 percent of the 181,558 people who visited Korea during the January-September period. 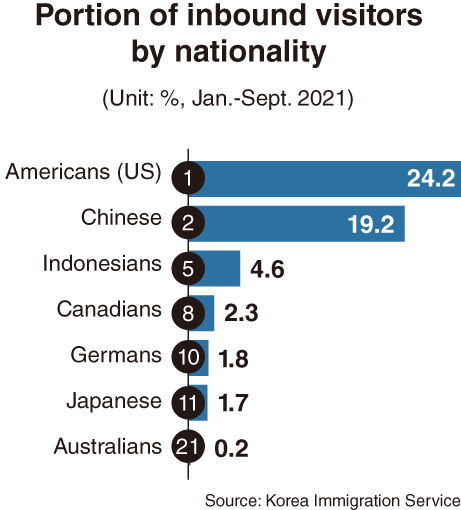 (Graphic by Kim Sun-young/The Korea Herald)
In contrast, over the corresponding period of 2020 the tally for visitors from China far surpassed that for the US, at 707,302 to 216,312. Americans ranked third on the list of foreign visitors by nationality, after the 434,961 Japanese visitors.

In 2019 and 2018 Americans were in fourth place, after Chinese, Japanese and Taiwanese.

“US nationals overtook those from Taiwan, Japan and China, in turn. This could be attributable to the unprecedented pandemic situation,” said a tourism research analyst.

He suggested that travelers in neighboring Asian countries may have been more reluctant than North Americans to visit Korea, pointing out the sharp increase in the number of coronavirus infections here involving the delta variant.

Next to Americans and Chinese, visitors from the Philippines placed third on the list at 84,012, followed by Myanmar nationals at 40,857 and Indonesians at 34,666. Next were those from Russia, India, Canada, Vietnam and Germany.

The number of visitors from Macao plunged 99.6 percent on-year to only 24 visitors over the past nine months. Hong Kongers, likewise, showed a 98.9 percent plunge to 984 visitors.

Overall, the tally of all foreign visitors fell by 69.6 percent on-year from 2.45 million during the January-September period in 2020.

Despite the sharp drop in arrivals, the number of foreigners "staying" in the nation as short- or long-term visitors (including residents) climbed for the second consecutive month, the Korea Immigration Service data showed.

The tally for expatriates staying in Korea came to 1.982 million as of September, slightly higher than the 1.976 million recorded in August and the 1.974 million in July.

Positive growth was seen in those two months after a 19-month fall that started in January 2020, when COVID-19 initially hit the nation.

The rebound, though meager, reflected the return of foreign students after weeks or months in their homelands.

But the number of foreigners staying in the nation as of last month remained at the same level seen in mid-2016.

Compared with December 2019, when the figure peaked at 2.52 million, the number of expatriates is down by 21.4 percent.

The number of long-term visitors (involving the resident-registered foreigners) -- those staying in Korea 91 days or longer -- slid from 1.73 million in December 2019 to 1.56 million in September 2021.